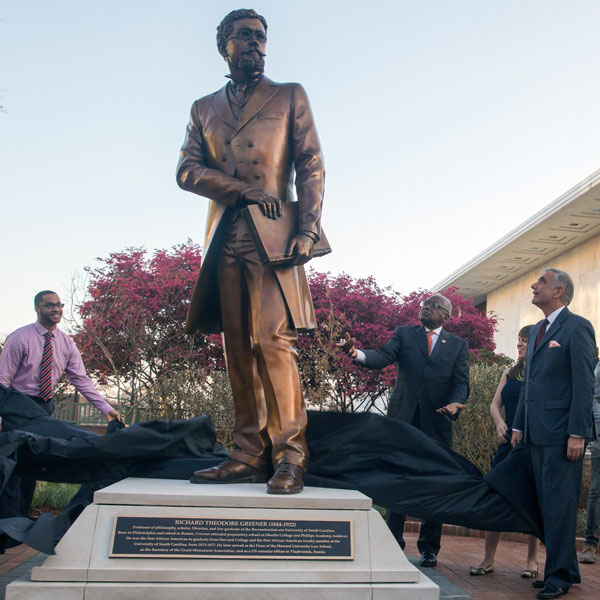 Congressman Jim Clyburn joined other guests for the inaugural Richard T. Greener Symposium and dedication of the Greener statue between Thomas Cooper Library and the Student Health Center.

Greener’s larger-than-life story is one of academic achievement, professional success and civic service, played out mostly in the tumultuous years after the U.S. Civil War. It’s a story of firsts — in addition to being USC’s first black professor, Greener was also Harvard’s first black graduate and America’s first black diplomat to a country of white citizenry.

But Greener’s story also encompasses the ugly racial politics of the Reconstruction Era and beyond that affected his career.

Ultimately, the statue of Richard Greener pays tribute to an educator, African-American advocate and pioneer whose affiliation with the University of South Carolina and the Palmetto State is cause for great pride.

“Not only is it the right thing to do to honor him, but this is the right place because the University of South Carolina was his first big appointment,” says Christian Anderson, a USC professor who teaches the history of education.

Raised in Massachusetts, Greener was befriended by wealthy white abolitionists who took note of his youthful intelligence and paid for his preparatory education at Oberlin College and Phillips Academy. He then enrolled at Harvard College and graduated in 1870. Though equipped with a Harvard degree, professional opportunities were limited for an African-American man, and he served as a school administrator and engaged in writing and advocating for racial equality.

His fortunes took a turn for the better in 1873 when he received a letter from the University of South Carolina, inviting him to join the faculty as a professor of moral philosophy. Greener arrived during the Reconstruction Era when federal troops occupied much of the South and ushered in sweeping changes. Carolina was one of the only Southern universities to admit African-American students during this time, an experiment that would last until the end of Reconstruction in 1877.

Greener was impressed by the Carolina campus and enjoyed teaching and serving as the de facto university librarian. In that unofficial role, he organized the library’s holdings, including thousands of volumes that had become disheveled during the Civil War. At his own expense, he tidied the dusty reading room in what is now called South Caroliniana Library, hanging large portraits on the walls and installing busts of prominent politicians such as Thomas Jefferson and John C. Calhoun and the Greek orators Cicero and Demosthenes.

“He accomplished some worthwhile things at the university in the few years it was open during Reconstruction,” says Katherine Reynolds Chaddock, a now-retired USC education professor who wrote a biography about Greener, "Uncompromising Activist," recently published by Johns Hopkins University Press. “He acquired scholarship money for poor students and established a preparatory program for freshmen.

“He even went to Howard University to recruit S.C. students who had enrolled there, inviting them to return to their own state for a college education at the now-integrated university.”

That era of integration was short-lived, however. Politics brought an end to Reconstruction, and with it, Greener’s appointment at Carolina. He would go on to serve as dean of Howard University’s law school, administrator of the Grant Monument Association (the New York memorial for the late president Ulysses S. Grant) and U.S. commercial agent in Vladivostok, Russia.

Except for the few years in which he served abroad, Greener often used his writing and oratory talents to eloquently advocate for equal rights of African-Americans. But his own place in history was complicated by attitudes about race and color, Chaddock says.

Still, 19th century writer and civil rights activist W.E.B. Du Bois hailed Greener as one of the “talented tenth,” the group of educated leaders at that time who led the struggle for racial equality even while the South was regressing toward Jim Crow segregation and racial disharmony.

Nearly 80 years after his death in 1922, Greener’s Carolina connection was revived during USC’s bicentennial celebration in a commissioned one-act play titled "The White Problem," which chronicled Greener’s life with the backdrop of 19th century racism. Greener’s original USC law school diploma and state law license were acquired by the university in 2012 when those documents were discovered in a steamer trunk in an abandoned building in Chicago.

Now a statue of Greener’s likeness, cast in bronze and on display at the university that welcomed him nearly 150 years ago, is located beside a busy sidewalk just east of Thomas Cooper Library. It is a salute to one man’s many achievements, but perhaps more importantly, the inclusion of a new chapter in the larger story of the university’s history, which grows in breadth with every generation.

Richard T. Greener at a glance...

• First African-American professor at the University of South Carolina, teaching  during the era of Reconstruction, 1873-1877.

• In 1873, he came to the University of South Carolina where he taught philosophy, Latin, Greek and law and served as librarian.

• Earned a bachelor of law degree from USC, among the first black graduates of the law school; admitted to the South Carolina Bar in 1876.

• After the university was temporarily closed  in 1877, Greener was a clerk in the Treasury Department in Washington, D.C., and a professor and dean of the Howard University Law School.

• USC acquired Greener's law diploma and license to practice law in South Carolina after those documents were discovered in an abandoned Chicago home scheduled for demolition.

• The Black Alumni Council has awarded a Greener Scholarship to an incoming student annually since 1983. 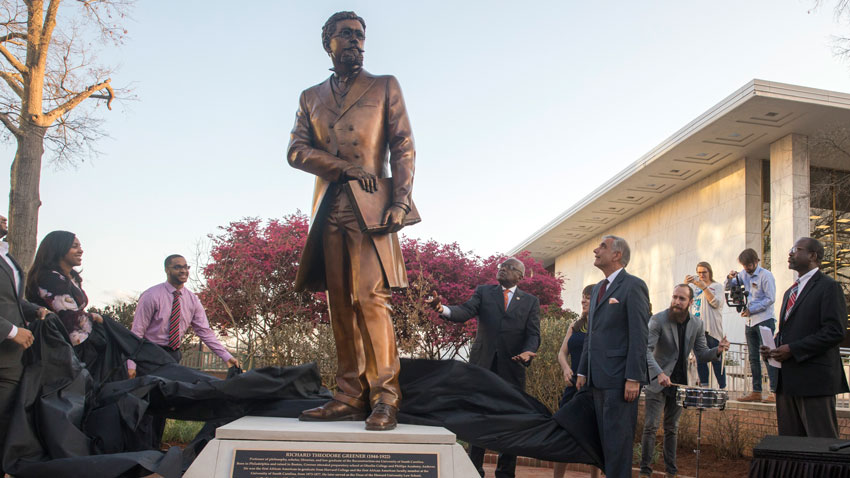