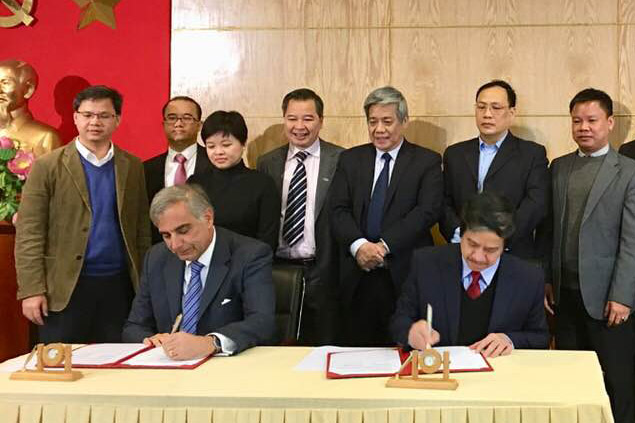 In January, President Harris Pastides signed a Memorandum of Understanding with Vietnam National University in Hanoi.

Growing up in North Vietnam, Huong Nguyen saw the problems surrounding her: The neighbor who drank too much, the childhood friend in an abusive relationship.

And the help they received was minimal — coming in the form of an admonishment from representatives of the women’s or veteran’s unions.

“They would approach it morally. ‘You shouldn’t do that, especially because you’re a member of the Communist Party — and you should not have these behaviors,’ ” Nguyen says. “Even as a child, I found that moral scolding was not working.”

Little effort was made to find the root cause of behavioral problems such as addiction or domestic violence. In the 1980s, poverty was widespread; people didn’t have enough to eat. There was no clean water and electricity was available only three nights a week.

“I always wanted to go into what I thought was community development,” she says. “We needed to change the communities in Vietnam.”

At that time, Vietnam didn’t even recognize social work as a profession — or even offer it as a course of study, so Nguyen went to college to study economics. Her hope was that an improved economy that was creating jobs would increase the standard of living. Because many social problems were linked to poverty, it was only natural to believe this was the solution.

As Vietnam emerged from a decades-long civil war, the country did become richer, but new wealth didn’t solve its social problems. That’s when Nguyen came to the United States to study. In 2010, she became the first person in Vietnam with a Ph.D. in social work.

Now an assistant professor in the College of Social Work, Nguyen also is the regional director for Vietnam and Southeast Asia for Global Carolina, an initiative of the provost’s office to increase the university’s international outreach.

The largest hurdle for the country is finding trained social workers. To that end, Nguyen is helping universities develop their social work programs. Last year, she reviewed six textbooks for Hanoi National University of Education to help enhance the college’s curriculum. 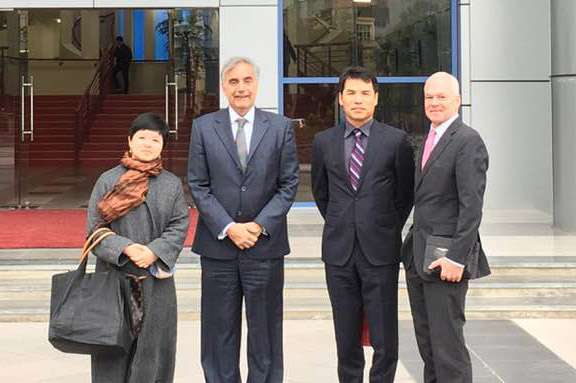 Collaborations with Carolina already have led the Ministry of Labor, Invalids, and Social Affairs to change services for people with disabilities.

“They told me that they applied ideas they learned from training courses at Carolina and changed policy,” she says. In the past few years, more than 40 top government officials from Vietnam have visited Columbia for courses in social policies and programs. Faculty from a number of disciplines, seven S.C. state departments and local service organizations have participated in this training.

In January, Nguyen traveled to Hanoi with a small university delegation, including President Harris Pastides, Haemoon Oh, dean of the College of Hospitality, Retail and Sport Management, and Kendall Roth, associate dean of the Darla Moore School of Business, to form a partnership between Carolina and three universities: Vietnam National University, Foreign Trade University and National Economics University.

“We’re proud of the work through our Global Carolina initiative to bring the world to Carolina and Carolina to the world,” Pastides says. “I’m excited about our recent Memorandum of Understanding with Vietnam National University and all the outstanding global and comparative teaching, research and service opportunities it will provide to our entire Carolina community.”

The agreement calls for an exchange between students in the Moore School and business programs in Vietnam, a beneficial proposition given a recent study that shows the country has one of the fastest-growing economies in the world.

For Nguyen, the potential partnerships with her native country are endless, not just in social work, but also in areas of public health, hospitality, culture and the arts.

“I hope we continue to expand this relationship,” she says. “Learning from each other — it just makes the world better.” 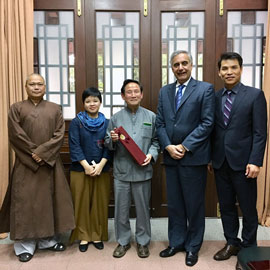 A contingent of Carolina faculty and staff are traveling to Vietnam over spring break to visit four universities. Each year, the Office of Study Abroad organizes trips for faculty and staff to learn about international research and collaborations and develop study abroad opportunities for  students. The International Perspectives on Higher Education also allows for a deeper understanding on how higher education systems outside the U.S. operate. John Brunelli of the Office of Communications and Public Affairs is part of the delegation and will provide updates during the trip.