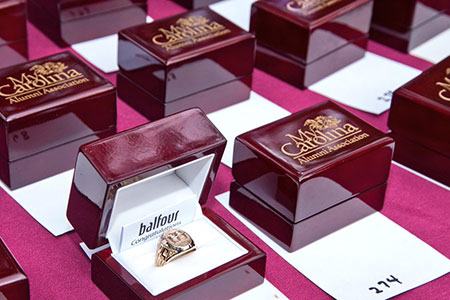 Students with 60 credit hours or more are eligible to purchase the official Carolina ring. Each semester, there is a ceremony on the Horseshoe to confer the ring upon those who purchased one.

On April 22, 500 students received their University of South Carolina ring at the Ring Ceremony on the Horseshoe. Delone Cramer and Greer Eddins are two students who took part in this classic Carolina tradition.

Cramer is a junior civil engineering major from St. Matthews, South Carolina, who has been involved in his Carolina community since freshman year. He has served as a resident mentor (RM) for the past two years, and he says he has seen a lot of growth in himself through that.

“I’ve seen growth in my public speaking and ability to look at things from different perspectives,” Cramer said. “As an RM, I’ve worked with different groups of people to help them get to know and love Carolina.”

Eddins is a junior who will be graduating in December. She’s originally from Cheraw, South Carolina, and is majoring in exercise science. For her, this ring serves as a way to connect with the bigger Carolina community.

“It makes me realize that I am going to graduate,” Eddins said. “It’s a way to network, and it makes me feel like I’m part of something.”

All Carolina students who get their rings do so for different reasons. For some, it’s a family tradition. Like Eddins, Cramer saw the ring’s networking potentials.

“I wanted one because I have my high school ring,” said Cramer. “The Carolina ring is very beautiful and spottable. If I see an alum, I can recognize the ring. It’s also a final commitment going into senior year.”

Eddins has been involved in Garnet Circle and the exercise science club during her time here and plans to pursue a career in physical therapy. Although graduation is nearing for her, she has enjoyed the time she has spent here.

“Any football game is just a great memory,” she said. “The student section is one big, happy family pulling for Carolina. Everybody on campus has at least one thing in common — their love for this school.”

Eddins said she considered waiting and getting a ring after graduate school, but when Carolina re-introduced the dinner ring, she decided she wanted it. This ring, she said, fits her style.

“I was glad they brought it back after so many years,” she said. “If someone’s debating getting one, I would recommend they do if they want something to have on them at all times as a tangible memory.”

It’s a way to network, and it makes me feel like I’m part of something.

As Eddins and Cramer begin to finish their college journey, they are both glad they ordered their rings. They say have loved their experience here, as well as the education they received.

“Carolina is a diverse group of people studying together,” Cramer said. “But they’re also getting to know each other on a personal level through their years here.”