You wouldn’t expect the new director of the Koger Center for the Arts to have a chemistry degree from the South Carolina Honors College. But Nate Terracio says his grounding in the sciences led him to his job running the university's cultural arts center.

And it helped to have a bit of theater training mixed in along the way. 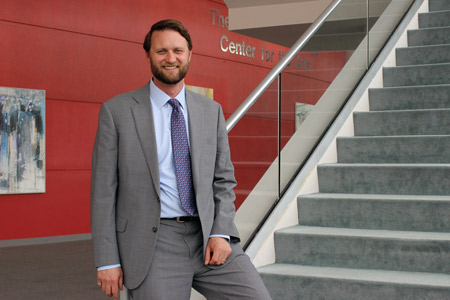 Nate Terracio has returned to his alma mater as director of the Koger Center for the Arts.

Terracio, who took over at the Koger Center this spring after longtime director Michael Taylor retired, first became interested in drama as a middle school student, performing in shows at Columbia’s Heathwood Hall. By high school, he also was helping paint scenery, hang lights and handle other behind-the-scenes work.

In his freshman year at the University of South Carolina, he describes himself as a “dedicated scientist,” not involved at all in the theater program. That changed in his sophomore year, when he was cast in the fall show, Moliere’s “The Learned Ladies.”

The production started his path to combine his two interests, with his theater colleagues all thinking he was a theater major — until they saw him doing his chemistry homework backstage.

“I liked chemistry a lot. I was one of those people who thought it was easy. When you find something interesting and you do well, it’s easy to like it. That’s chemistry for me. Even when it got hard, I liked it,” Terracio says. “And I can draw a direct line from that moment to here. A science and math background teaches you a specific way of thinking.”

His math and science training pulled him to the nonperforming side of theater. Running the light board or rigging equipment on stage required his math and physics skills. “Suddenly you see real-life applications for all the things you learned in your science career. By default, you become the go-to person” for production issues, he says. “And working in the tech side of things is how you get into the management side of things.”

Terracio’s path to arts management started after he left Carolina in 1997 with a bachelor of science in chemistry and a minor in theater, taking a gap year and traveling to more than 30 countries. He said the experience taught him how to survive on his own and how to thrive under pressure, solving day-to-day problems that were daunting and sometimes dangerous. Then he came back to work for the Aquila Theater Company, spending more than three years doing technical and management work, setting up productions in more than 200 theaters around the country.

“Touring is something that I would encourage anyone to do. It’s an amazing thing. You learn how to persevere through it. And you meet people and see things. You come in for one day, load the show, and then you’re out. So you have an idea about what’s unique about a building and what’s the same.”

He eventually stopped touring and worked some odd jobs in New York City before going to work as a production manager for Jazz at Lincoln Center, where he spent four years before heading back to Columbia in August 2016 to become the Koger Center’s assistant director.

“This job brought me back here. My mother should get the credit. Somebody pointed out to her they were looking for an assistant director at the Koger Center, which she quickly pointed out to me. We had a lot of family discussion about what it meant personally and as a career,” he says. “It seemed like too good an opportunity to pass up.”

Terracio has a history at the Koger Center. As a Carolina student, he performed with Susan Anderson’s USC dance company on the stage. His work on tours also included setting up shows at the Koger. Now, as the Koger Center prepares for its 30th anniversary in January 2019, Terracio is full of ideas for how he wants the center to continue to evolve.

“If I had to summarize my goal with the Koger Center into one thought it would be, ‘I would like people to feel the same way about it now in 2019 that they felt in 1989.’ People would say, ‘Did you see that thing at the Koger Center? And you were expected to have seen it. A reason for that buzz was the newness of it. Nothing can be shiny and new forever, the shine will come off literally and metaphorically. But I’d like us to be a destination people think of, an important part of the community’s life and an important part of the university’s educational outreach.”