The College of Nursing enhances its simulation lab by using actors 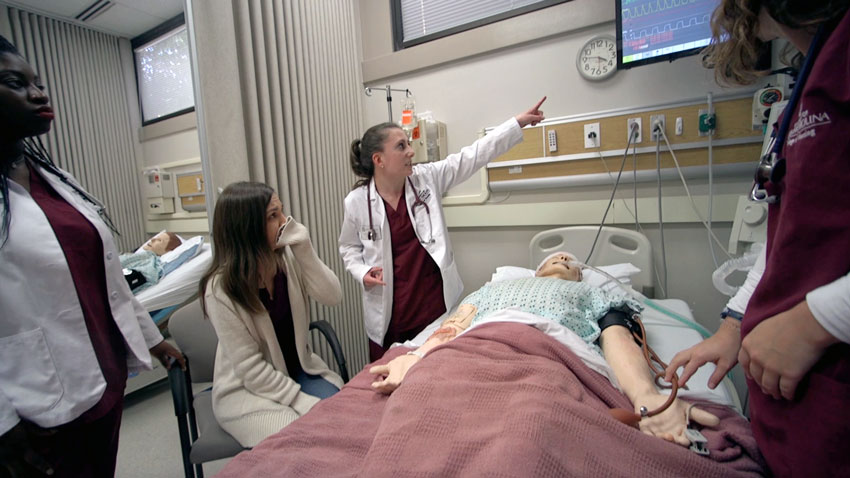 More than 45 years after graduating from the University of South Carolina, Lynn Cain still remembers what it was like the first time she walked into a patient’s room as a student nurse.

Her clinical instructor gave her information about the patient’s diagnosis, but she still felt overwhelmed.

“The patients are depending on you to help them,” Cain says. “You’re a new nursing student — you really don’t know what’s going on. It was scary.”

She went on to a career caring for patients through the entire circle of life — starting in pediatrics, working as an army nurse and finally ending up helping hospice patients.

In January, the UofSC became one of the first nursing programs in the state to start a simulated participant — or SP program. The College of Nursing hired more than a dozen “actors” like Cain, who feign sicknesses, ailments and in some cases pretend to be a patient’s relative.

“The students having the experience with a human gives them a genuine and authentic interaction that mirrors what it would be in the clinical practice,” says Crystal Graham, interim director of the clinical simulation laboratory.

The human element perfectly complements the mannequins that the simulated lab has used for years. By incorporating the actors in their training, the students have the ability to ask questions and more importantly listen to the responses. Graham estimates 70 percent of medical errors can be attributed to a breakdown in communications. She says the SP program gives Carolina graduates an advantage over students from other nursing programs in the state.

“I’m gaining a much more in-depth idea how to communicate and interact with patients,” says nursing senior Connor Lanigan.

While the conversations can be constructive, Lanigan and his classmates know they’re not working on life-and-death matters.

“They need to know when they come to the lab, that they can make mistakes, that mistakes are welcomed, and they’re actually viewed as pieces of the puzzle versus crimes to be solved,” Graham says.

Nursing faculty write a script for a scenario such as a patient having a heart attack. In that case, the SP spends a minimum of 2 hours learning that dizziness, fatigue, indigestion, nausea and tightness in the arm, chest and back are all symptoms. They must prepare not only the questions, but also how a heart attack patient would answer. SPs like Cain, the retired nurse, can easily anticipate the flow of the conversation.

For others, preparation is key. “I have medical background — in that I had a stent put in 15 years ago,” says SP Dale Alan Bailes. He also suffers from what he refers to as age appropriate ailments such as arthritic knees.

One night, a friend gave a detailed description of a heart attack. “I told him, ‘I’m going to use you in my job tomorrow — what you’re telling me, some of your dialogue,’ ” Bailes says.

Graham says the SPs need to understand the learning process and be engaging. In one scenario, the mannequin is a car crash victim who dies and the SP is the grieving widow. Nurses are often the ones left to comfort the survivor.

SP Ebony Bowers says she looks for both the balance between knowledgeable nurse and empathic caregiver. After each simulation, there’s a period when faculty and SPs can offer feedback to the students.

“If someone comes in and they’re being very cold, you can ask them, ‘were you trying to be matter-of-fact? Because this is how I felt as a patient,' ” Bowers says.

The training Bower received during the past 15 years as an SP at the USC School of Medicine also has proved useful in her everyday life: She changed doctors after interaction with a less-than-caring professional.