A freshman steps up to help his dad

Riley Lankes skipped the first Friday of class at the University of South Carolina last week, but don’t think for a minute that this Honors College freshman is a slacker. The international studies major was trying to save his father’s life. 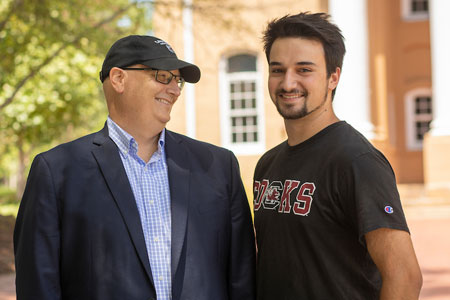 School of Library and Information Science director David Lankes, left, is getting a bone marrow transplant from his son Riley, an incoming freshman international studies major.

David Lankes, Riley’s dad, is director of the university’s School of Library and Information Science, who was diagnosed with lymphoma this past fall, his third bout with the cancer of the immune system. When his doctors decided that a bone marrow transplant was needed, they checked Lankes’ sister, but she wasn’t a match. Then they ran Lankes’ genetic profile through a database of 19 million registered donors — still no dice.

“Five years ago, that probably would have meant that a stem cell transplant would not be an option,” says David Lankes, who taught at Syracuse University for more than 20 years before joining the faculty at Carolina. Fortunately, advances in medical technology have made so-called 50-percent matches successful. Lankes asked his son Riley if he would consider donating bone marrow for the stem cell transplant and, without hesitation, Riley agreed.

“It would be easy to make this story about me and cancer and being brave,” David Lankes says. “But going through chemo and radiation and a transplant is not about being brave. It is what you do to survive. Bravery is looking at your entire world change around you and those whom you depend on fall apart — and not crumble or withdraw but thrive like my son has. I didn’t choose cancer, but Riley chose to be a donor. Riley is not just my donor, he’s my hero.”

Everyone has been so supportive ... I feel adopted by Carolina.

David Lankes, director of the School of Library and Information Science

Father and son went to Duke Medical Center late last week for the procedure. While his fellow Class of 2022 freshman were getting their first taste of college, Riley Lankes was lying face down in an operating room, getting bone marrow extracted from his hip bones and lower back. Stem cells from the marrow were infused into his father later in the day.

Riley Lankes was back on campus after the weekend, and David Lankes will continue treatment at Duke for several months. If all goes according to plan, the elder Lankes will be back home by the holidays, working from home in early 2019 and back in the saddle at Davis College, home of the School of Library and Information Science, by late spring. Dick Kawooya, an associate professor in the school, is serving as interim director until Lankes returns.

“It’s been an amazing outpouring of support from the faculty, from the dean and the provost. Everyone has been so supportive,” David Lankes says. “I feel adopted by Carolina.”

His son had a similar experience when he told other freshmen why he would miss the second day of class.

“There’s this outpouring from friends and people I just met in orientation and people I’ve met on my dorm floor,” Riley Lankes says. “When they see what you’re going through, it’s amazing what people are willing to offer to help — from helping to move you in, going to that second day of class to get the syllabus and take notes. It’s touching to see that from people you barely know.”

Anna Maria Lankes, David’s wife, says that community of support has been vital in facing cancer again. “We have found another support system here, with faculty and staff and with friends in our community,” she says. “It really does take a village to get through something like this.”

That nurturing environment is partly what attracted David Lankes to Carolina.

“We’re a top-ranked university, and we’re a designated community service/community impact university where you can do well and do good,” he says. “That’s why I’m thrilled that my son is going to be a Gamecock — and he’s going to be my immune system.”

The School of Library and Information Science is sponsoring a Be the Match drive in honor of David Lankes. The drive will add potential donors to the organization's marrow/stem cell transplant database. Marrow/stem cell transplants can be a cure for more than 70 blood diseases, including leukemia and sickle cell. Those between the ages of 18-44 can join the registry online or text Cure24 to 61474. University faculty, staff and students who register can share photos of themselves signing up by using the hashtag #SLIScares on social media.

Topics: Students, Faculty, College of Arts and Sciences, College of Information and Communications