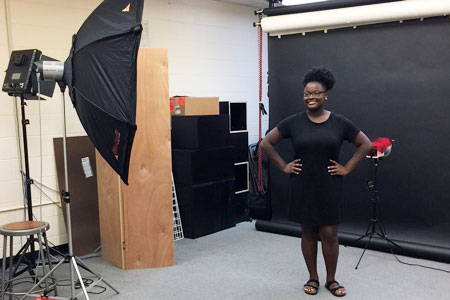 Lyric Swinton prepares to step into the spotlight.

Lyric Swinton is bubbly and animated, and when she talks she chooses her words deliberately and infuses them with passion. People want to listen to what she has to say, a quality that helped her become the only undergraduate speaker at TEDxUofSC.

Swinton never expected to be in this position, it wasn’t even her idea to apply to speak. In her mind, these types of opportunities were something only offered to older folks — people who had already led a successful life, not a third-year sport and entertainment management major.

The day of her interview did not go as planned. It was a hot spring day in Columbia, she missed her first appointment time and she ran out of material for the topic she originally planned to speak on during her interview.

Despite all these complications, Swinton wowed the judges with her improvisation skills and her personal anecdotes about one particular topic.

“I started talking about stereotypes, and how they’re passed onto us, but also how we pass them on to other people. So I was speaking on how I’ve been stereotyped but also stereotyped other people, and how I realized I was wrong,” Swinton says. “I shared stories about how people were completely different from what I thought they were going to be and how that experience made me a better person.”

This new topic that TEDxUofSC organizers wanted her to speak about was something she was fully equipped to do. As the secretary of inclusion and equity in student government, this is a subject that Swinton regularly researches and has had to deal with her entire life as a young African-American woman.

“The higher up I get in leadership on campus, a lot of the time, I am the only minority in the room,” Swinton says.

Growing up in a low-income area of Columbia, she rarely saw people who looked like her succeeding in higher education.

“A lot of times when people went to college they literally would go to just be students,” Swinton said. “They never felt like 'Let me apply for Student Government, let me take those leadership roles.' They felt like they were a number.”

Swinton says she has been helped by UofSC’s Opportunity Scholars Program to make the most of her time here at Carolina.

Having a role as a speaker at TEDxUofSC is an accomplishment Swinton is excited to be a part of both personally and professionally. She understands that it will help her gain recognition, but she’s also pumped to hear the other speakers, too.

But mostly she wants to use this opportunity to prove a point to those back home.

“I know there is someone in my community right now, sitting in my old elementary school, being told that 'you’ll never be more than your circumstances,' but I hope that I can be a testament that 'you can see past that, that you can eventually do anything you want to if you put your mind to it,' ” Swinton says.

Tickets for TEDxUofSC will go on sale online at noon Aug. 22. Tickets are $25, but students get a 50 percent discount when they use the code tedxstudent at the time of purchase. You will need your Carolina Card to enter the event with student ticket.