As a Carnegie Foundation top-tier research institution, The University of South Carolina attracts talent from around the globe. But it’s not just our reputation that draws researchers to the Palmetto State. The university’s location provides unique opportunities for scholarship and collaboration. Our series of stories about research that can only be done here originally ran in USC Times this fall.

Along the coast of South Carolina, in Georgetown County, University of South Carolina researchers have been methodically testing the waters for 40 years – learning the workings of a salt marsh estuary and the impacts humans have on the environment. 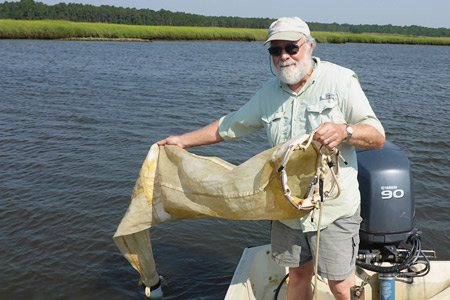 Dennis Allen retired this summer as the director of the Baruch Marine Field Laboratory near Georgetown, South Carolina.

Researchers at the Marine Field Laboratory, the coastal research facility of the Belle W. Baruch Institute for Marine and Coastal Sciences, sample the wide range of physical, chemical and biological characteristics of the relatively pristine North Inlet estuary and compare them to other more developed coastal waterways.

Bordered on the east by the Atlantic Ocean and the south by Winyah Bay, North Inlet has been probably the most continuously and comprehensively monitored estuary of its kind, certainly in the United States. Regular measurements have been made for the past 40 years. The long-term study started with National Science Foundation funding and has continued with NOAA’s support for the North Inlet-Winyah Bay National Estuarine Research Reserve.

“As we analyze the trends and the relationships among these ecosystem variables, we’ve been able to put together a rather clear indication of sea level rise, increasing air and water temperatures and changes in rain patterns that have had an impact on the North Inlet estuary,” says Dennis Allen, who retired this summer as research professor in the School of the Earth, Ocean and the Environment and as director of the Baruch Marine Field Laboratory.

It takes the perspective of a decades-long study to really be able to detect changes in things like vegetation, water chemistry and growth rates, reproduction, and migration habits of animals in the water, says Allen, who continues to conduct research even after retirement.

“By taking measurements in North Inlet — and up and down the coast in more developed landscapes — Baruch scientists have generated information that’s helpful to understanding what’s going on,” he says.

The technical analysis of work done at Baruch, home to one of the few long-term estuarine data sets available anywhere in the world, is communicated widely in scientific journals and at national and international conferences. It also is shared through educational activities at various levels, including the NOAA-funded estuarine research reserve program, in language that is more useful to non-scientific audiences.

“People on the front line are generally hungry for information that will help them make good decisions for striking that balance between the needs of society and the need to maintain the ecological integrity of these systems,” Allen says. “It’s really fun to see people put to work the things we’ve learned about. For instance, the impacts of runoff from the landscape on the salt marsh and its animals and its chemistry can be significant. Storm water management is a big topic and many improvements have been made.”

For Allen, who has worked at Baruch for 40 years, it’s not an easy job to leave.

“Once a scientist, you can’t walk away from it,” says Allen, now a distinguished research professor emeritus. “The nature of my work has been to generate these long-term information series. There are still samples to be processed on the microscope and analyses of the data to do before the complete 40-year story can be published. I expect to be busy for some years to come.”