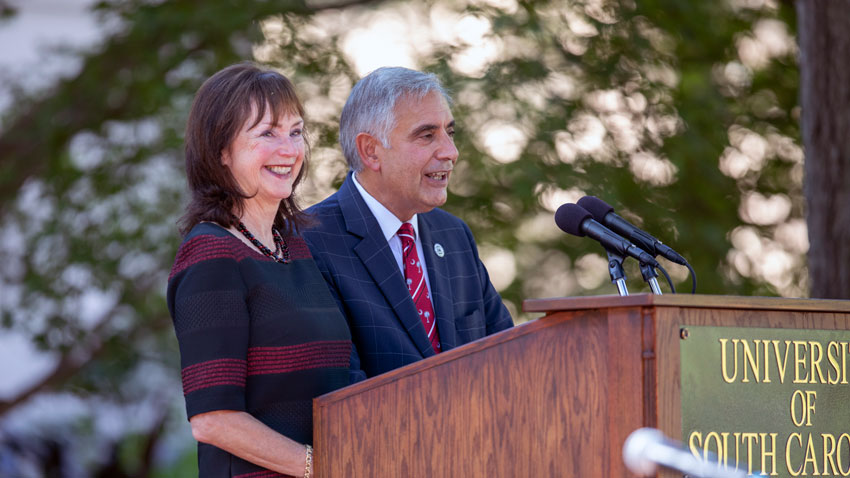 After a decade of service as president and leading the University of South Carolina through an unprecedented period of growth and success, President Harris Pastides announced Wednesday (Oct. 3) that he will retire as president effective the summer of 2019.

The announcement was made at the annual State of the University address on the Columbia campus’ Horseshoe, the 11th speech of its kind Pastides has delivered as president. Pastides used the occasion to fondly reflect on his tenure as well as thank those who helped him move the institution forward despite taking the helm during the largest economic downturn in a generation and rapidly declining state support.

“No one can expect the good fortune to serve in any position for 10 years — it’s a significant amount of time in any personal career, let alone a college president serving in turbulent times,” Pastides said. “But as important a milestone as this is for me personally, it’s more importantly a reminder about the ways we’ve stood strong and resilient through many challenges and many storms to create an even greater university from the great one it was 10 years ago.”

While the decision to retire as president was not easy one, Pastides said the timing makes sense given his family obligations, the university’s positive momentum and its current attractiveness to potential successors.

Pastides began his journey at Carolina when left the University of Massachusetts, Amherst in 1998 to join USC as a professor and dean of the Arnold School of Public Health. He later served as vice president for research, and eventually succeeded Andrew Sorensen in 2008 as USC’s 28th president.

There is nothing more powerful and more motivating than a conversation, a high five, a selfie, or a “thank you” from a Gamecock student … serving our undergraduate and graduate students, here and throughout the system, and watching them graduate, has been the privilege of my lifetime.

Harris Pastides, 28th president of the University of South Carolina

Over the course of the ensuing decade, Pastides led the USC system through record enrollment growth, including enrollments of South Carolinians and African American students; new levels of student academic success and improved graduation rates for all students, including underserved minorities; a renewed commitment to academics and faculty recruitment; the expansion and capital improvement of the Columbia campus and beyond; new corporate research partnerships with Fortune 500 companies; and a record-setting $1 billion fundraising campaign.

While the accomplishments are many, it was daily personal engagements with students that the Pastides’ say they cherish above all.

“There is little doubt that the greatest rewards came from the students,” he said. “There is nothing more powerful and more motivating than a conversation, a high five, a selfie, or a “thank you” from a Gamecock student … serving our undergraduate and graduate students, here and throughout the system, and watching them graduate, has been the privilege of my lifetime.”

The State of the University address also highlighted areas Pastides will continue to advance during his final year in office, including improving student safety, the ongoing dialogue about the Higher Education Opportunity Act and expanding on-campus housing options. He also said he plans to stay involved in teaching at USC after his presidential tenure ends.

“Our university is fortunate to have had more than a decade of innovative and impactful leadership from President Harris Pastides,” von Lehe said. “He met challenges head on and turned them into successes. It wasn’t enough to survive, he insisted that this institution thrive. And thrive we have.

“We educate more South Carolinians and more students than ever before, driving South Carolina’s economy with in-demand and highly employable graduates. We offer new pathways to accessible and affordable baccalaureate degrees. We’re a destination of choice for students from across the country and around the globe. Harris has changed the lives of one-third of our living alumni, with 100,000 students graduating under his leadership. I’m sure that will be his proudest accomplishment.”