In the nearly 30 years since the first Gulf War in Kuwait and Iraq, medical professionals have struggled to identify the cause for symptoms collectively referred to as Gulf War illness that have persisted among a quarter-million military veterans, long after their return to the U.S.

The fatigue, muscle pain, memory and other neurological impairment, rashes and diarrhea that are hallmarks of the illness might stem from exposure to environmental agents, including anti-nerve gas drugs, pesticides, smoke from burning oil wells and depleted uranium munitions. Subsequent studies have been inconclusive, and effective treatment has been elusive. 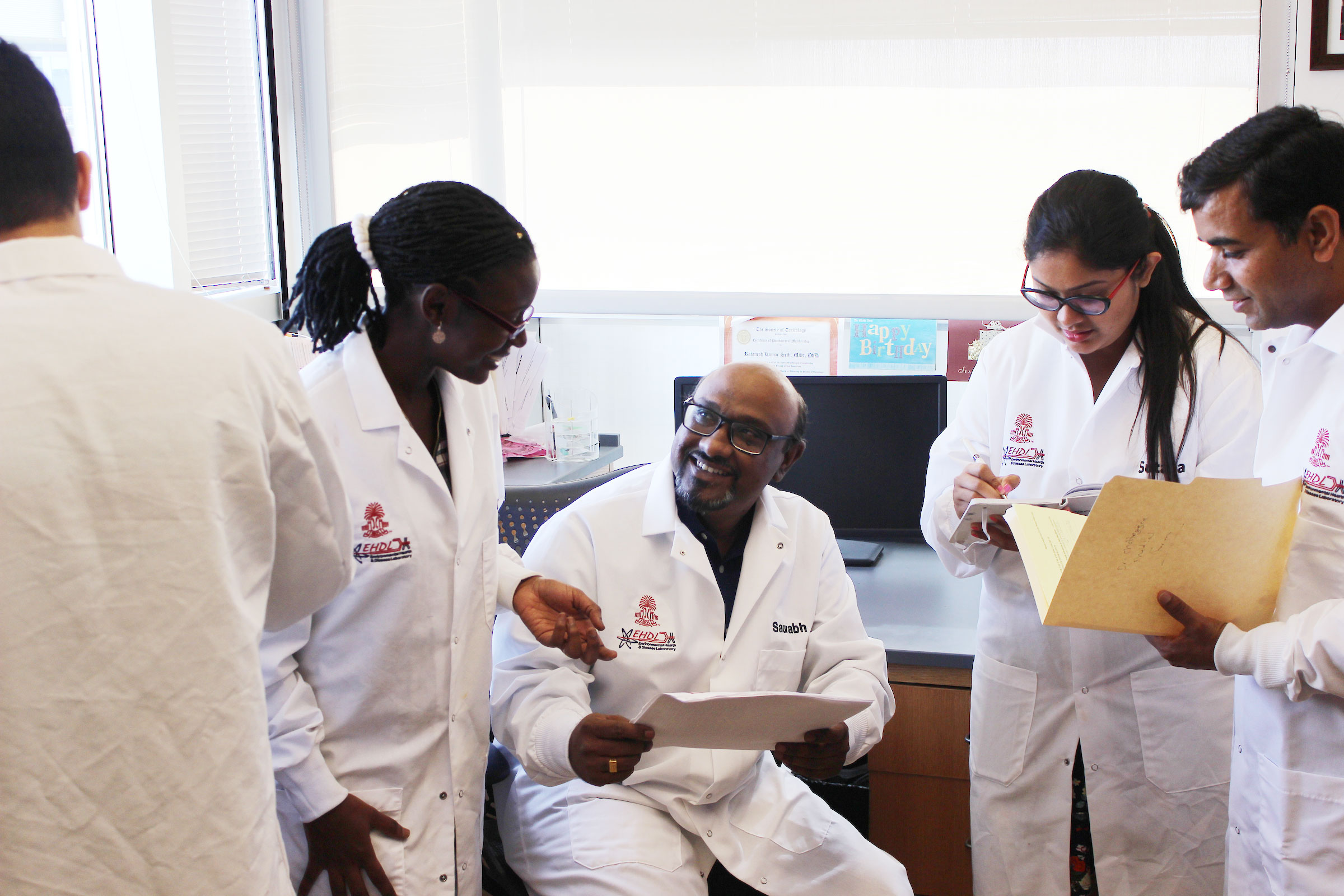 Saurabh Chatterjee, center, and his research team found the root problem of Gulf War illness is an altered gut microbiome, which can likely be treated with existing medications.

Saurabh Chatterjee can’t identify the cause, but he thinks his research team at USC’s Arnold School of Public Health has found the locus of medical dysfunction. And a landmark study that Chatterjee’s team published this year in Toxicology and Applied Pharmacology points the way to an effective treatment.

“About four years ago, we began trying to detect the pathology of Gulf War illness, and we wondered if the root of the problem was in the gut,” says Chatterjee, an associate professor of environmental health sciences and director of the Environmental Health and Disease Laboratory.

Experiments using rodent models followed, revealing that the normal bacterial ecosystem in their gut was dramatically altered by the same elements to which Gulf War veterans had been exposed.

“What we found is that the altered gut bacteria and their cell wall components seep into the circulatory system and causes neural inflammation,” he says. His team published a paper on their findings last year in PLoS One, which prompted an outpouring of interest from veterans and veteran organizations.

“More than 25 years have passed already [since the conflict] so we should be going for a cure, but I didn’t want my research team to try to develop a new drug — that would take too long,” Chatterjee says.

Instead, they used the same research model and found that butyric acid — an off-the-shelf, FDA-approved drug commonly used to treat inflammatory bowel disease — helped restore the gut microbiome to a more natural state. After the team’s report was published, the Department of Defense and Veterans Affairs funded Chatterjee’s research projects to help facilitate drug discovery in Gulf War illness.

“We are extremely close in exactly matching the alterations in gut microbiome of mice with hundreds of veterans — there is no use in doing more mice studies to find the pathology,” says Chatterjee, adding that human trial studies with butyric acid could begin in the next year with help from the Veterans Affairs office in Columbia and research collaborators in Boston and Miami.

“It’s been so many years for these veterans — they need relief.”