USC welcomes thousands of out-of-staters each year, many stay and have big impact on the Palmetto State

Each fall, thousands of new students come to the University of South Carolina from out of state, and a lot of them later make a permanent home here, improving our communities and benefiting our economy. It’s the exact opposite of brain drain, and one of many reasons the Carolina family is so vibrant and diverse. This is one in a series of stories first published in USC Times in which we spoke to successful alumni who came from out-of-state and fell in love with their adopted home. 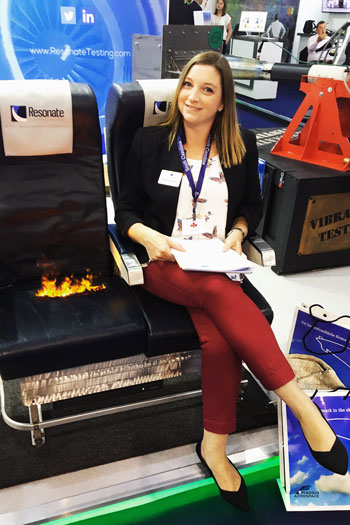 Adrianne Beasley combines her love of adopted state with a desire to see more diversity in aerospace employment in her work with the South Carolina Council on Competitivenes.

I was a day student at Salem Academy, an all-girls boarding school in Winston-Salem — a class of 50, where everyone knew everyone, and all the teachers knew everything about you. So my priorities looking for a school, first and foremost, were “co-ed” and “a school large enough that I could kind of fly under the radar.” I was looking for a big state school where I could figure out what I wanted to do instead of having it so clearly laid out. I knew I wanted to go into business and study finance. The Darla Moore School of Business had an incredibly good reputation — still does — and it seemed like the perfect fit. It was just far enough away from home and had a really strong business program and a big enough campus that I could try out different things.

I was a competitive horseback rider growing up, so I knew I wanted to find a barn where I could ride, help out and maybe teach some lessons. I ended up at Three Fox Farm, which was a really great side job because I got to do what I loved, and I got to meet many interesting parents, like Russ Meekins (executive director of the USC University Foundations until his death in 2017). His daughter rode at Three Fox, and he was there often, taking pictures and cheering her on. When years later I moved back to Columbia and began working at USC in the McNAIR Center for Aerospace Research,

I got back in touch with Russ and he became one of my mentors. It’s funny that one of the reasons that I wanted to go to a big school was the anonymity, but I ended up finding my own little tribe.

I also got really involved with Delta Sigma Pi — the business fraternity — which really paid off when I went for my first “real job” interview at HEICO Parts Group in Hollywood, Florida. The president of the company, who of course was quite a few rungs of the ladder above me, sat down and said, “I had to come in to meet you because I saw Delta Sig on your resume and I was in Delta Sigma Pi at the University of Utah.” It’s one of those networking stories people tell when they’re trying to recruit you, but you never meet somebody that it actually happens to.

So I broke into this very male-dominated industry of aerospace, doing financial analysis in mergers and acquisitions for an after-market parts supplier, HEICO.

A couple of years after we moved back to Columbia, the university opened the McNAIR Center, and I saw the opportunity to combine my love for USC, my experience in business development and my experience in the aerospace industry.

Seeing the lack of diversity in aerospace and engineering, one of my biggest passions is talking to underserved communities and female students about opportunities available in aerospace. I help with STEM (science, technology, engineering and mathematics) development projects and talk to students about what it means to be in this career. It’s hard when you don’t see someone at the head of the table who looks like you automatically get the message that’s not the place for you.

But some companies, like Boeing, are working hard to make diversity and inclusion part of their culture throughout the company. Joan Robinson-Berry, vice president of engineering, modifications and maintenance for Boeing Global Services and former vice president and general manager of Boeing South Carolina, is an example of that — she was named among Women’s Enterprise magazine’s 2017 Top 100 leaders in corporate supplier diversity as well as one of the Most Powerful Women in Business by Black Enterprise. She is incredibly inspirational to so many students, and I think as we see more of those ceilings being broken, we will see more diversity in the pipeline.