Students in middle school learn about careers in pharmacy

More than 40 middle school students recently visited the College of Pharmacy to envision what their future could be. All of the students were female and mostly African-American, part of the college’s efforts to attract underrepresented minorities to the profession.

“People are more likely to connect with pharmacists who ‘look’ like them,” says Amy Grant, associate dean for student affairs and diversity.

Grant says there’s a strong need to reach students during the middle school years so they’ll know how to prepare academically if pharmacy is part of their long-term plans.

Students in high school must have an exceptional grasp of science and math to be admitted into the Gamecock Pharmacy Assurance (GPA) program, designed for early admission to the Pharm.D. program. That strong foundation is needed since GPA students must pass courses in general chemistry, organic chemistry, physics, calculus, statistics, biology, human anatomy and physiology early in their college career.

Third-year pharmacy student Tej Patel was in middle school when he decided on a career in health care. Patel wanted to be a dentist. But it was a trip to the drug store in high school, ironically to fill a prescription from the dentist, which made him change his mind.

Patel, who grew up in Florence, S.C., says his interaction with the pharmacist was eye-opening. 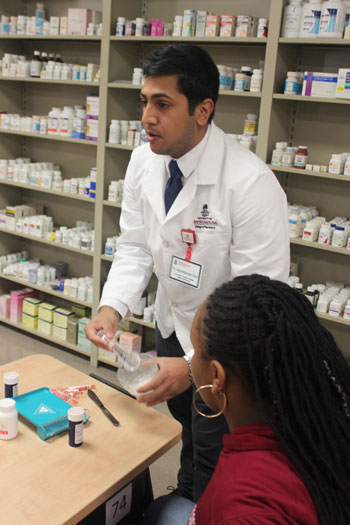 Third year pharmacy student Tej Patel demonstrates how to use the mortar and pestle.

“They told me what to do, what to expect from the medicine—that it would make me sleepy, advised me not to take before school,” Patel says. “And they told me to come back if I had any questions.”

Patel realized pharmacists deliver the same level of care to patients as other medical professionals. But he still kept his options open, choosing the University of South Carolina with its 100-plus health science programs. He knew that if he changed his mind that he could easily switch to another area of health care.

One objective of outreach to school children is to change some common misconceptions about the field.

“Most lay persons only think of drug stores when they think of a career as a pharmacist,” Grant says. “It is important to expose young people to the approximately 30 fields of pharmacy that exist so they can consider it as a career option,” Grant says.

Patel and several current third- and fourth-year students led the students from W.A. Perry Middle School in Columbia in a number of hands-on demonstrations. They used mortar and pestle to triturate candy similar to how pharmacists compound medicines.

“It is great for them to put into practice pharmacy skills they have learned in curriculum,” Grant says.

She says pharmacists can switch between the various fields within the profession and have the opportunity to live anywhere.

“Young people often think of careers in the health care field but often forget that pharmacy is a fantastic career that leads to a doctorate degree and a lucrative salary,” Grant says.

“The opportunities the college offers outside of courses are just as important to their development as future pharmacists,” she says.

That’s especially true for Patel, who will begin the Professional MBA program at the Darla Moore School of Business while finishing the Pharm.D. program. He hopes that will widen his options if he decides he wants to work for a pharmaceutical company.