No bigger than a minnow

Alzheimer’s, autism and schizophrenia are very different neural disorders but they have this in common — scientists are learning more about each condition by studying the neural development of zebrafish. 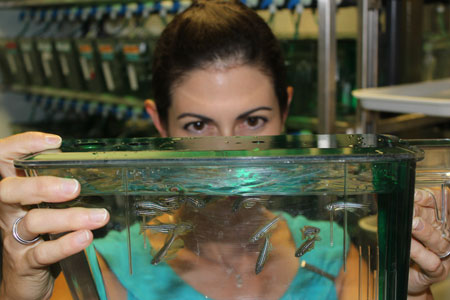 Biology assistant professor Fabienne Poulain holds a tank of zebrafish, whose neurons can be directly visualized during embryonic stage.

Barely the size of a small minnow, the zebrafish is the ideal model for such research because its nervous system matures quickly — in five days — and its embryos are transparent, allowing the direct visualization of developing neurons. Fabienne Poulain, an assistant professor in the biological sciences, maintains a colony of some 6,000 zebrafish as part of her basic research on neural development.

“We’re studying how the neural system forms in early stages, as neurons extend long processes called axons to communicate with each other,” says Poulain, who joined the University of South Carolina faculty in 2015. “If there are errors in that neural wiring process in humans, it can subsequently lead to defects that may contribute to diseases such as autism spectrum disorder.”

Poulain is especially keen on understanding how axons grow, connect to their appropriate targets and sometimes are eliminated after making mistakes, a process called pruning. Her latest research, supported in part by the National Institutes for Health, focuses on visual system development, particularly the retinal axons that form the optic nerve.

“During development, some of these retinal axons make mistakes as they elongate and are subsequently pruned,” she says. “Our latest discovery is that the molecules that instruct these misguided axons to degenerate are the same molecules that have been associated with autism spectrum disorders and schizophrenia. “We might discover new findings about what goes wrong in the nervous system when these molecules are mutated.”

The Poulain lab is part of the Center for Childhood Neurotherapeutics led by biological sciences professor Jeff Twiss, and participates in the South Carolina Autism and Neurodevelopmental Disorders Consortium. Poulain traces her interest in neural development to her teenage years, when she became fascinated with behavior and the human brain. She became obsessed with understanding how such a complex organ defining who we are forms and matures from conception to adulthood.

“That has always been one of the most fascinating questions,” she says, “I came to USC because we have the opportunity to build a strong neuroscience community here, especially in the biology department where many new faculty are being recruited.”