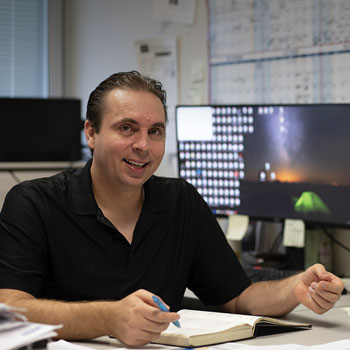 “When oil prices are low, it’s hard for alternative energy to compete, but we’re still learning new techniques that will be useful in the future.” — Andreas Heyden, chemical engineering professor

Most of us look at a pile of mulch and see ground-up tree bark and wood fibers. Andreas Heyden sees a potential energy source. The chemical engineering professor’s research is focused on developing specialized catalysts capable of breaking down biomass such as mulch and animal waste into renewable fuels.

“The question is how do you design and use catalysts that have efficient conversion rates and aren’t themselves degraded by the complex chemical reactions taking place to unlock the energy in biomass,” Heyden says. “We used an ASPIRE II grant to start talking with computer scientists about using more machine learning and data science techniques for catalysis applications.”

Machine learning accelerates the catalyst design process by helping scientists predict the molecular interaction of various species on a catalyst’s surface based on a database of prior research. The chemical processes involved in converting biomass to energy are complex, Heyden says, and data science leads to more efficient modeling of next-generation catalysts.

Collaboration with computer scientists has proven fruitful for Heyden’s team, which has garnered substantial NSF funding through an ongoing research partnership with the University of Puerto Rico. The focus of their energy conversion research has been on waste stream products such as biomass and animal waste, which don’t compete with food production like some common energy conversions now in use (e.g., corn to ethanol).

“There are companies out there doing some of this, but it’s all dependent on oil prices,” Heyden says. “When oil prices are low, it’s hard for alternative energy to compete, but we’re still learning new techniques that will be useful in the future.”