An international workshop at the University of South Carolina this past weekend challenged participants to consider the future of music in higher education by reimagining curriculums for the 21st century. The sold-out event, Carolina/College Music Society Summit 2.0, was built around a design challenge to develop creative solutions for relevant, thriving music programs. 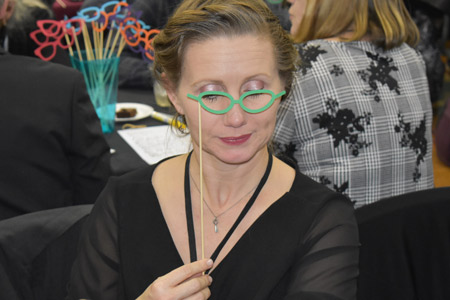 “In the 20th century, many universities seemed to ask, ‘What makes our school essentially identical to every other, only a little better or a little worse?’ But in the 21st century, we want to focus on what makes us stand out,” says summit director and UofSC professor of music entrepreneurship David Cutler.

The summit focused on “values and choices,” culminating in a team competition between three imaginary campuses. Each team was assigned a set of campus values, such as collaboration and technological integration. Their challenge was to devote 100 teaching hours to their distinct values. But there was a twist — teams could not change any classes or credit hours from the current curriculum. To make room for their additions, they had to subtract 100 hours of teaching activities within a syllabus of existing courses.

The design challenge was presented as a GAME (Guidelines, Arena, Materials, Experience), which incorporated a specific set of criteria. Teams employed a host of tools developed by Cutler including “Great Gaming Goggles,” which are colored glasses worn by participants to represent different steps in the brainstorming process and align teams behind a single problem-solving “lens.” The groups also were challenged to rethink how resources are distributed.

Though the GAME was called “What do you stand for?” it implied another question: “What don’t you stand for?” Committing to not doing something traditional can feel scary, but participants were encouraged to experiment, dream and consider the radical.

“That’s the hard part,” Cutler says. “Leadership is about saying no to good ideas, to embrace one set of distinct values at the expense of a thousand others.”

The summit pushed participants to think differently, change their expectations and lower their tolerance for the status quo, says summit participant Sheelagh Chadwick, co-chair of the Joint Department of Music Education at Brandon University in Manitoba, Canada. He described the event as intense and impactful.

“It has given me the courage to defend what I believe music education can be in the 21st century and to start charting a course for ways to make those beliefs a reality,” Chadwick says.

This year’s summit was the second hosted by the School of Music. The first, held in 2016, challenged teams to develop new degree programs for the 21st century. 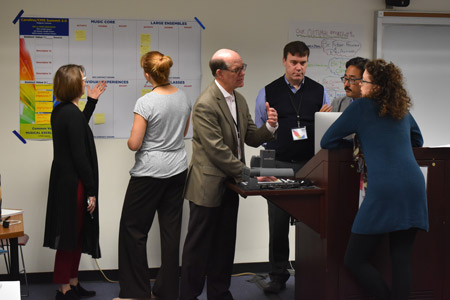 Summit participants collaborate to re-imagine the next steps in music higher education.

“We were excited to again develop and host our nation's most impactful workshop on the future of music in higher education,” says School of Music Dean Tayloe Harding. “The summit provided 240 music faculty members and administrators from virtually every kind of collegiate institution across North America the opportunity to reimagine their school’s impact.”

While the audience for this event was music faculty members and administrators, the summit provided strategies for collaboration, innovation and making hard choices that are equally applicable within other disciplines.

“Higher education at large – as well as most other organizations – must change to remain relevant,” Cutler says.

Summit participants are intentionally diverse — in their experience and their disciplines — to create an engaging and dynamic environment in which to share their perspectives and ideas about the way we teach and learn in music higher education, according to Bill Pelto, executive director of the College Music Society.

Cutler’s goal for the event is to help music schools evolve and stay relevant.

“Music in higher education historically has made such a positive impact,” Cutler says. “Moving forward, how might we better prepare students and communities for a success? And how might each and every one of us play a proactive role in making positive change? The need for change may be urgent, but the opportunity to lead is exciting.”