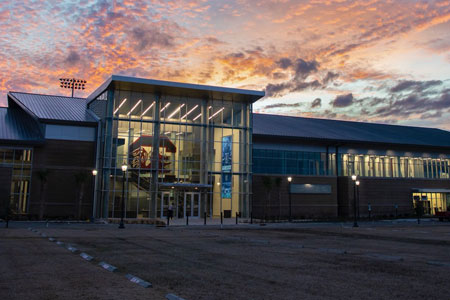 The Cyndi and Kenneth Long Football Operations Center is both a workplace and a game changer, according to head coach Will Muschamp. Athletics director Ray Tanner calls it efficient and effective.

Taking the new Cyndi and Kenneth Long Family Football Operations Center from concept to completion was a team effort that promises a big win. The 110,000-square-foot facility in Gamecock Park will transform the student-athlete experience for football players at the University of South Carolina, Athletics Director Ray Tanner says.

Planning was underway for the comprehensive facility when Head Coach Will Muschamp joined the Gamecocks in 2015 — just in time to put his own stamp on it, Tanner says. Muschamp immediately engaged with the building’s architects, engineers and designers to craft a space that would fully meet the needs of football players, coaches and staff, all under one roof.

“He calls it a workplace, a game changer,” Tanner says. “For me, it’s efficiency and effectiveness. When a player reports to practice, everything is within a stone’s throw, whether it’s the training room, the nutritional areas, the head coach’s office, the assistant coaches’ offices, the hydrotherapy area — you name it, it’s all there.”

The facility is adjacent to the Jerri and Steve Spurrier Indoor Practice Facility and two outdoor practice fields and sits just across Bluff Road from Williams-Brice Stadium. Its layout is designed for efficient navigation, so student-athletes and coaches have ready access to each other and to the training and meeting spaces they need.

For recruiting purposes, Tanner says, the building “exudes our commitment to your experience here as a student-athlete,” promising the resources to help players compete and perform at their highest level.

That philosophy is what inspired alumni Cyndi and Ken Long to make the lead gift for the football operations center. Long has been attending USC sporting events since he was a young boy. Carolina, he says, was his “landing spot,” as he grew up working at his father’s pharmacy, the original Long’s Drugs at Sumter and Pendleton streets, across from the Horseshoe. The family have been members of the Gamecock Club for more than 40 years and have long supported the university’s athletic programs.

“That’s the thing that makes us happiest — you come to USC, and you have the opportunity to be the best you can be,” says Long, executive chairman of Long’s Drugs. “To see all our teams playing better, our athletes being educated better and taking a step forward after attending Carolina — we enjoy supporting that.”

Long notes that “it takes a lot of Gamecocks” to make a project like the football operations center become a reality. Tanner, too, says many donors stepped up to fund the new facility.

Key features of the new facility include a 20,000-square-foot, two-story weight room; a cardio balcony overlooking the weight room and outdoor practice fields; a nutrition area to provide healthy foods and nutritional guidance; a training room and hydrotherapy area for daily treatment and rehabilitation; and a locker room with direct access to both indoor and outdoor practice fields.

There’s “a little pizzazz,” too, Tanner says, including a 15-seat movie theater; displays of the Heisman Trophy and bowl trophies; interactive screens that showcase Gamecock football history and standouts who went on to the NFL; and a two-chair barbershop.

"There are a lot of nice facilities around the country, and certainly, ours will rank among the best,” Tanner says. 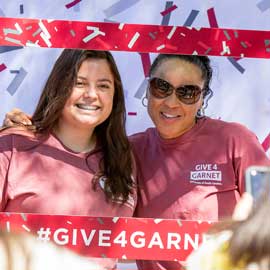 Another successful Give 4 Garnet finished with 6,576 donors making $4,028,875 in gifts during the University of South Carolina's second annual giving day.