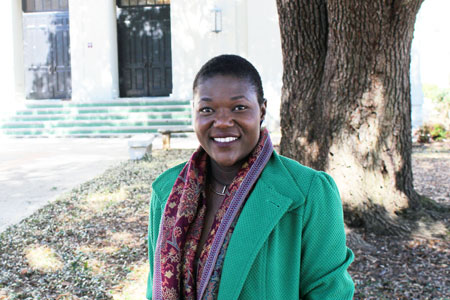 "Hip-hop can adapt to any social environment and has a unique ability to engage young people." — Binda Niati, College of Education researcher

Noella “Binda” Niati  has always been fascinated by the convergence of hip-hop/rap, engagement and social change.

A refugee from the Democratic Republic of Congo, Niati grew up in Nairobi, Iowa and Nebraska. As an undergraduate student, she was intrigued by the historic influence of Malcolm X and how  it affected modern rappers such as Tupac Shakur, who encouraged knowledge seeking about pan-Africanism. Today, as a doctoral candidate in the Educational Foundations and Inquiry program of the College of Education, she’s turned her attention to harnessing the power of hip- hop in transforming education and citizen engagement.

“Within the African and African-American context, music plays and has played a crucial role in various freedom struggles, social movements and political struggle,” she says. “It only makes sense, given hip-hop’s origin story and its international influence, it would be adopted by a young and powerful population.”

Niati first began her research with a Boren Fellowship in Senegal in 2016. “Luckily, I got to know more about the social dynamics of the city and stumbled upon two organizations: M23 and Y’en a Marre,” she says. “Y’en a Marre stood out to me because they were young rappers and journalists who just got fed up one night. After endless days of power outage, they’d had enough and decided to fight against social injustice and inequality in Dakar. They created music videos criticizing the government, went door to door and led protests, held rap battles and ‘learning’ concerts, and used social media to get people involved.”

That small group of young men and women, says Niati, snowballed into an international movement that has spawned similar groups in West and Central Africa. Their preferred weapon of choice? Hip-hop.

“Hip-hop can adapt to any social environment and has a unique ability to engage young people,” explains Niati. “Hip-hop challenges us to reconsider how we learn and how that knowledge is shared and received. It challenges the notions of school and schooling, and lets us break out of the classroom and reconfigure what an engaging, critical and transformative learning space looks like.”

One new avenue for her research is seeing how a group led by a female rapper can gain traction in a male-dominated society. “I’m looking forward to where this research will take me and I’m extremely privileged to have the opportunity to do so under the generous support from the Boren Fellowship, Fulbright Fellowship and the Meeks Scholarship from USC’s College of Education.”