As a gemologist and old-school goldsmith who has made jewelry in Columbia for more than 40 years, Ron Koenig used to look down on “rock hounds” — those folks who like to dig for their own gems.

That is, until a friend suggested a place where they could dig up amethyst and Koenig found several hundred pounds of it.

“I leased land, I joined hunting clubs,” Koenig says of his ensuing quest to find more gemstones in their natural South Carolina habitat.

Now, Koenig is returning some of those finds to the people of South Carolina in the form of a donation of 93 gemstones worth more than $100,000 to the collection of gems at McKissick Museum.

“As someone who owns a jewelry store, he has incredibly high standards,” says Christian Cicimurri, geology professor and curator of collections at McKissick. “The things he has collected are pretty spectacular.”

Cicimurri is also a friend of Koenig’s who has provided him a wintertime outlet for his hobby with volunteer opportunities at McKissick both on its advisory council and as a volunteer cataloguing the museum’s extensive collection of minerals and gemstones. 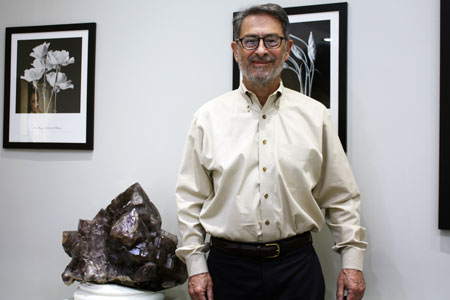 Jewelry store owner and UofSC alumnus Ron Koenig has donated $100,000 worth of gemstones he found in the Carolinas to McKissick Museum.

Before Koenig’s collection, McKissick’s nearly 5,000 gemstones represented faceted — or cut — stones from the J. Harry Howard Collection.  Much of McKissick’s natural history collections are  either very old or representative of minerals found around the world.

Koenig’s collection is entirely uncut and dug from the ground by Koenig himself in North and South Carolina.

The stones are mostly quartz —smoky quartz and amethyst, the purple variety that is prevalent in South Carolina — but also include mica.

Koenig, who grew up in Florence, S.C., was a student at the University of South Carolina when he decided to stop just short of graduation and open a jewelry store with his friend Michael. Within a few months, his friend met a girl and went off to get married, leaving Koenig as the sole proprietor of Michaels Jewelry.

“I learned silversmithing while I was in college and started making jewelry,” Koenig says. “I enjoy the craft of designing. Jewelry design is just in my blood.

“But looking for gems, that is totally different. I wake up at dawn and get out in the woods. I’m poking around looking for a little piece of quartz in the pine straw. Maybe I’ll find a vein or a chimney pipe. Sometimes it’s six inches, sometimes it’s 24 feet.”

Koenig says he has had incredible luck over his 20 years of rock-hounding and he is proud that he can help improve McKissick’s collection. Thanks to modern GPS mapping, he can even pinpoint where he found each piece, which makes his gift valuable for geology research.

“Some people go chase little white balls for relaxation,” he says. “I prefer to go hiking and hey, I might find something worth some money.”