When Bennett Lunn saw the whole culture of his high school shift after changes were implemented during his junior and senior years, he began to realize the importance of education policy.

Lunn says those policy changes at the local level put a lot of stress on staff, and during his senior year, the school lost close to 20 teachers. That sparked an interest in education reform, equity and equal access in public education that has guided his studies at the University of South Carolina and resulted in his being named a 2019 Truman Scholar, one of the most prestigious national scholarships in the United States. The scholarship, named for President Harry S. Truman, is awarded to students who plan careers in public service. 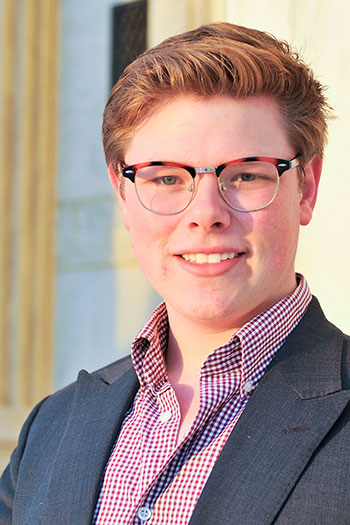 The Truman Scholarship will allow junior Bennett Lunn to pursue a career in public service with a focus on education policy.

“With 91% of Americans enrolled in public schools, public education is a part of our national identity as the ‘great equalizer.’ It’s wrong for some students to be disadvantaged by circumstances outside of their control,” says Lunn, a student in the South Carolina Honors College pursuing a BARSC degree, in which he is able to create his own curriculum focused on jurisprudence and education policy.

Recipients of the Truman Scholarship receive $30,000 toward graduate school and the opportunity to participate in professional development programming to help prepare them for careers in public service leadership.

“The Truman Scholarship will allow me to continue my own education and address the financing hurdle that so many students face,” Lunn says. “I’m thankful for that opportunity, and I hope to be able to give back in a way that allows others to overcome similar obstacles.”

Highly competitive, the Truman Scholarship is awarded to about 60 juniors annually. Lunn, one of 62 recipients in 2019, is the 10th Truman Scholar in South Carolina’s history and the third in four years.

“We are extremely proud of Bennett Lunn for being named our university‘s 10th Truman Scholar. It’s clear he exemplifies the values of this prestigious national fellowship, which include a firm commitment to leadership and service, a stellar academic record and a passion to drive positive change, particularly through the lens of education policy and reform,” said UofSC President Harris Pastides.

A graduate of South Aiken High School, Lunn says he was stunned when he found out he was awarded the scholarship and is grateful for the support he received during the process from his family, the university, the Office of Fellowships and Scholar Programs and the Truman Committee.

“I have incredible gratitude to the many people who have done so much for me in my time at USC,” Lunn says. “And a special thank you to my father, Martin Lunn, who’s nurtured my desire to pursue a career in public service since I was 8, and to my sister, Kelsey, who has provided inspiration and support every step of the way.”

“Bennett’s particular interest is educational reform with a specific focus on equity and equal access. Growing up in a small town in South Carolina and attending public school, Bennett witnessed firsthand inequities in the educational system and very early on came to understand the ways future opportunities expand or retract according to educational preparation. We are thrilled at the news of his selection as a scholar,” says David Simmons, chair of the South Carolina Truman Committee.

Lunn’s advice to other students who have interest in applying for a competitive award is to be strategic but genuine.

“If you’re investing time and energy in things you’re not passionate about, you’re doing yourself a disservice,” he says. “At some point in the competition process, you’re going to be asked a question that catches you off guard, and you need to be able to fall back onto who you are and respond genuinely.”

While at South Carolina, Lunn has followed his own advice to be strategic in how he spends his time and built his resume. He currently is interning in House Majority Whip James E. Clyburn’s office as part of the South Carolina Washington Semester Program. He has worked as an advocate for students through his roles as a resident mentor in the Carolina Men’s Community, and as the secretary of Student Academics, he helped develop new programs to complement the student advising process. Lunn has also served as president and vice president of the Euphradian Society, a historic literary society focused on developing leadership, virtue and oratory. He is a recipient of South Carolina’s Dean’s Scholarship and the Watson Brown Scholarship and the Hadden Scholarship and has received several essay-based scholarships.

Education is one of the most transformative factors in an individual’s life, and I want to work to ensure that every child is receiving as good of an education as possible.

Beyond campus, Lunn has worked with the South Carolina Senate Judiciary Committee, the South Carolina State Grand Jury and the Rule of Law Collaborative, where he has researched and supported various justice sector initiatives. This spring through his involvement with the Rule of Law Collaborative, Lunn played a major role in the development of a one-day conference on issues of justice systems abroad in collaboration with the Bureau of International Narcotics and Law Enforcement Affairs, U.S Department of State.

“I’ve found the greatest thing about the university to be its people. Whether it was my advisers, my professors or my internship supervisors, I’ve had many excellent mentors. There’s such a wealth of knowledge and kindness at this university that can be so incredibly valuable if you seek it out. My experiences with all these people have made me a better person and student, and they’ve given me a focus on what exactly I want to do after I graduate.”

That focus has led to his interest in public education policy reform with a focus on inequity in public schools, a career goal that the Truman Scholarship will help him pursue.

“Education is one of the most transformative factors in an individual’s life, and I want to work to ensure that every child is receiving as good of an education as possible,” he says.

Students seeking national scholarships are assisted by the Office of Fellowships and Scholar Programs. “They’re incredibly supportive and dedicated to the students they work with. They’re with you every step of the way, making sure you’re getting the help you need,” Lunn says. He added that assistance by the Truman Committee was invaluable with application review, practice interviews and insights.