Sportswriter Bill Madden has enjoyed a 50-year career; in May, he finished college 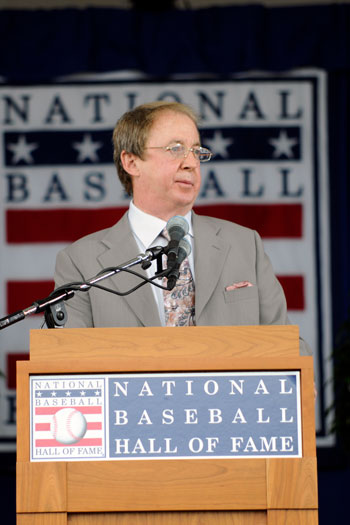 Bill Madden decided after a successful 50-year career as a sportswriter that he wanted to finish the degree he started in the 1960s. (Photo: National Baseball Hall of Fame and Museum / Milo Stewart)

Most sportswriters would kill for a resume like Bill Madden’s.

After nearly a decade at the United Press International wire service, starting in 1970, the Oradell, New Jersey, native spent four decades at the New York Daily News, first as a beat reporter covering the New York Yankees, and then as a twice-weekly baseball columnist.

Between deadlines, he has authored or co-authored half a dozen books on baseball, including two that hit the New York Times bestseller list — one a biography of longtime Yankees owner George Steinbrenner, the other on former ballplayer and coach Don Zimmer. He recently signed a contract for yet another book, this one on Hall of Fame pitcher Tom Seaver.

In 2010, he received the J. G. Taylor Spink Award for contributions to baseball writing from the National Baseball Hall of Fame. In 2015, at age 69, he was laid off by the paper where he made his name. Two years later, they realized their mistake and brought him back.

Madden files stories from his home in Florida now, semi-retired but still covering the game he has covered his entire adult life. Until this spring, though, he was nagged by a bit of unfinished business:

When he left the University of South Carolina in 1970, Bill Madden was still one class short of his bachelor’s in journalism.

“You know, I’ve always felt a little funny about not having a degree,” he explained when Carolinian reached out to him in April. “Even with all of my accomplishments, it still bothers me.”

For Madden, who grew up just 15 miles from Manhattan, the goal was always to be a New York City sports reporter. And if he could cover baseball, his favorite sport, his dad’s favorite sport, even better.

“I was weaned on baseball and newspapers,” he says.

He’s not kidding. His father owned a plumbing supply company in Hackensack and would set out the Mirror and the Daily News for his customers; he had the Herald Tribune delivered to the house. The young Madden read them all — then, in the afternoon, would head downtown for the World Telegram and the Journal American.

“I would buy the World Telegram for the cartoons by a guy named Willard Mullen,” he says. “He was the greatest of all sports cartoonists.”

It was the writers, though, that got their hooks in the young Madden, their bylines as alluring as the box scores.

“My father encouraged me to read the Tribune because it was considered to have one of the greatest sports staffs ever assembled,” he says, then rattles off the Tribune’s beat writers and columnists like they’re the ’27 Yankees. Dad’s favorite, though, was Dick Young, a columnist with the Daily News. “He said, ‘You gotta read Dick Young, he’s the best baseball writer going,’ and I did. Then, lo and behold, I wound up getting hired by Dick Young.”

Just not right away. From his father’s shop in Hackensack to the clubhouse at Yankee Stadium it’s a mere 10 miles, but it took Madden roughly 20 years to get there. He had to learn the trade and pay his dues first, starting at Carolina, where he covered basketball for The Gamecock during the era of legendary coach Frank McGuire.

“I told them, ‘I want to write for the paper but under one condition: I just want to cover the basketball team and write columns on the basketball team,’” Madden explains. “They said, ‘Whatever you want. We just need people to write.’”

Madden’s column, “Sportsbill,” debuted in November 1968, and while the first installment, “To Cheer or Not to Cheer,” was actually about football, he mostly got his wish. He traveled with the basketball team and got on well with Coach McGuire. He then parlayed his student bylines into a full-time reporter’s job at The State, at which point he cut back his course load. On the advice of a hockey beat writer he knew back home, he also sent a letter of inquiry to the sports editor at UPI, Jack Griffin.

I’ve always felt a little funny about not having a degree. Even with all of my accomplishments, it still bothers me.

Eight months later, he got a response — thanks to McGuire.

“I’m working for The State, I’m trying to finish up this last class at USC, and one day [sports editor] Herman Helms comes out of his office and says, ‘Billy, Coach McGuire’s on the phone. He wants to talk to you.’”

At that time, McGuire was sports royalty in Columbia, South Carolina. Madden was dumbfounded. Sure, he knew the popular coach from that stint in student media — “I was one of Frank’s boys,” he says — but he certainly didn’t expect McGuire to ring him up out of the blue. And then McGuire informed him that he’d just talked to Griffin, and that Griffin had a job for him at UPI.

Madden laughs as he recounts the exchange. “I said, ‘Whoa, wait a minute, I don’t understand what happened. Coach, if I’d used you for a reference, I would have told you!’ He said, ‘Well, you should have used me for a reference. Don’t you know that when I was a coach at St. John’s, Jack Griffin was my ball boy?’”

It was as humbling a moment as it was exciting. He called Griffin and introduced himself as “Bill Madden, calling from the University of South Carolina.” After Griffin finished laughing, and finished explaining how many other applicants exactly as under-qualified as him were gunning for the exact same job, he set Madden straight about the ways of the world.

“He says, ‘I’m going through these letters, and I see yours, from the University of South Carolina. I looked it over and I said, “Hmm. There’s only one man on Earth who’s going to decide if you get this job or not, and that’s Frank McGuire.” So, I called Frank and he says I should hire you, so I’m hiring you.’

“No resume. No clips. No nothing,” says Madden. “Just the letter and a phone call from Frank McGuire. That’s how I got started in this business.” 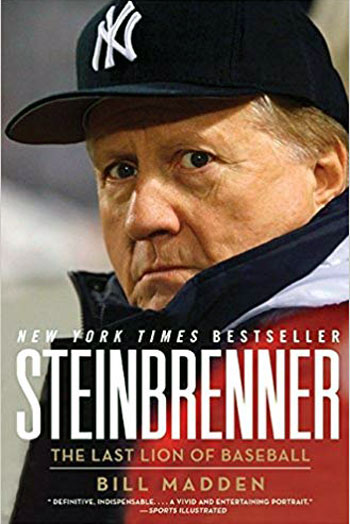 The job at UPI was what Madden had been dreaming about since he was a kid, flipping through the sports pages at the kitchen table, at his father’s shop. He’d be in New York, the center of the publishing universe, writing about sports, possibly even baseball. There was just one catch.

If he wanted the job, he had to start right away. You didn’t keep Jack Griffin waiting. Frank McGuire had told him as much over the phone.

“That’s the thing,” says Madden. “They said September 1, and this was already August. So, I packed my bags, got on a plane and left everything else behind. I thought, ‘What do I need these credits for? I need them to get a job. Well, I’ve got one.’”

It was without question, the right call. During his time at UPI, Madden made contacts at The Daily News, which was located in the same 42nd Street skyscraper. Nine years on, he was approached by Dick Young — his father’s favorite sportswriter, “the best baseball writer going” — and offered the paper’s coveted Yankee beat. Nine years after that, he got his own column, “Bill Madden on Baseball,” and he never looked back — until a high school reunion in 2018 got him thinking again about that unfinished business.

He got to talking with an old high school friend who had also come down to Carolina on a track scholarship, Jim Wenthe. Jim’s wife, Lee Wenthe, used to teach in the School of Journalism and Mass Communications. Could they help figure out who to talk to about resuming his studies? Was there any way at all that he could finally finish what he started way back in 1963?

“A few weeks later I got a call from [College of Information and Communications dean] Tom Reichert,” Madden says. “He said, ‘We need to do something about this.’”

As it turned out, there was no expiration date on Madden’s undergraduate credits. Everything had to check out with the Office of the Registrar, obviously, but there was no reason a veteran journalist with a lifetime’s worth of real-world experience had to return to the classroom after so many years. Instead, he and Reichert worked out an idea for an independent study that was both rigorous and appropriate, and that might even benefit future students.

For starters, he wrote a 6,000-word paper called “Where Have You Gone, Walter Cronkite: The Demise of Honest Journalism in America.”

“It’s about objectivity in journalism, how that’s changed over the course of his career,” says Reichert. “That’s a very interesting and insightful read.”

Madden was also asked to write a second, less formal paper, which might provide some professional insights for students in the college’s new sports media concentration, many of whom dream of a similar career. Dean Reichert also hopes to bring Madden to campus in the fall to share his professional wisdom in person.

“His story is amazing,” says Reichert. “He gets this job at UPI, ends up covering the New York Yankees, and that leads to all these books. It’s been a great career, but he just wished he’d gotten that degree so he could say, ‘Yeah, actually, I am a graduate — of the journalism program at USC.’ ”