What’s got your attention?

A study on attention patterns of soldiers has implications for PTSD 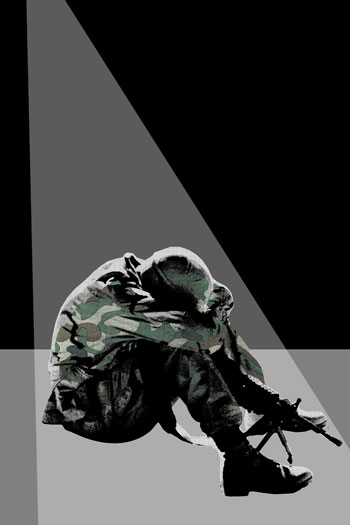 A professor in the Darla Moore School of Business, Bliese is part of an international research team conducting a five-year study of 600 soldiers to determine if they exhibit signs of threat-related attention bias that might point to risk factors for developing post-traumatic stress disorder (PTSD) and other behavioral health problems.

“Part of this research will be a diagnostic tool. If we don’t know anything about a soldier coming in, can we identify traits and cognitive patterns early on that might put that person more at risk for developing PTSD down the road following combat exposure?” says Bliese, a retired U.S. Army colonel whose work while on active duty involved similar psychological research.

“Another aspect of this research is looking into whether we can actually modify maladaptive patterns of threat-related attention that would limit the risk for developing PTSD.”

Bliese, whose expertise is in the analyses of complex longitudinal data, is collaborating with Yair Bar-Haim, a professor of psychology and neuroscience at Tel Aviv University. In the study, the researchers will track 600 Israeli Defense Force soldiers from the beginning of their three years of military service through their first year post-discharge.

Each soldier will periodically participate in a simple computerized test that flashes images on a screen, prompting the participant to decide in a fraction of a second whether the image is threatening or nonthreatening. Sophisticated computer techniques allow the researchers to parse the participants’ response patterns.

Previous research has demonstrated that individuals with anxiety-related disorders typically display abnormal attentional patterns. It’s also been shown that those who exhibit maladaptive patterns of attention are more prone to PTSD symptoms after they’ve been deployed in war zones or experienced combat conditions.

In a broader context, though, Bliese is interested in factors that cause symptoms of stress in work environments. “Understanding combat exposure is a unique and critical area of research for the military and veterans, but when we look at data for those with high combat exposure and those working under poor or abusive leaders, we see some similarities in levels of stress symptoms,” he says. “In terms of people’s reactions, almost nothing is more stressful than being in combat, so it gives a sense for how more common workplace factors like abusive leadership impact employees.”

The data for those with high combat exposure and those working under abusive leaders are roughly equivalent, according to Bliese.

“In terms of people’s reactions, you’d think nothing would be worse than being under combat, but those under abusive leadership respond to the stress in similar ways to combat veterans,” he says. “That perspective is important when we, as a business school, talk about developing future leaders. What you do, the way you lead, can have profound effects on the levels of stress in your staff.”