Before Neil Armstrong placed his foot on the moon and made "one small step for man, one giant leap for mankind" on July 20, 1969, he and fellow astronaut Buzz Aldrin had to know where to safely land their spacecraft. 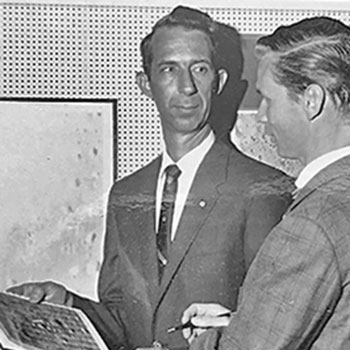 Charles Shull, a 1957 University of South Carolina graduate, led a team in the 1960s and '70s that created maps of the moon’s surface.

Thanks to years of behind-the-scenes mission planning, they had a map. Charles Shull, a 1957 University of South Carolina graduate, led a team in the 1960s and '70s that created maps of the moon’s surface to ensure that human crews could safely land and depart.

After the Apollo missions were completed, Shull’s department was disbanded, and maps and other materials were being discarded. He rescued some of his work, put it in his car and took it home. After storing it for decades, Shull, who’s now in his 90s, recently donated the rescued material to University Libraries' Irvin Department of Rare Books and Special Collections.

“No one had systematically mapped the moon before,” says Michael Weisenburg, reference and instruction librarian. “There were pictures of the moon, but there’s not an actual cartographic study of it as a sphere.

Possible landing sites for Apollo 11 were under study for more than two years, according to NASA. Thirty sites were considered, but the list was shortened to three based on high-resolution photographs taken by a lunar orbiter and close-up photographs and surface data provided by the Surveyor spacecraft, which landed on the moon.

“How do you figure out how to map something you can’t go to? The unmanned orbiters photographed strips of the moon. Then Shull’s team composited them in order to make a map,” Weisenburg says. “We have examples of these photographs in the collection. Some of the orbital photographs show handwritten calculations where they’re doing math because the photos have distortion that had to be compensated for.” 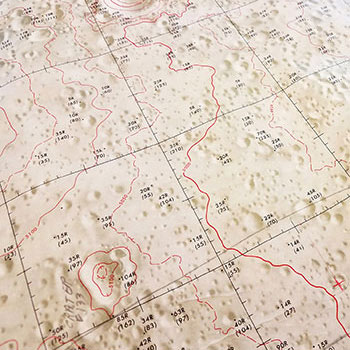 This section from a map used for planning the Apollo 11 landing shows topographical features of the moon.

Much of Shull’s work was on the later Apollo missions — the last of which was Apollo 17 in 1972 — but there are also materials that were used for the Apollo 11 mission that first landed men on the moon 50 years ago.

The collection of about 35 maps and some photographs includes a three-dimensional model Shull used in presentations to members of Congress and military officials to explain the importance of his team’s work on mapping the moon’s surface in order to land astronauts safely. The model illustrates an approximate site for the Apollo 17 landing, including the labels cartographers gave to geological features in the target area, which seem to have a literary influence. There’s Camelot, Sherlock, Faust and Tortilla Flat (possibly a reference to Steinbeck). A notation on the map says that “names shown are for mission planning purposes only and are not to be considered formal designations.”

Weisenburg sees Shull’s collection as a useful complement to two other collections held by University Libraries: the Robert B. Ariail Collection of Historical Astronomy and the Charles F. Bolden Jr. Collection. The Ariail collection includes several thousand volumes that represent most of the major high points in astronomy going back to the 15th century. Bolden’s personal archive documents his career, military service and time at NASA where he traveled into orbit four times aboard the space shuttle and later became the first African American to lead the agency.

Shull’s collection of lunar maps will be available for research after items have been processed and cataloged.

“It provides a snapshot of the labor it took to map the moon, so that informed decisions could be made about where to land each mission for safety and success and to optimize the opportunities for scientific inquiry,” Weisenburg says. “This could be a valuable teaching collection because I can show how they figured out what the moon looks like, the paper they wrote to explain the science and math used to create the maps, the actual images they used and the finished map.”