In the 65 years since its premiere, South Carolina-born composer Carlisle Floyd’s Susannah stands as one of the most beloved American operas. Floyd, dubbed “a master of creating mood in the orchestra” by The Los Angeles Times, is a South Carolina Hall of Fame inductee, 2004 National Medal of Arts awardee and recipient of the 2008 National Endowment for the Arts Opera Honoree for lifetime work. 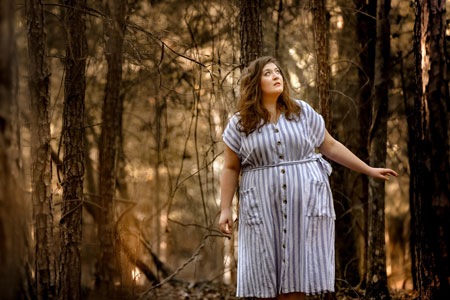 Under the direction of Ellen Douglas Schlaefer, the School of Music presents Floyd’s Susannah at the university’s Drayton Hall Theatre Nov. 1-3.

Opera alumnus Daniel Gainey returns to the university to perform the role of Little Bat McClean, a troubled boy and admirer of title character Susannah.

“It is an honor for me to return to South Carolina professionally to help bring Mr. Floyd's music to life in Schlaefer's production,” Gainey says.

Schlaefer, director of opera studies at the University of South Carolina, gives graduate and undergraduate students the opportunity to learn from a comprehensive program covering every facet of opera production, both on stage and behind the scenes.

“Ellen's commitment to creating a working theater company for her students, by her students, instilled a great sense of ownership for my opportunities,” Gainey says. “I create my chances as an artist instead of waiting for someone to offer me one.”

Gainey came to UofSC on a full scholarship and he credits that opportunity for opening doors he never expected. Since he graduated in 2007, he has performed as a singer and instrumentalist and directed shows. Gainey is the pastoral musician for St. Mary’s Episcopal Church in Asheville, North Carolina. He credits his success in part to opera at South Carolina.

“While I was at USC, I was amazed at how many resources and connections I made,” Gainey says. “I was in a leading role by my sophomore year. I was getting one-on-one time with coaches, professors and audiences. It was an amazing experience.”

The music of Susannah is characterized by Appalachian folk melodies and includes some Protestant hymns and traditional classical music. A prominent part of the opera is Susannah’s soaring aria in Act II, "The Trees on the Mountain," similar to Appalachian folk tunes, but is Floyd's own composition.

The libretto, also written by the composer, has as its basis the apocryphal story of Susannah and the Elders, updated to the recent past and relocated to a fictional rural community. The drama centers on the unjust ostracizing and abuse of Susannah by her community and the powerful leaders who are simultaneously repulsed and captivated by her beauty.

“The opera explores themes of hypocrisy, fear and the malleability of crowds, all of which are extremely relevant to our society today,” says Melissa Starkweather, a second-year master’s student in opera theater and one of two students performing the title role. “It is an exciting thing to be a part of a show which carries such a powerful message. Both the story and the music are absolutely gripping and will leave audiences with a new perspective on the power of fear.”

I hope this work can inspire the next generation of South Carolina operatic talent.

“Discovering the slow, harrowing transformation and internal struggle that Susannah experiences has been a challenge, but it has also been captivating,” Howland says. “I have loved the opportunity to grow as a performer through this wonderful opera. Susannah warns us of the power of a community to do evil but encourages us to consider how we can instead do good in our own community.”

“People are ostracized and isolated every day, both for things they have done and things they haven’t,” says T.J. Turner, a master's in voice performance student who plays Sam, Susannah’s brother. “This show emphasizes the destruction and emotional turmoil it can cause for not only those who are accused, but also those who are doing the accusing, despite the reason. I think we can all identify with Susannah, but it’s important to take a step back and learn from what the other characters are doing to her and her brother, Sam, throughout this masterpiece.”

Despite its serious topic, Susannah was received well and hailed as an instant classic at its world premiere in Tallahassee, Florida, and later at the New York City Opera in 1956. The appeal of the opera has endured for more than six decades, a rare feat in operas composed in the 20th century. It attests to the composer’s uncommon ability to wed tuneful music with astute dramatic insights to create an opera of complex characters, emotional immediacy and thrilling narrative pace.

“South Carolina has given generously of its talents to the operatic world,” Gainey says. “Carlisle Floyd and Ellen Schlaefer are two such gifts. I hope this work can inspire the next generation of South Carolina operatic talent."

The opera, sung in English, will be performed at Drayton Hall Theatre, 1214 College St., at 7:30 p.m. Nov. 1 and 2 and at 3 p.m. Nov. 3. Tickets are $25 for adults; $20 for seniors, UofSC faculty and staff and military; $10 for students with ID. Tickets are available online through the USC Marketplace or at the door. Please note that online and phone sales end at 3 p.m. on opening day. After that you may purchase at the door one hour before showtime.