In October, crime novelist James Ellroy visited the University of South Carolina for the 2019 Fall Literary Festival, sponsored by University Libraries and the English department. It wasn’t Ellroy’s first time in Columbia, though, and it wasn’t a quick turnaround.

The author of such blockbuster novels as L.A. Confidential and The Black Dahlia, and the bestselling memoir My Dark Places, committed his papers to the Ernest F. Hollings Special Collections Library in 1999 and has been to town several times since. This year, he spent more than a week on campus visiting fiction workshops, a creative nonfiction workshop and a South Carolina Honors College class, where he fielded questions about writing, creativity and his latest novel, This Storm.

On his last day on campus, Ellroy also sat down with junior English and theater major Susan Swavely for an interview at the School of Journalism and Mass Communications’ Kennedy Greenhouse Studio. The interview was arranged by the Office of Communications and Public Affairs in cooperation with University Libraries and the English department.

“First of all, I love that he came to our classes because we got to pick his brain and meet a very successful writer, someone who’s doing what I want to do and what most of the people in class with me want to do,” says Swavely, who is in two of the classes Ellroy visited. “And then I just felt completely honored that I got to sit down and talk to him one-on-one for an extended period of time. It was pretty awesome.”

I know you call all of your novels masterpieces that precede the masterpieces you have yet to write. Is there one that sticks out as your ultimate masterpiece? 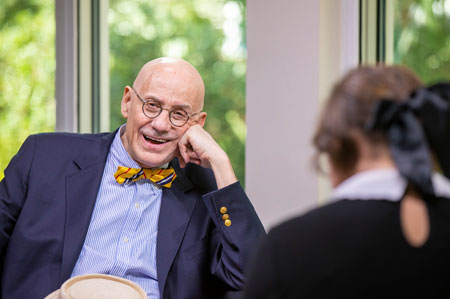 Crime novelist James Ellroy sat down with junior English and theater major Susan Swavely for an interview on a recent visit to campus.

Well, the books that I love the most, that I think are the most accomplished, the deepest in their humanity, the most stylistically accomplished, the broadest, that show the greatest diversity of character and motive are the two new books, Perfidia and This Storm. They are the first two novels in my second "L.A. Quartet."

What gives them that humanity?

The inclusion of women as point-of-view characters. Kay Lake in Perfidia and This Storm. Joan Conville in This Storm. The tortured, brilliant closeted homosexual, Japanese-American forensic chemist Hideo Ashida in these two books. The inclusion of a real-life character, William H. Parker, the greatest American policeman of the 20th century, who has a bad rap historically. He made some intemperate racial comments after the first Watts Riot, 1965, and here I grant him the humanity that I think he deserves.

You write about some pretty tough things. I asked about this in class, but I’ll ask it again. How do you manage writing such dark material without it affecting your personal life?

I’m a professional. This is what I do for a living. It’s also my great passion. So, great injustices, like the Japanese internment, like World War II itself, like the Spanish Civil War — they make me happy. I’m happy to write about them. I didn’t create them. I wasn’t over there bombing Bilboa and Guernica and imprisoning innocent Japanese-Americans back in 1942. It happened. And now I’m happy because I can exploit it — and I don’t think exploit is too strong a word — for my books.

What, to you, are the components of a good story?

What do you mean?

The human stories at the heart of history. The obscure people rubbing shoulders, and frankly, other body parts, with the celebrated of history. Dudley Smith, my fictional Irish cop — his fictional love affair with the screen legend Bette Davis in Perfidia. The kind of early-wartime egalitarianism. The merging of the classes in the common cause of winning World War II — that’s big stuff right there. Big themes. Big drama.

All of your stories need those big themes?

Well, the books that I love the most, that I think are the most accomplished, the deepest in their humanity, the most stylistically accomplished, the broadest, that show the greatest diversity of character and motive are the two new books, Perfidia and This Storm.

When you first started writing did you think, “Of course I’m going to make it”?

I was very confident. But I didn’t know what would happen. I didn’t know who would publish me. I didn’t know what kind of readership I would be able to establish around the world. And so, to be here — and frankly, at 71, the latter stage of my life — I’m having a blast. And I’m very, very grateful. Grateful for [University Libraries dean] Tom McNally and [publisher] Rick Layman and all the people here at USC for putting me in the library, where I have been told — Tom McNally told me — there are over a million pages of my manuscripts. And that’s a lot, because I write by hand.

What have you found out about yourself writing these novels — over the entire course of your career, which is a fairly long one?

I’ve been doing this 40 years. I’ve changed in that I’ve grown somewhat. I have surmounted things like stylistic excess in the name of a greater portrayal of human beings and all of their crazy, magnificent, multifaceted dilemmas. And I have written bigger and bigger books, and, I think, deeper and deeper books, and I think more stylistically evolved books. And the emotional content of my books has become enhanced with these last two books, Perfidia and This Storm. If Perfidia and This Storm do not rip your heart out — and Blood’s A Rover, the concluding book of the Underworld USA Trilogy — if they don’t rip your heart out, then you have no heart.

You spoke in my class about how being a novelist can isolate you — from family, from loved ones. In your own experience, how have you felt isolated as a novelist?

I’m a solitary person. I’m very, very happy that I never had kids. Because I would have been a [bad] father. The kind of dad who comes around at Christmas time and pats the kids on their heads, hands them a couple of presents and then goes back to work. That’s me. That’s me.

So you prefer being by yourself?

Yeah, by and large. I mean, I have a girlfriend [Helen Knode]. She’s my second ex-wife. We don’t live together. We didn’t get remarried. We live down the hall from each other. Monogamy, that doesn’t bother me so much. Cohabitation? No. Helen’s in 200. I’m in 208.

You prefer that arrangement?

It’s something that I couldn’t have conceived of before it actually happened. Helen was the one who suggested it. And I’m not a family guy. 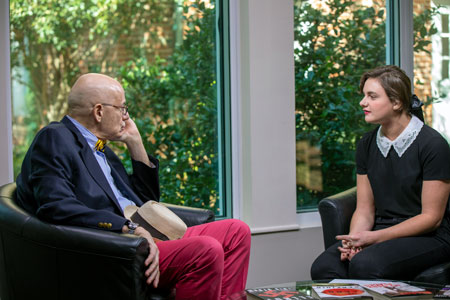 "I just felt completely honored that I got to sit down and talk to him one-on-one for an extended period of time. It was pretty awesome.” — junior English and theater major Susan Swavely

If you look through the books, you’ll notice that there is not … much … family … drama. I don’t like that stupid s**t in crime TV shows, motion pictures or in crime novels. I don’t like the whole idea of crime as the deus ex machina of a human being’s life, the thing that explicates everything about an individual. You’ve got a lot of disenfranchised people who are off on their own in the world. And that’s me.

How many hours a day do you write?

Eight. Six, seven, eight. Something like that. Five. Four. [Laughter] Three, two, one — blast off! Hiroshima! Nagasaki! Yeah! Yeah! But you know, when I’m ending up a book, or when I’m going over typed pages, I can go 12 to 14 hours a day.

I have a two-bedroom pad in a nice building. Downtown Denver. And it’s done up midcentury modern. Very, very stylish pad. The walls of the living room are indigo blue. I have no white walls because I hate white walls. A lot of different shades of gray. Everything is perfectly neat. Squared up. Neat stacks of paper. I am fastidiously neat. There’s no disarray. There’s not a crumb on the floor. I eat over the sink so I don’t make a mess. [Feigns devouring a sandwich.]

Does that help you write? The neatness?

Has there ever been a moment as a writer when you thought you might give up?

You wanna know my ethos? I love to fight, I hate to lose, I don’t care if I get hurt, and I never give up.

When did you feel that you had made it?

I’ve never felt like I’ve made it. I continue to feel like I have to get better and better and better. I never rest on my laurels. The great moment was going to Alfred A. Knopf for a three-book deal and knowing that they would publish my next three novels, which turned out to be White Jazz, American Tabloid and The Cold Six Thousand.  Those came out with Alfred A. Knopf, who publishes the most beautiful books in the world, the most beautifully designed. But I’ve never felt like I had it made. I’ve always felt like I had to prove myself one more time, one more time, one more time.

Who are you proving yourself to?

God. I am glorifying God and this astonishing gift that He has given me and given to the world.