In 1790, U.S. marshals and their deputies fanned out into the 13 states, along with districts and territories, to find out how many people lived in the fledgling republic.

When all of the numbers were reported — with South Carolina being the final state to turn in its results, five months after the set deadline — more than 3.9 million Americans were counted. The first federal census of the United States was signed by Secretary of State Thomas Jefferson on Sept. 19, 1791.

A certified copy of that original document, with Jefferson’s signature on the back page, is now part of the collection at the University of South Carolina Libraries. The 1790 census came to the library as a gift from a donor, a UofSC alumnus who prefers to remain anonymous. Libraries Dean Tom McNally said he was presented with the document by a granddaughter of the donor during her recent visit to campus.

“It was quite thrilling to open it. There were only 200 copies (in the first printing) and we don’t know how many Jefferson signed. You open up a little box, and inside it’s nothing more than a little pamphlet, and it’s the first census of the United States. You flip it over and there’s Thomas Jefferson’s signature,” McNally says. “It’s wonderful to have donors who really cherish these kinds of things and buy them and bring them to us because they know it should be in our library.”

The copy descended in the family of Gideon Granger, the postmaster general during the Jefferson administration, and now is housed in the Irvin Department of Rare Books and Special Collections in the Hollings Library, says Elizabeth Sudduth, associate dean for special collections.

“The 1790 census is an important primary resource from the early republic,” Sudduth says.  “Mandated by the Constitution, the census would ensure fairness in representation, taxation and federal funding.  The Irvin Department copy has interesting handwritten calculations that relate to how important this information was.”

It’s wonderful to have donors who really cherish these kinds of things and buy them and bring them to us because they know it should be in our library.

Both President George Washington and Jefferson were skeptical of the results of the final count, believing the 3.9 million number underestimated the country’s residents. According to the U.S. Census Bureau’s history, Washington believed the original results were low because “Some people failed to complete the census for religious reasons, fears of being taxed, a general mistrust of the federal government or because lazy deputies failed to count entire households.”

The person responsible for South Carolina’s count was Isaac Huger, who was made a U.S. marshal by Washington in September 1789. He was one of 16 U.S. marshals and approximately 650 deputies who worked to complete the first census. But Huger’s job was not easy; he struggled to find deputies willing to travel around South Carolina, with some concerned about physical and financial challenges. Many of the state’s residents refused to cooperate with the census workers because they were worried the federal government would use the information to impose taxes on them. In 1791, a federal grand jury even indicted six citizens and one enumerator in South Carolina for not following the 1790 Census Act. 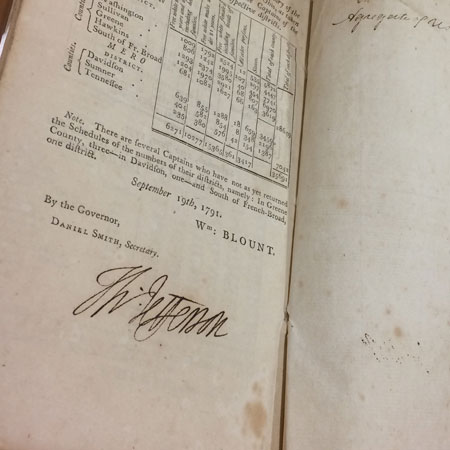 The 1790 federal census, signed by Secretary of State Thomas Jefferson, is now part of the collection at University Libraries.

Huger finally finished the state’s census and delivered it to Jefferson in February 1792, several months after the deadline. Because South Carolina’s results weren’t ready when the results were being compiled, a page was left blank in the census pamphlet, and the delayed results were printed on a separate leaf and glued into the original booklets before they were distributed.

In South Carolina, the populations are broken up by districts, counties and parishes. Richland, for example, had about 4,000 people, with 596 free white males over 16, and 1,437 enslaved people.

Forms for the 2020 census have been arriving in mailboxes around the country in recent weeks, with residents being asked to complete the forms online or by mail.

“The census has changed multiple times, with different things asked at different times,” says Bill Sudduth, head of government information and maps at UofSC’s Thomas Cooper Library. “In the late 19th century, the census asked whether you went to church or not. It’s asked things like the number of insane people and where they dwelled. In 2010, they cut everything back. There used to be a short and long form; now everybody answers the short form.”

But, even after 230 years, the census remains an important tool for the government and responsibility of citizens, since census information is used to decide everything from how much federal money is allocated for specific areas of the country to the number of representatives each state has in Congress, he says. It also affects districting in state legislatures.

Elizabeth Sudduth says the library had originally planned to exhibit the 1790 census this week, since Census Day is April 1, but that isn’t possible now that the university is closed because of the coronavirus pandemic. She says a digital copy will be eventually be made available.

She also said the document, with annotations and numbers penciled in the margins over ensuing decades, could be useful to scholars piecing together American history and population trends.

McNally says UofSC is proud to be one of the few libraries in the country with a copy of the first census.

“In truth, it’s so amazing as a display item,” McNally says. “Certainly a researcher would love to use it. But from the standpoint of a young student coming into the library: Wow! That was the first census of our country and it’s signed by Thomas Jefferson. That’s pretty cool.”