The celebrated poet and University of South Carolina professor had an email from the president of the American Academy of Arts and Sciences, a prestigious fellowship of artists, scholars and leaders who work together for the public good. Finney read that she been nominated and elected to membership in the AAAS. Founded in 1780, the academy counts Benjamin Franklin, Ralph Waldo Emerson,  Martin Luther King Jr. —  and now, Finney — among its members. 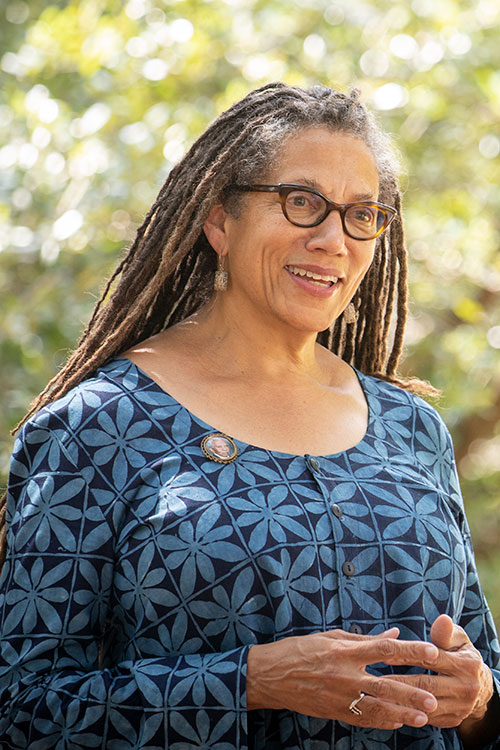 Celebrated poet and University of South Carolina professor Nikky Finney was elected to the American Academy of Arts and Sciences, a prestigious fellowship of artists, scholars and leaders who work together for the public good.

Finney is already the author of several books of poetry and a recipient of the National Book Award. She hopes this latest honor gives her more opportunities to collaborate with others and work for social justice.

“Becoming a member of the academy doesn't alter my words or my work," she says. “Being a member perhaps adds a new, robust and international dimension which I hope to inhabit with the same outspoken candor that being a poet of any geography requires.”

Candor. That is a central part of Finney’s poetry, just as much as nouns, verbs and meter. Her words light fires under feet to advance causes close to her heart.

For example, consider one of her latest projects. She teamed up with the composer Michael Abels to create “At War With Ourselves ― 400 Years of You,” an oratorio about race relations, social justice and civil rights. The project was a dream come true for Finney, “not just as a poet, but also as a citizen of this country who wants that country to not be complacent but to fight harder to be better than it is,” she says.

She wrote the lyrics for the piece in 2019, the 400th anniversary of the arrival of the first Africans in North America. The text touches on a wide span of history, from 17th-century slave ships to modern Olympians.

“I wanted to write something intimate and emotionally charged,” Finney says. “Something historical. Something beautiful. Evocative. Something heart-wrenching and maybe even sublime.

“I think a poet should use her labor to write about the undeniable beauty in the world," Finney says. "It’s also her responsibility to write books that inform a society — hawking polite but imprecise history — of the many injustices and broken promises that have failed to obfuscate the genius and resilience of marginalized people.”

The California-based Kronos Quartet was set to bring the oratorio to life along with singers from the San Francisco Girls Chorus and the University of South Carolina. Unfortunately, the COVID-19 pandemic canceled the debut performances this spring and summer, but Finney says the collaborators are still determined.

“We hope to be back next year,” she says.

Professor Finney is a gifted, hard-working, ever-aspiring writer whose work is both probing and challenging and yet a powerful testimony to the depth of human resilience.

Lacy Ford, dean of the College of Arts and Sciences

One reason Finney embraces candor is that other people’s honesty helped make her the writer she is today.

“I would like to thank the relentless teachers and librarians scattered throughout my life — those adults who were not trying to be my friend when I was their student," she says. “They wanted me to succeed more than they wanted me to like them."

She says she’s also grateful for Mary Anne Fitzpatrick, former dean of the College of Arts and Sciences, and Valinda Littlefield, former director of the university’s 50-year-old African American Studies program, who were instrumental in bringing Finney back to South Carolina, her home state, where she holds the John H. Bennett Jr. Endowed Chair in Creative Writing and Southern Letters.

Her colleagues are thrilled about the news of the new honor. Lacy Ford, dean of the College of Arts and Sciences, called it a well-deserved honor.

“Professor Finney is a gifted, hard-working, ever-aspiring writer whose work is both probing and challenging and yet a powerful testimony to the depth of human resilience," Ford says. “To know Nikky Finney is to know an inspiring teacher and a person who loves what they do no matter how demanding it can be.”