The Roaring '20s — America and UofSC a century ago

Homecoming theme invites a look back to the Jazz Age

It’s often referred to as the Roaring ‘20s — the third decade of the 20th century that’s generally associated with prosperity, Prohibition, jazz music and flappers. 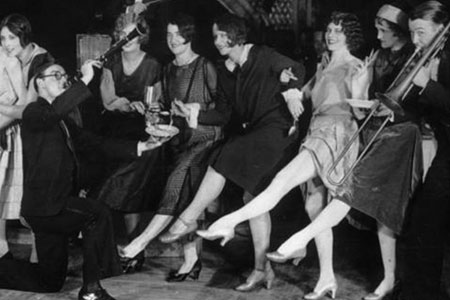 The popular image of the 1920s is one of carefree excess, but there was a grittier side to the decade. At the University of South Carolina, enrollment boomed and campus infrastructure improved.

The Roaring '20s is also the theme of this year’s virtual Homecoming at the University of South Carolina, which takes place Oct. 16-18. In the spirit of that celebration, here’s a look back at what life was like in America and at the university a century ago.

World War I had ended and many Americans were buying cars and appliances on credit. Young women were bobbing their hair and dancing the Charleston, and nearly everyone was ignoring Prohibition. But there was a lot more going on, says Stephanie Riley, a Ph.D. candidate in American history at the university.

“This was an era that a lot of people think of as the Jazz Age and that it was very prosperous and that was the case for certain people,” Riley says, “but it was also a time of devastation and conflict for other people.

“The upper class saw income growth, but the lower classes saw stagnant wages — the top 1 percent was greater than the 42 percent of the bottom half of society, and about 66 percent lived below the level necessary to maintain a standard quality of living.”

Anti-immigration sentiment was growing and the Ku Klux Klan was reviving, even as hundreds of thousands of African Americans migrated away from the South in search of a better life.

A measure of prosperity made its way to South Carolina, but a significant chunk of the state’s economy was tied to agriculture, and cotton prices had fallen precipitously after World War I ended.

Enrollment at the University of South Carolina more than doubled, from 621 students in 1921 to more than 1,400 in 1925, and by the end of the decade women made up about 25 percent of the student body. The university added more faculty members and created new academic programs in music, art, electrical engineering, pharmacy and journalism.

To accommodate the growing number of female students, the first dorm for women was built in 1924. Named Wade Hampton in 1940, the dorm was rebuilt decades later as part of the women’s quad. Central heating was added to Harper and Elliott on the Horseshoe, and a fourth floor was added to what is now Barnwell (originally named LeConte) on Gibbes Green.

The Melton Observatory was built in 1928 with a gift of $15,000 from Edwin S. Seibels, an 1885 graduate. It was named in memory of university President William Davis Melton who died in office unexpectedly in 1926.

For all of the construction and improvements on campus, basic technology was lagging. As late as 1927 the entire campus had fewer than half a dozen telephones. Still, a bit of modernity made its way to the university in the form of music. The 1929 Garnet & Black yearbook mentions three jazz orchestras at the university.

It wasn’t just the music of the ‘20s that made its way to this campus. F. Scott Fitzgerald and Ernest Hemingway came to prominence during that decade, and the University of South Carolina later acquired some of the world’s best collections of materials from each writer.