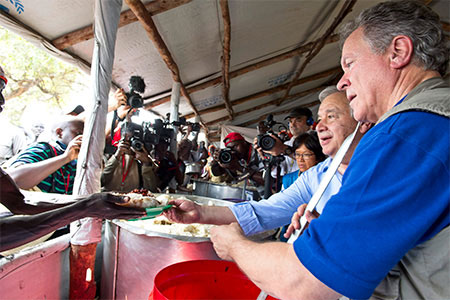 An international food program run by University of South Carolina alumnus David Beasley won the Nobel Peace Prize for its efforts to combat hunger around the world, especially during the pandemic that has forced millions more people into poverty.

"We are deeply humbled to receive the Nobel Peace Prize," Beasley wrote on Twitter. "This is an incredible recognition of the dedication of the World Food Program family, working to end hunger everyday in 80-plus countries."

William C. Hubbard, dean of the School of Law, praised Beasley's impact on the world stage.

"David’s leadership on the front lines of food insecurity and in the midst of threats of mass starvation has saved millions of lives across the globe,” Hubbard said. “Those of us who have known David for decades are so pleased that his leadership has been recognized in such a powerful way."