During the pandemic lull this spring, the sophomore finance student concocted a new recipe: this time, for a company that will pair families struggling with food insecurity with restaurants struggling to stay in business.

The online platform aims to accelerate the expansion of “pay what you can” restaurants where customers order quality food online at price points they can afford.

Shipley entered his idea in UofSC’s COVID-19 challenge, which was sponsored by the McNair Institute for Entrepreneurship and Free Enterprise and other partners. The institute has been creating new opportunities for UofSC’s student innovators since it launched in 2016 with a generous gift from the late Bob McNair ’58, a leading businessman and sportsman.

As a challenge winner, Shipley received $1,000 in seed money. He turned to the experts at McNair for help plotting the next steps to get his business running.

Based on their input, he is registering his company as an LLC and building his web platform. Shipley aims to recruit restaurant partners and start testing the website over winter break.

“I’ve always liked the idea of innovation, that the only way we move forward and make the world a better place is if we have people willing to take the path less traveled and try something new,” he says.

Entrepreneurship has long been a part of Yaw Addei-Boadu’s DNA, too. 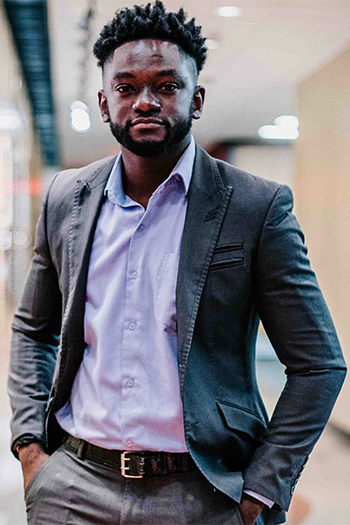 Yaw Addei-Boadu came to South Carolina to gain the knowledge and skills to turn his innovative ideas into reality.

In his native Ghana, he helped to start an events rental company, a fashion business and a non-profit organization. He also helped to design a biogas stove that turns waste into energy for cooking with less pollution than burning charcoal or wood.

“I am always pushing myself to go a step further,” he says. “Sometimes it might look like a failure. I may not get to where I wanted to go with that project or venture, but the experience has given me another block to step on to see things from a different perspective and not to repeat what I’ve done.”

At South Carolina, he is applying the lessons he learned in an innovation and new venture elective course to form a marketing company that provides services to startups and a company that sells fashion-forward wearable devices that contact police in an emergency with a simple tug.

Addei-Boadu was inspired to move forward with his ideas after helping to recruit billionaire Steve Forbes to speak at the university’s Entrepreneurship Showcase in January and meeting him at the event.

Now it’s Addei-Boadu’s turn to share his entrepreneurship journey during the next showcase Nov. 20.

Boccanfuso returned to the Midlands to grow her business with support from the UofSC Columbia Technology Incubator. After completing the Techstars Accelerator in Austin, Texas, and making an appearance on NBC’s “Shark Tank,” her team is now expanding ABii’s distribution, with robots in schools and homes across 23 states.

TerraStride integrates mapping and weather data into a smartphone app for hunters.

“Students who are looking to take the plunge with their startup idea should develop a feasible plan to raise pre-seed funding and market test their idea,” Boccanfuso advises. “Be enterprising and look to any resources you have available to make that happen.”

South Carolina’s fastest-growing tech startup — according to Inc. magazine — sprang from a business plan competition idea to integrate mapping and weather data into a smartphone app for hunters.

Peddling enthusiasm and a primitive slideshow deck, Lanford Holloway, ’13 MBA, in 2011 recruited Ph.D. students from the College of Engineering and Computing to bring his vision to life. Within one year, the TerraStride team launched the first iteration of the HuntStand app, now downloaded more than 6 million times.

“Being an entrepreneur is extremely fulfilling and exciting but also can be very stressful,” Holloway says. “It's cliche to say, but focus is extremely important. You have very limited time and resources, so knowing where to allocate those can be a key to success.”

Brynley Farr, ’07 graphic design, never planned to start her own company as a University of South Carolina student.

But then she accepted a freelance job to design a book cover and typeset the text, which led to another project and then another.

By 2012, her side hustle became a full-time gig, and she recruited her husband Chris ’07 (B.S., mechanical engineering) to join her. Together, they built ByFarr into Columbia’s go-to boutique firm for custom letterpress printing as well as full-service branding, design and marketing services.

“The greatest joy of ByFarr is our team,” Farr says. “We are able to create and do incredible things with the power of many minds and hands.”

Academic excellence is at the heart of everything we do at the Darla Moore School of Business. As a top-ranked business program, we immerse our students in their chosen field, and offer a strong business core to prepare them for the global marketplace.