Military-affiliated students play an important role at the University of South Carolina, which has been ranked among the Best Colleges for Veterans by U.S. News and World Report.

First, it’s a large number, with somewhere around 1,200 to 1,300 students who are active or retired military. And it’s a group that is expected to grow, with the university’s strategic plan calling for a 20 percent increase in military-affiliated student enrollment by 2025.

Next, it’s a high-performing group.

“Statistics show that those students typically perform at a higher level than their traditional peers — they have higher GPAs, they tend to come in with more maturity, and they tend to succeed at a higher rate,” says Todd McCaffrey, the university’s senior director of strategic partnership for military and government programs.

And finally, military service members and veterans add to the variety of perspectives and voices on campus — bringing “diversity of ideas and experience that is helpful for the broader university population,” McCaffrey says. They also bring government entitlement education benefits, providing an important stream of tuition to the university.

To mark Veterans Day, UofSC Today spoke with a student, faculty member and alumna who are military veterans to share their stories of service.

Candace Terry always had an aptitude for languages. She was just 11 years old when she decided she wanted to study foreign languages, and by 13 she knew she would join the military. 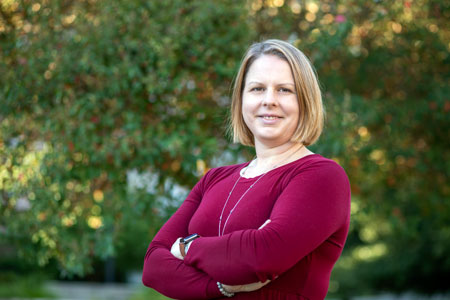 Alumna Candace Terry is the new director of governmental affairs for the S.C. Department of Veterans' Affairs.

She graduated from high school in Tennessee a semester earlier than her classmates, and spent a year “being a teenager, being free. Then September 11th happened, and I knew it was time to stop fooling around and go. I was 19 when I joined.”

She served eight years as a Russian and Persian Farsi cryptolinguist in the Navy before leaving the military for the University of Kentucky, where she earned a bachelor’s degree in Russian studies. She spent a few years working in contracting before deciding to make a career change.

Her stepmother had played softball for the University of South Carolina, and, while her father was a Clemson fan, Terry says she was raised as a Gamecock. When she started applying to graduate school, she knew it was time to move to South Carolina and enroll in the College of Social Work. She initially thought she would go into clinical work and be a counselor, but her extracurricular involvement with veterans on college campuses steered her onto a different path.

“I’m a natural advocate. I spent most of my time doing that at the University of Kentucky and the University of South Carolina. I served as president of the (UofSC) Student Veterans Association, doing advocacy work to gain services and positive imaging for veterans on campus,” she says. “I said, ‘If this is how I’m spending my free time and it’s what I love doing, I need to do this as a career.’ ”

In May, she earned her Master of Social Work degree along with a Certificate in Social and Behavioral Health with Military Members, Veterans and Military Families.

Terry, who also is the mom of three children, ages 15, 13 and 8, is now continuing her advocacy work on behalf of military members and veterans. She is the director of governmental affairs for the S.C. Department of Veterans’ Affairs, a cabinet-level agency.

She also is on the board and is a founding member of the nonprofit South Carolina Veterans’ Higher Education Group, which works to help veterans who attend colleges and universities in the state.

She said her time at UofSC was a constant learning experience, and her experiences at the university prepared her for the job she started in June.

“I’ve been able to lean on a lot of the people and relationships I already built at the university,” she says. “And I’m learning a lot of new things here.”

On July 27, 2007, Scott Craig’s platoon was ambushed by about 150 fighters in the rugged mountains of eastern Afghanistan. In a nine-hour firefight that became known as the Battle of Saret Koleh, two American soldiers died, including the troop commander who was killed by a rocket-propelled grenade, while another 10 Americans were wounded. 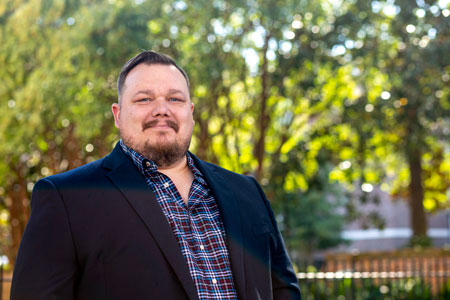 Scott Craig, a Purple Heart recipient, will earn his degree in computer science from the College of Engineering and Computing.

One of those wounded was Craig, an Army Airborne Infantryman who spent 27 months serving in Kamdesh and Logar provinces during the war in Afghanistan. At the Battle of Saret Koleh, he was shot in the hip and medically evacuated to a hospital in Afghanistan, where he worked in the tactical operations center monitoring computers before recovering and returning to battle.

On another deployment to Afghanistan, he was injured as he tried to help get a fellow soldier out of a firefight. An MRI months later revealed a torn meniscus and an ACL injury from the incident.

For his service, he received a Purple Heart, and was medically retired from the Army. But he still is a military spouse, as his wife is on active duty stationed at Shaw Air Force Base in Sumter, South Carolina. Now, with his wife deployed to Kuwait, he spends his days taking care of his three children (ages 10, 7 and 3) and taking five classes this fall as he works to complete his degree in computer science from the College of Engineering and Computing at UofSC.

He also is a teaching assistant and serves as the president of the university’s Student Veterans Association.

“The Student Veterans’ Association has been the focus of my charitable work. I was working at a nonprofit in Germany when my wife was stationed there, so service is a big deal to my family. I wanted to volunteer and give back.

His work-study job allows him to work as a veterans’ service coordinator for the VA.

“I want to make sure that veterans don’t just attend USC, but excel here,” he says. “Academically, we outperform every group. A lot of that comes from age and discipline. For us, it’s a career move rather than going to college to experience life. This is our job.”

Nikki Wooten’s father encouraged her to join the military, telling her it would be a great opportunity and that “20 years would go by before you know it.”

So, during her spring semester as a freshman at the University of North Carolina at Chapel Hill, she took his advice and joined the Army Reserves. 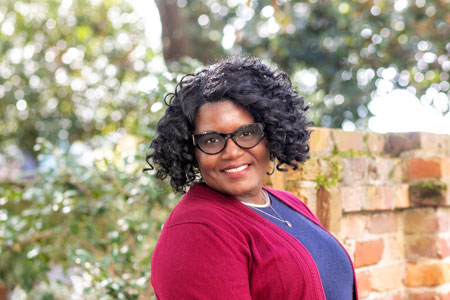 Nikki Wooten, an associate professor in the College of Social Work, has spent 31 years in the Army Reserves and the National Guard.

Wooten earned her degrees from UNC, Howard and the University of Maryland, and is a tenured associate professor in the College of Social Work at the University of South Carolina. She teaches military social work and adult psychopathology graduate courses and conducts behavioral health services research on military and veteran populations. She also has a research appointment at the Dorn Veterans Administration Medical Center.

And, more than 31 years later, she continues her military service. She began her career by attending basic training at Fort Jackson in 1989, and now is a lieutenant colonel in the Army Reserves.

“My entire career I’ve been in the Reserves or the Guard,” she says. “I’ve gotten three degrees while being in the Army  Reserves or the National Guard, and I never asked for an extension on a paper, exam or anything.”

She spent three years on the faculty at Boston University when she was approached at a conference about a faculty position at South Carolina. The move here in 2013 allowed her to be closer to her family in North Carolina and to work in a military-friendly state.

As coordinator of the graduate certificate in Social and Behavioral Health with Military Members, Veterans and Military Families, she helps prepare social workers and health professionals to identify and assess military and deployment stressors, mental health and substance abuse problems of military and veteran populations. It’s training that’s especially important in a state like South Carolina with a large military population.

She says it’s important that students, social workers, health professionals and even chaplains understand the type of questions to ask when doing assessments with people affiliated with the military.

“They need to know how to incorporate that information about their military service experience into their assessment. They need to know how they can provide services through their civilian agency. And they need to know what are the rights and entitlements to services that a service member or veteran may have through the Department of Defense or the Department of Veterans Affairs,” she said. “The certificate training is a way they can gain knowledge about how to provide supportive services and supportive care to military members, military families and veterans.”

Academically, we outperform every group. A lot of that comes from age and discipline.

Wooten has been able to combine her military service, teaching and research, with more than 45 publications on military, veterans and vulnerable populations. She has developed four military social work courses, and conducted more than 85 invited and peer-reviewed presentations, nationally and internationally. In November 2019, she was invited to the White House to provide input for the National Association of Social Workers’ response to the President’s Roadmap to Empower Veterans and End a National Tragedy of Suicide Taskforce. As part of her military service, she now serves as small group leader/instructor for the U.S. Army Command and General Staff Officer’s Course.

“I was shy in high school. In the military, if you’re going to be in charge, you can’t be shy. The motto is, when you’re in charge, take charge. In my unit (as an undergraduate), there were a lot of other college students,” she says. “I have friends for a lifetime that are just like family. It’s that commonality, camaraderie and collective experience.”

A new Veteran and Military Student Center of Excellence will soon open in the Byrnes building on campus, providing a place where military-affiliated students and veterans can meet and access services. Learn more at the Veterans and Military Services website.