Education major found her purpose and her people

You could say Akiko Colbert had on-the-job training for the bachelor’s degree in education she’s earning this December.

Colbert’s mom owns and operates a large child development center near Columbia, and Colbert, the oldest of four siblings, often works part time there, assisting with curriculum development, teaching and other tasks large and small. 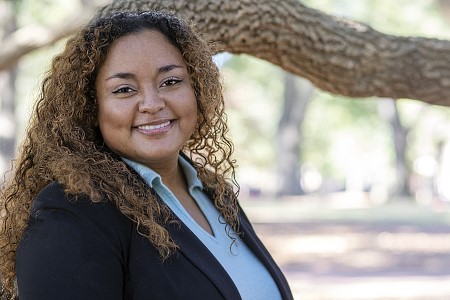 “I wanted to get a degree in something that would be useful in the future, and running the family business at some point is a possibility,” says Colbert, who earned an associate degree in early childhood education at Midlands Tech before starting baccalaureate studies at the University of South Carolina in 2017.

“It was like a dream come true to come to Carolina — it fits me,” she says. “And even though I lived at home and commuted to classes, I really wanted to apply myself and find opportunities to get involved.”

Colbert did some background research on a sorority that she wanted to join — Kappa Delta Chi Inc. — and began serving as the chapter’s vice president soon after being initiated. She was president of the sorority in 2019 until her practice teaching semester began.

“I chose middle school because I’ve worked with younger children so much. Both ages need extra nurturing — in pre-school and again in middle school, and I feel like I have that nurturing background,” Colbert says.

I started out at Carolina timid and shy, and I’ve learned to step outside my comfort zone.

— Akiko Colbert, who graduates this month with a bachelor's degree in education

It was in the midst of the practice teaching experience that Colbert realized she would rather work alongside students as a guidance counselor than be a teacher at the front of the classroom.

“Middle school is tough because a lot of students need help to deal with things like peer pressure and social media,” she says. “I want to give them perspective and let them know that everything they learn in middle school will set them up for the rest of their life.”

She’s planning to begin graduate studies in school counseling next summer and will continue to assist at her family’s child development center after graduation in December. In the meantime, she’s soaking up the final weeks of life as an undergraduate, an experience she says was fun and went by fast.

“The highlight of my time at Carolina wasn’t any one thing but just being in the bubble of student life and hanging out with my people,” Colbert says. “Whether that was going to football games or doing community service with my sorority sisters or us hanging out in Thomas Cooper Library and acting like we were studying but really just chatting for hours.

“This is the time to enjoy yourselves but still work toward something that will help you out in life. I started out at Carolina timid and shy, and I’ve learned to step outside my comfort zone. I would say to other transfer students, ‘Get out of your shell and go do it. There are so many clubs and organizations on campus, you can find your people.' ”