If you want to find signs of life on Mars, you need a chemist like Mike Angel.

NASA’s Mars 2020 Perseverance Rover will land on the Red Planet on February 18 and begin to study rocks and soils in search for evidence of past Martian life, which might be anything from biogenic organic compounds to ancient fossils. Angel is one of hundreds of scientists who will work together to direct the rover. 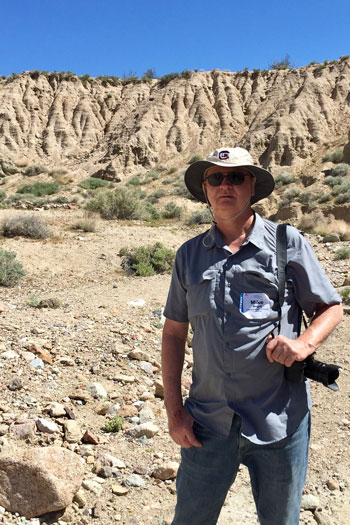 UofSC professor Mike Angel participated in a training exercise for the Mars 2020 mission in the Mojave desert .

“We’re good at analyzing things,” says Angel, a Carolina Trustee Professor in the College of Arts and Sciences. “If you’re looking for organics in rocks on Mars, there’s nobody better than a chemist.”

Earlier in Angel’s career, he developed a way to do remote laser analysis ― using a laser to analyze chemical substances at many meters distance. In 2012, NASA sent the Curiosity rover to Mars with a laser spectrometer, called ChemCam, similar to the one Angel had designed.

“It turns out it was perfectly suited for planetary exploration,” Angel says.

Although he wasn’t involved directly with Curiosity, Angel worked informally with many of the NASA team members from that project. When the agency began working on the Perseverance program, Angel joined the science team.

The Mars2020 science team has spent more than seven years developing a suite of seven new rover instruments for Perseverance’s landing, including a remote laser spectrometer called SuperCam. They studied maps of Mars to determine which areas would be the most fruitful in the search for signs of life. They ran simulations, virtual missions, to practice every aspect of the mission.

“One of the great things about working with NASA is that they encourage everyone who is on the team to become involved in every aspect of the mission," Angel says. “I've been involved almost every day for the past couple of years with training missions, learning how to take samples, learning how to download data from the rover so we can analyze it. I will be very involved with looking at the images when they first come back, deciding what we should be measuring, what instruments will be involved and what we should be looking for as we take those measurements.”

SuperCam includes four laser spectroscopy measurements. Each one shines a laser at an object such as a rock, and then measures changes in the wavelength and intensity of the light that comes back. That data will tell the scientists about the chemical composition they find on the Martian surface.

The team plans for Perseverance to explore Jezero Crater, which scientists believe was once a deep lake with flowing water. “Where might you find life evolving? In an ancient lake bed,” Angel says. “It makes sense that this would be a great place to start.”

Angel says the mission will look carefully for signs of ancient life, rather than search for existing or “extant” life, as Jezero Crater has been dry for billions of years.

“We’re not expecting to find a frog, or anything that obvious,” he says. “We’re looking for telltale signs ― we call them signatures.” That can include anything ranging from a fossil to organic compounds that a living creature may have created billions of years ago.

“Life has certain signatures, and when you find them, you know,” Angel says, adding that any sign of past life would be exciting.

Although scientists suppose there is life elsewhere in the universe, “so far we have only one data point,” Angel says. “Earth.”

“But if we find one bacterium, even one little cell, even a fossil of a cell, or even a trace that a single cell would have left, it would change the entire world. Then we will know there is life somewhere else. That would be as big a scientific discovery as there can possibly be.”