Nearly 150 years before the original Star Trek TV series came to be, South Carolina College built its first observatory to boldly go where no one had — wait, it wasn't that dramatic! But that 1817 observatory made way for another campus observatory building in 1852 and still another in 1928. That last one, the Melton Memorial Observatory, is still going strong today, offering spectacular views of the night-time skies on clear Monday evenings.

It was an exciting time early in the 19th century when South Carolina College announced plans to build its first-ever observatory. Professors and students were looking forward to exploring the nighttime sky with a powerful telescope …

“To seek out new life and new civilizations … to boldly go where no one has gone before!”

OK, wait, wait — hold up — it wasn’t like that at all. I mean, when that first observatory was built in 1817 no one was even talking about life on other planets, much less seeking it out. Heck, it would be another 30 years before the planet Neptune was even discovered.

That first observatory on what is now the University of South Carolina campus was a modest affair and not much is known about it except that it was located in a garden near the Horseshoe, behind DeSaussure College. History books about the early campus describe it as octagonal in shape, but no one knows what kind of telescope they had to observe the nighttime skies. 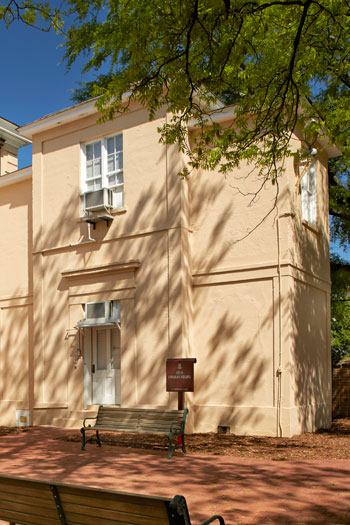 The Old Observatory, built in 1852, is only 18 feet by 20 feet was used for its original purpose only until the Civil War. Its telescope was stolen sometime during the war.

A little more than three decades later, in 1852, a second observatory was built not far from the first one, and it still stands today. It’s now called the Old Observatory, and it’s an odd-shaped building, just 18 feet by 20 feet. It had a 12-foot diameter revolving dome that allowed professors and students to poke a telescope up into the darkness.

The telescope itself was more than 8 feet long and largely made of brass with a 6-3/4 inch refractor. As fate would have it, that observatory was not used for very long. Its revolving dome mechanism malfunctioned after a few years, and when the Civil War began in 1861, all studies, including astronomy, came to an end.

When the college reopened after the Civil War, the entire campus was in a state of disrepair. The observatory seemed to have taken its fair share of punishment. The windows had been smashed and far worse — the telescope itself had vanished, probably stolen by thieves who tore apart and sold the valuable brass casing.

So that was the end of South Carolina boldly going where no one had gone before — at least for a few more decades. By the way, the 1852 observatory building was never used again as an observatory. Until 1897 it was a fraternity hangout and for a time the building was used as a storage locker for golf clubs. Why there were so many bags of golf clubs on campus is a story that we’ll save for another day.

In the early 1920s, a man named J. Wilson Hanahan from Winnsboro, S.C., donated a fine telescope to the university — a 16-inch diameter Newtonian reflector. The university president at the time, the energetic William Davis Melton, was lobbying the state legislature for all sorts of improvements to the campus, including a new observatory building to house that fancy new telescope. His requests were turned down, but Melton had a friend with deep pockets.

Edwin Siebels, an 1885 South Carolina graduate, had promised Melton he would provide funding for a new observatory. And when Melton died unexpectedly in 1926, Siebels followed through on his promise. The Melton Observatory, named in honor of the late president, opened in 1928, with great expectations. 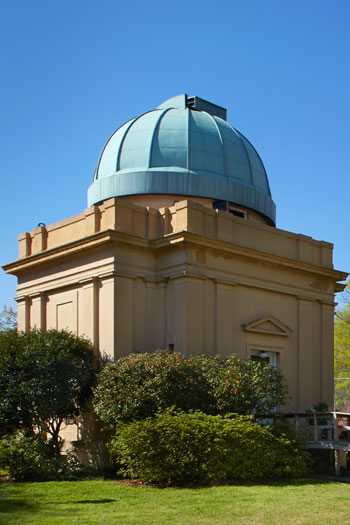 The Shatner-esque voice returns: “to boldly go where no one has gone before!”

Well, hold on. It was a brand-new observatory and it did have a cool telescope, but this was still only 1928 — the planet Pluto hadn’t been discovered. That would happen two years later.

And people weren’t going to see science fiction movies like Star Trek back then — 1928 was the year they watched the debut of a cartoon called Steamboat Willie. We know him better as Mickey Mouse.

Nearly a century later, the Melton Observatory is still in service and it’s still not going where no one has gone before. But that big telescope — the one Mr. Hanahan donated in the early 1920s — is still the main attraction. It’s been modified with a computerized mechanism that moves it ever so slightly to cancel the Earth’s rotation. And on clear Monday evenings, the observatory is open for business, zeroing in on points of interest in the nighttime sky, including the moon, planets, star clusters, nebulae and galaxies.

These days, because of COVID-19, the observatory has switched to streaming on Facebook live, so you can still get a stunning view of objects high above. Martin Bowers is an amateur astronomer who manages the observatory building for the university’s Department of Physics and Astronomy.

Martin Bowers: I really became interested in astronomy as a college student myself and so I figure it’s kind of a way of giving that back and it’s invigorating to have so many bright young people coming along and asking intelligent questions about what they’re looking at and it’s just a fun experience, an opportunity to work with this marvelous old instrument and reconnect with college students and try to give them some insight and enthusiasm about looking at the night sky.

If you’ve got some enthusiasm for looking at the night sky, check out the webpage for the Melton Observatory. And, when this pandemic is behind us, plan a visit to the observatory on a clear Monday night.

Bowers It’s a wonderful building. If people haven’t been here before, once the COVID restrictions are no more, stop by and have a look. It’s a good way to spend an evening.

That’s all for this episode of Remembering the Days. Next time, instead of looking through at objects that are light years away, we’ll be taking a look back just a few decades ago at a fad that once was popular on college campuses. It was called streaking. You don’t want to miss that one.

For the Office of Communications and Public Affairs, I’m Chris Horn. See you next time.