Ann-Chadwell Humphries autographs her poetry books with an embosser. She slips the clamp’s lips over the title page and squeezes the handles together.

Then she runs her fingers over the raised seal, containing her initials, her name, and the words, “In Poetry.”

Next, she uses a credit card-sized template to guide her pen so she can scrawl a personal note in a nearly straight line that she will never see. In this case, she signs the book for a reader who is working on poems again thanks to her encouragement. “You paid me a high compliment,” she writes. “You’re writing again!”

As a blind poet, she takes joy in helping someone else reconnect with the muse.

Humphries’ book is An Eclipse and a Butcher, a collection of nearly 40 poems on topics ranging from art to family life, from eclipses to blindness. She wrote and workshopped some of the poems in graduate classes at the University of South Carolina.

Even before the book came out in November 2020, Humphries was immersed in South Carolina’s poetry community. She enters contests; she sponsors contests. She reads her poems in Facebook videos. She speaks to school groups and women’s leadership conferences.

But she says she hardly touched poetry before she became fully blind in 2012.

One of her poems, “My Blind Obsession,” puts it this way:

Like the fine china for special occasions,
poetry had a place at our family table
but blindness dragged poetry out of storage for everyday use,
made it accessible, aired it out.

“It's just the way I choose to spend my life now,” says Humphries. “Poetry is so layered. It's so particular, and yet so universal. Plus, it doesn't take up much space. It's not expensive. If you're tight on time, you can read a poem, a few poems, and let it set, and that has as much staying power as a novel. It helps me express my thoughts out loud as well as on paper and on screen.” 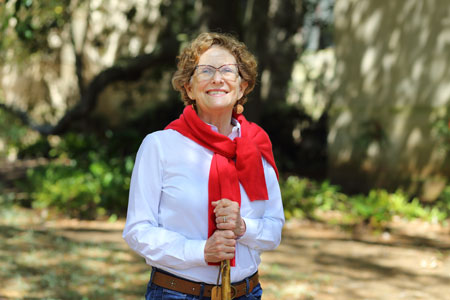 Ann-Chadwell Humphries hardly touched poetry before she became blind in 2012. Today, she is immersed in South Carolina’s poetry community and recently published the book An Eclipse and a Butcher.

Humphries, now 67, says her sight started disappearing in the 1990s due to retinitis pigmentosa, a genetic disorder that causes cell loss in the retina.

At first it was like looking through a hula hoop, she says. But her field of vision shrank so she was looking through a donut. Then, a straw. Finding a cursor on a computer screen became difficult, but she could still read and handwrite and push a cart of medical charts across the hospital campus where she worked.

But at age 55, she decided she couldn’t keep up anymore. Humphries retired and didn’t look back.

"All of a sudden, I had an open schedule,” she says. She and her first guide dog, Brego, earned the state’s Ultimate Outsider T-shirts by hiking in every state park. She started taking writing classes at a local senior center.

“I’d written a lot of memoir," Humphries says. “I could handle it then. But as my vision grew smaller, I got lost in all those pages.”

Poetry, with its shorter lines, became her preferred genre.

Eventually, a friend dared her to enter a contest for poems about self-portraits.

“That was the first poem I'd ever entered," Humphries says. “Both of us were accepted! I was like, oh my gosh, we're going to be in a chapbook!”

With that taste of success, Humphries was hooked. She chose to take poetry a step further by enrolling in courses at the University of South Carolina. First was a class with Nikky Finney, an acclaimed poet and winner of the National Book Award. Later, Humphries and two friends completed an independent study course with Ed Madden, English professor and poet laureate of Columbia.

The staff in the Student Disabilities Resource Center helped to ensure all course content was accessible for the visually impaired. Handouts were typed, assignments were digitized. Humphries calls the disabilities staff “sacred advisors” for helping her access education.

“They were welcoming and affirmed me for being there,” she says.

Madden says the process of making his courses accessible helped him improve his teaching for all students. “I'm a better teacher because of having worked with Ann," he says. “I'm more conscious and more intentional.”

Madden also was impressed by his student’s talent.

“She clearly has a heightened sense of musicality, of what the words sound like,” he says.

Other people agreed. Humphries received a Sun Magazine scholarship and won awards from the Poetry Society of South Carolina and several publishers. She participated in online poetry workshops through the Hadley Institute for the Blind, the University of Pennsylvania and other organizations.

Cindy Boiter, the editor of the local Jasper Magazine and publisher of Muddy Ford Press, took note of the rising poet. She liked the intimacy in Humphries’ poems.

"I like the way that she creates these possibilities for the people in her poetry that allow you to continue to develop them after you finish the poem,” Boiter says.

She adds that many of Humphries’ poems have a surprise factor to them.

“You're reading along, and you don't realize until you've just finished it, or you're two-thirds of the way in, and you say, ‘Oh my! I see this is going somewhere I wasn’t expecting.’”

For example, there is “Three Dreams,” a poem that starts with describing a Kodachrome photograph of Humphries and her two sisters when they were children. Going on, it sounds like a playful story about girls getting ready for bed until the last line surprises the reader with heartache, tension and nostalgia.

Boiter also admires Humphries’ dogged determination to write often and publish her work. “She's by far one of the most determined and enthusiastic people I've ever met in the industry,” Boiter says.

That combination of talent and zeal made Humphries a perfect candidate for Muddy Ford Press’s Laureate Series, which highlights emerging poets in South Carolina with the help of established poets. When Boiter and Madden asked Humphries to be a part of the series, she was surprised but eager.

“That came out of the blue, like a lightning bolt," Humphries says. “They selected me. How shocking is that!”

Madden worked with Humphries to select and refine the poems for the book that became An Eclipse and a Butcher. Humphries was thrilled with the outcome.

“He saw things in my poems that I did not see," she says. “That was a wonderful investment in me.”

With the book coming out in the middle of a pandemic, Humphries memorized and recited some of her poems for a launch party held over Zoom. Madden and others pitched in by reading poems for the audience.

Humphries gives great credit to a community that has helped her succeed. Although smartphone technology helps her record ideas and compose poems, friends and family empower her to be a part of the poetry community. Her husband, Kirk, along with friends and community volunteers, drive her to classes or speaking engagements and help double-check which words are italicized or bolded in her poems, or that the words are spaced to have the dramatic effect she desires.

She gives credit to poetry for helping her see the world in new ways.

Occasionally, people ask Humphries whether she would take her sight back if she could — something that could be medically possible in her lifetime.

She chokes on her answer.

“We have grandchildren now,” she says. “I would like to see them. But I can’t give up this other beauty.”

Beauty she once did not see.

“Poetry has made me focus on this gold, this beauty we have right before us, every day, if we will acknowledge it.”