Over 100 companies publicly denounced Georgia’s new restrictive voting law, Major League Baseball went beyond words by moving the 2021 All-Star Game from Atlanta to Denver. In The Conversation, law professor Benjamin Means writes about how corporations use their economic power as leverage to get what they want from lawmakers.

Over 100 companies, including Delta Air Lines and Coca-Cola, reacted to Georgia’s new restrictive voting law by publicly denouncing it. While some executives are discussing doing more – such as halting donations or delaying investments, MLB is among the few organizations to go beyond words: It immediately said it was going to move the 2021 All-Star Game from Atlanta to Denver.

Both MLB’s decision to relocate the July 13 game and the many corporate press releases issued about the voting law drew a swift rebuke from Republicans, who vowed boycotts of baseball and the products these companies produce. The Senate minority leader even threatened retribution if companies didn’t stay out of politics – with an exception for campaign contributions.

As a corporate governance scholar, I have studied how corporations use their economic power to get what they want from lawmakers. I believe Republicans’ angry reactions signal just how deeply concerned they are that other companies might follow MLB’s lead.

The nature of corporate power

To help understand why, consider this: MLB’s decision is estimated to cost Georgia as much as US$100 million in lost economic activity.

Corporations understand that the jobs and tax revenue they can provide – or withhold – give them power at the negotiating table. Other states are all competing for the same investments. Tesla, for example, agreed to build a factory near Reno, Nevada, in 2014 in exchange for $1.4 billion in state benefits after a bidding war.

National Football League teams have been especially ruthless in their negotiations with cities and states and have demanded hefty taxpayer subsidies for new stadiums. By threatening to move to another city, team owners can extract hundreds of millions of dollars in new benefits.

The dynamic is easy to understand. State lawmakers usually cater to corporations because they want to attract business investment and keep it.

When corporations leave, they can cause property values to stagnate and tax revenue to plunge – as happened to Hartford, Connecticut, a few years ago after several large insurance companies abandoned the city.

How corporations use their leverage is up to them. They can seek to feed their bottom lines or to advance social causes. Traditionally it’s the former. For example, many U.S. companies lobbied for a $1 trillion corporate tax cut in 2017.

But increasingly it’s the latter too.

A rise in corporate social activism 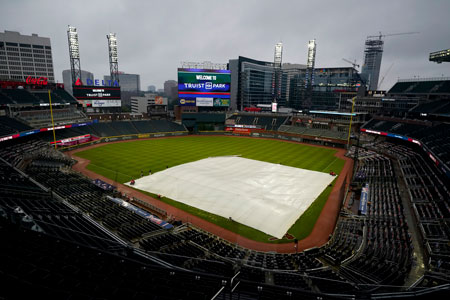 In 2015, the threat of corporate boycotts caused then-Gov. Mike Pence to support changing an Indiana law that would otherwise have allowed anti-gay discrimination in the name of religious freedom.

Something similar happened in 2016 when Georgia’s governor bowed to corporate pressure and vetoed a bill that would have legalized discrimination against same-sex couples on religious grounds.

And again in 2017, North Carolina partially repealed a law that targeted transgender people over concerns that boycotts – such as by PayPal, the NCAA and former Beatle Ringo Starr – would cost the state $3.76 billion over a dozen years.

Those boycotts, of course, did not end efforts to restrict LGBTQ rights at the state level, but they demonstrated that when corporations band together, they are capable of exerting enormous economic and political pressure to advance social causes.

And that possibility is likely on the minds of Georgia lawmakers following the MLB’s All-Star Game decision.

Despite the apparent leverage companies yield, it’s not simple for most companies to just get up and leave.

For example, Delta – whose largest hub is in Atlanta – benefits from a tax break on jet fuel. And Coca-Cola’s ties to Georgia are deep and long-standing, dating back to a soda fountain in Atlanta in 1886. Companies don’t sever such ties or give up generous tax breaks easily – and neither Delta nor Coke has even suggested that it might.

But if the many companies that publicly objected to the law want to have an impact on policy – and see the law changed or repealed – money has to be at stake, as I learned in my own research on how North Carolina changed its 2015 law only after companies began boycotting the state. Delta and Coca-Cola employ thousands of people and generate billions of dollars in economic activity in the state. That’s serious leverage they could use if they felt the voting rights issue was important enough.

Ultimately, this threat of lost business is what makes corporations a formidable adversary. The question, then, is what it would take for them to leave Georgia.

Without knowing MLB’s internal deliberations, I cannot say why the league dropped Atlanta with so little hesitation, but there are some likely possibilities.

First, just as a matter of timing, MLB may have been concerned about holding the All-Star game in the midst of a political controversy, drawing unfavorable attention, especially in light of its own recent commitment to have zero tolerance when faced with racial injustice. MLB may have also taken an opportunity to show solidarity with its players, given the high-profile advocacy for social causes of many professional athletes. Research suggests that employee diversity is an important consideration for corporations on matters of social justice.

Finally, just as a practical matter, moving the All-Star game may have offered MLB some public relations benefits at relatively low cost to itself.

And those same reasons are likely why other sports leagues – such as the NCAA in North Carolina and the NFL with the 2016 Georgia bill – are often out front on these types of social issues. Georgia should not count on any backlash subsiding soon; the NCAA withheld championship games from South Carolina for 15 years until the state removed the Confederate flag from the Statehouse grounds.

For now, MLB’s decision has not prompted the kind of mass corporate revolt that could force change. On April 12, Will Smith’s production company said it was pulling its upcoming slavery-era drama, “Emancipation,” out of Georgia because of the voting law.

But it’s unclear, in particular, whether any Georgia-based corporations will follow MLB’s lead by removing business operations from the state. The voting law that passed is actually less restrictive than earlier versions of the bill, suggesting that criticism – including from companies – likely had some impact. Lawmakers may have made some changes precisely to avoid sparking a stronger corporate response.

But if companies like Delta and Coca-Cola really want to make a difference and use their leverage on this issue, they will need to go beyond words. Their actions would speak much louder.

Article updated on April 12 to add references to production of “Emancipation” being moved out of Georgia.

Banner image photo credit: The logos may have been printed too soon. AP Photo/John Bazemore