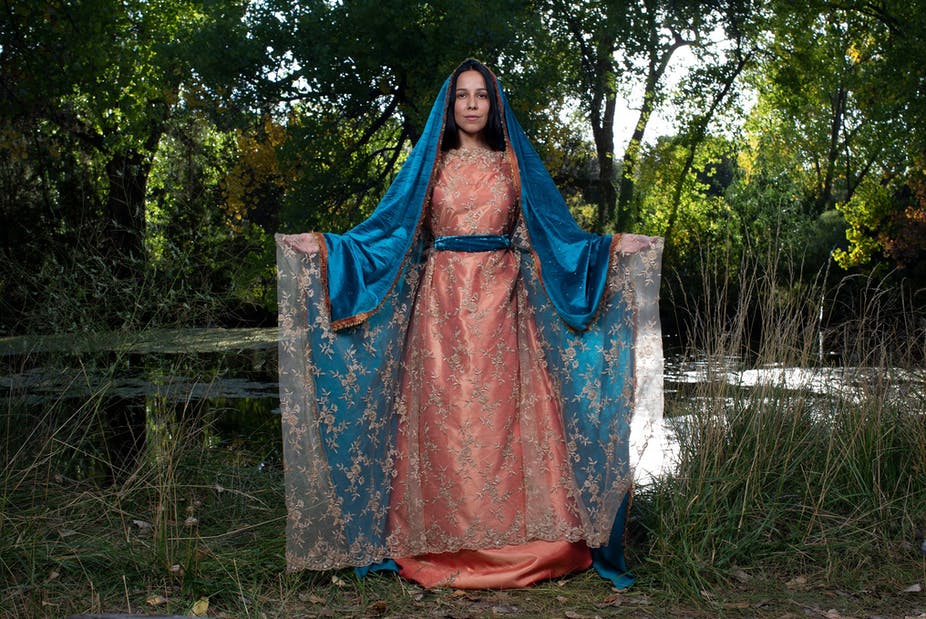 Although the film Lady of Guadalupe portrays the story of the Virgin of Guadalupe for a broad audience, Rebecca Janzen, professor of Spanish and comparative literature, writes in The Conversationultimately it sanitizes the real-life brutality of the Church toward Indigenous peoples in the 16th century.

The film “Lady of Guadalupe,” first released in 2020 and now available on many streaming services, mixes a fictional retelling of the 16th-century appearance of the Virgin Mary to a Mexican peasant named Juan Diego with the tale of a wholly fictional 21st-century reporter named Juan working on a story about miracles involving the Lady of Guadalupe.

As a researcher of religion, I’m interested in how religious history gets incorporated into contemporary faith and movies. It reminds me of the documentaries I watched as a child about the history of my own religious community: Mennonites who emigrated from Ukraine to Canada.

Religious communities, like the Mennonites and Mormons I have studied, can act in ways that may perplex people. As I contend in my forthcoming book about religion and film in Mexico, when films use religious symbols, experiences or figures, they make larger historical and social commentary. In Mexico, that often involves presenting critical views of Catholic priests as a way to comment on Mexican political leaders.

As I watched “Lady of Guadalupe,” I was curious to see how it might handle Catholicism’s role in the colonial period. Unfortunately, that aspect of the movie leaves a lot to be desired. Although it portrays the story of the Virgin of Guadalupe for a broad audience, ultimately this film sanitizes the real-life brutality of the Church toward Indigenous peoples in the 16th century.

The Virgin of Guadalupe in film history

Many filmmakers have been drawn to the story of the Virgin of Guadalupe, which is one of the earliest and most enduring Catholic miracle stories in the Americas. Juan Diego is said to have experienced a vision in 1531 of the Virgin Mary in Tepeyac, an area that is today the northern part of Mexico City.

When his bishop demanded proof of the apparition, it is believed the Virgin again appeared to Juan Diego and told him about a place where he could pick some roses to bring back to the bishop. It’s said that when the bishop looked at the roses, the Virgin appeared to him as well. The Catholic Church confirmed this miracle when it canonized Juan Diego in 2002, making him Mexico’s first Indigenous saint.

Over the five centuries since the report of Juan Diego’s vision, the Virgin of Guadalupe has come to be credited with many other miracles. In the fight for Mexican independence, Catholic priest Miguel Hidalgo used her images on his banners, uniting Mexicans in their fight against Spain.

Since then the Virgin of Guadalupe has been a hugely important national symbol. So it’s no surprise that many filmmakers would be drawn to this story. One of the earliest known film versions of this story, “La Virgen de Guadalupe” or the “Virgin of Guadalupe,” appeared in 1976, and more than a dozen have appeared since.

Film scholar and priest Antonio D. Sison has identified two common themes in these films. The stories center either how priests used the Virgin to further their attempts to convert Indigenous people to Catholicism, or on the supernatural aspects of her unexpected appearance to Juan Diego. 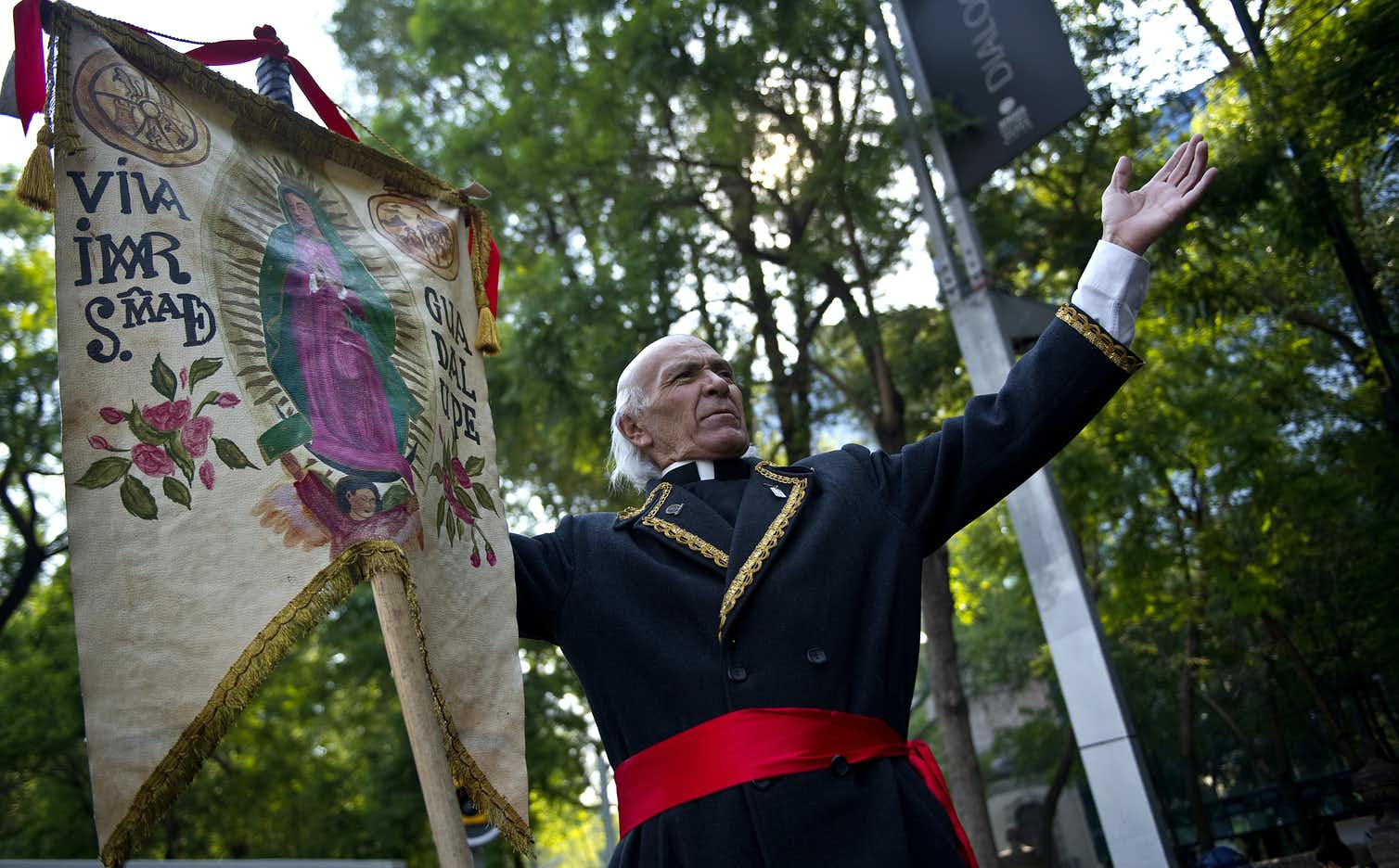 A 2011 movement in Mexico against drug trade violence and crime evoked the legacies of two powerful figures in the country’s history: independence fighter and priest Miguel Hidalgo, and the apparition of the Virgin of of Guadalupe. Yuri Cortez/AFP via Getty

I argue that this recent film about the Lady of Guadalupe falls into the first of these categories. But the film avoids uncomfortable truths.

In terms of the historical record, the film simplifies the role of the Catholic Church in Spain’s brutal colonization of Mexico’s Indigenous peoples in the 16th century. When it portrays the colonial period, it shows priests using the apparition of the Virgin Mary to an Indigenous man as a way to encourage conversions to Catholicism. But it leaves out the ways in which the Spanish colonizers destroyed symbols of Indigenous religions, killed local political leaders and forcibly kidnapped children and converted them to Christianity.

Instead, the film offers a few brief scenes of one-on-one interpersonal violence that do nothing to convey the complete genocidal decimation of cultures and traditions that took place during the colonial period.

Pedro Brenner, the producer of “Lady of Guadalupe,” has asserted that the film offers “a guide to better understand what it means to be Latino in the modern day,” while some Catholic critics believe “Lady of Guadalupe” inspires religious devotion. But in my view both are overly simplistic. Being Latino in the United States is not exclusively related to Mexico, nor to Catholicism, and focusing solely on the role of the Virgin of Guadalupe in Latino identity is inaccurate. Moreover, the film inspires a sentimental view of the past.

Comparison with other films

The Ecuadorian director Santiago Parras’ 2006 film “Guadalupe” provides an important comparison to 2020’s “Lady of Guadalupe” in how well it handles historical accuracy and historical truths.

Released to commemorate the 475th anniversary of the apparition of the Virgin of Guadalupe to Juan Diego, the film juxtaposes the story of two archaeologists who attempted to uncover the truth behind the Virgin’s miraculous appearance. In doing so, it combines both scholarship and religious devotion.

For example, when the the Virgin appears before Juan, she speaks in Nahua, an Indigenous language spoken by people living in what is now Mexico City, including the Aztecs. This reflects one of the details of the actual miracle story: that the Virgin appeared to Juan Diego as an Aztec princess.

“Guadalupe” is not a perfect film. But its emphasis on scholarly inquiry and attempts to use original source material more effectively combine religious devotion and scholarship than “Lady of Guadalupe,” which relies too heavily as a film on a selectively edited vision of the past. In my estimation, this absence of critical engagement with the account of the Virgin’s appearance does not do justice to religious devotion.

Banner image photo credit: The 2020 film is the latest of many movie takes on this Catholic miracle story. @ladyofguadalupemovie via Facebook