As a marathon runner, Nate Senner tries to push the limits of his own physiological endurance, running miles and miles across challenging terrain. As a population biologist at the University of South Carolina, Senner studies migratory bird species whose feats of endurance make his own look almost puny by comparison.

What interests Senner most is not just the extremes that different bird species can endure but the many environmental variables to which they must adapt — with the long-term survival of their species population hanging in the balance. 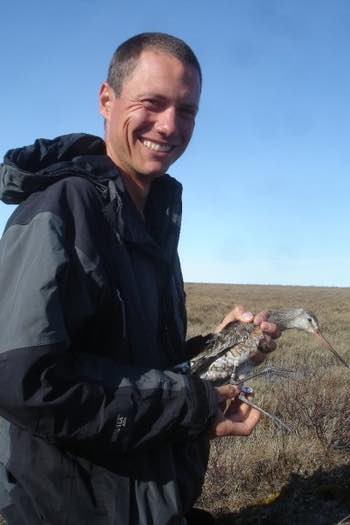 Population biologist Nate Senner holds a Hudsonian godwit, which flies a week or more without food or water in its annual migration from southern South America to the United States.

“When lots of different things change at once, it’s hard to respond,” Senner says. “The thing we see with the birds we study is that they’re losing habitat, temperatures are getting warmer and winds are changing. You throw one more random change into their environment and it can become really difficult to respond to all of those at once.”

Senner’s research lab studies three so-called marathon migratory species — the whimbrel (pictured at top, photo by Andrew S. Johnson), the Hudsonian godwit and the red knot, all of which travel extreme distances every year. The godwit, for example, flies from southern South America to the United States, often going seven, eight or even nine days at a time without stopping for food or water.  Whimbrels fly up to 7,000 miles from South America to northern Canada, with many of them stopping off at a halfway point in South Carolina.

Maina Handmaker, a graduate student in Senner’s lab, was part of a research team which recently discovered that half of the Atlantic coast whimbrel population — about 20,000 birds — roosts on Deveaux Bank, a tiny barrier island at the mouth of the North Edisto River near Charleston.

Handmaker is now leading the project in Senner’s lab to tag whimbrels with GPS tracking devices to learn more about their foraging habits while they roost in South Carolina, building body weight for the remainder of their migration to Canada to nest and rear their young.

“Learning more about how whimbrels rely on these very fragile wetlands and saltmarshes on the South Carolina coast and directing that information to other agencies to help protect those places more effectively is also going to encompass the habitat needs of many other species,” Handmaker says. “What's kind of amazing about working in these coastal ecosystems is that it actually is also tied to protecting human communities.

The more we can pinpoint those things that are adversely affecting them, the more we can hopefully manage the species to prevent precipitous population declines.

“South Carolina has an amazing conservation legacy in terms of the ACE Basin and all of the salt marshes near Deveaux Bank where the birds are foraging during the day before they come to that island to roost every night. The reason that Deveaux Bank is filled with half of the total whimbrel population is because there's enough salt marsh for 20,000 birds to spread out and feed during the day. And the protection of that habitat is not just crucial for so many bird species, but it's also a buffer against sea level rise for the human communities nearby.”

Besides his extensive research on migratory birds, Senner has also collaborated on studies involving deer mice, some of which live in extreme cold conditions in the Rocky Mountains. Over time, those mice have evolved hemoglobin that can more efficiently carry oxygen in their blood — a vital tool in coping with the lower oxygen levels and extreme cold in their upper elevation habitat.

“We primarily work with species that inhabit extreme environments or exhibit extreme behaviors, as these species are predicted to be less capable of coping with rapid environmental changes,” Senner says. “We thought the godwit, which migrates from Chile to Alaska, was responding adequately to warming temperatures that caused spring to occur earlier in North America. But in recent years that species also has had to contend with droughts along their migration route in the middle of the U.S and increases in human disturbance of their winter environment in Chile.

“There were a couple of years recently in Alaska where they weren't able to respond to even greater increases in temperature so they had incredibly poor success at raising their young. Now, a few years later, when those young should be the ones successfully breeding and raising their own young, they're not there.”

The focal point of Senner’s research is identifying the tipping points affecting various migratory bird species, a research interest that requires an in-depth understanding of physiology, ecology and evolution.

“The more we can pinpoint those things that are adversely affecting them, the more we can hopefully manage the species to prevent precipitous population declines,” Senner says. “Everyone has their limits, but we have not yet come close to quantifying all of the ways in which individuals, whether they’re mice or birds or people, might differ in their ability to respond to different environments.”