The state Department of Education-funded project has been led by Scott Decker, a neuropsychologist and associate professor in the Department of Psychology whose research team has gathered extensive data from every school district in the state. The team has found wide disparities among districts in the percentage of children identified with learning disabilities and also has discovered that many students’ learning disabilities are not being identified until sixth or seventh grade. 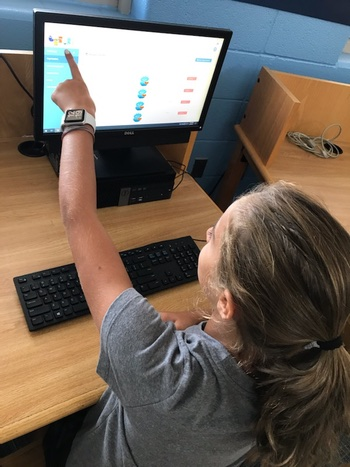 In addition to gathering data on learning disability assessment from every school district in the state, Scott Decker's research team has been developing a computerized assessment system that he says can streamline the process of identifying children with dsylexia in grades K-3.

“It’s likely that some districts are not identifying all of their students who have LD, and some are probably overidentifying their kids, perhaps because it’s the only services they can provide to students who are having academic problems,” Decker says.

“It probably means that a lot of these kids with a learning disability are just going through the system until it’s finally acknowledged, ‘You can’t read,’” Decker says. “And then it’s another year or two before the schools are officially identifying them with learning disabilities.”

It’s likely that some districts are not identifying all of their students who have LD (learning disabilities), and some are probably overidentifying their kids.

Decker and his research team have developed a computerized assessment system that he says can streamline the process of identifying children with dyslexia in grades K-3. They’ve been piloting the system at elementary schools in Ballentine and Lancaster, and the results match well with the best screening systems currently in use that require a much higher number of personnel to implement.

“Right now, a school anywhere in the state could download the computer program we’ve developed, and with just minimal direction be able to screen all of the students in their school,” Decker says.

Accurately identifying students with learning disabilities is challenging but only the first step. “What we’re hoping is that the assessment system we're piloting will provide very clear direction on what the learning disability problem is for each student and what the intervention should be,” Decker says. “The next step obvious step — and the most difficult — is building capacity in the schools for someone to actually do the interventions.”

Most children with dyslexia and other reading comprehension challenges benefit enormously from proper interventions, particularly when those interventions begin in early grades. About 2 percent of children with learning disabilities are unable to develop functional literacy skills, Decker says.

“The reasons for why they're having such difficulties in this one academic skill is a complete mystery,” he says. “They can learn math, they can learn all these other skills just fine, and they have an average or even higher than average intelligence in a lot of cases. There’s just one area that is really difficult for them.”

To help solve the mystery, Decker and his team of graduate students in school psychology have also started looking at brain activity in children with learning problems. Their hope is to find specific patterns of brain connectivity that can explain the disconnections some children experience in learning and eventually use that knowledge to identify children with learning disabilities before they start school.