In case of emergency

Law professor Thomas Crocker specializes in constitutional law, criminal procedure, free speech and democracy, national security and the Constitution. His new book, Overcoming Necessity: Emergency, Constraint, and the Meanings of American Constitutionalism (Yale University Press) is an analysis of how the concept of necessity, in conflict with constitutional commitments, creates dynamic challenges to constitutional governance, especially during times of emergency.

As you point out in your introduction, when a president takes the oath of office, it’s to the Constitution, not to the office. Yet when we talk about extralegal “necessity”— when a president overrides the Constitution claiming it’s for the good of the nation — right away, that’s outside the oath. I don’t know if that’s the best place to begin, but it seems like it could be the end.

Right. But there’s also a second way of looking at this — that that approach is too rigid because the president, as commander in chief, has a massive national security obligation and so should have maximum flexibility to do whatever is “necessary” to keep us safe. In this view, you may begin from the Constitution, but you could end up somewhere way outside of the Constitution. This is this conflict. 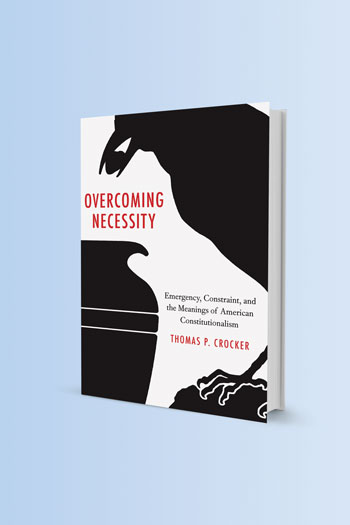 Law professor Thomas Crocker’s book analyzes the concept of necessity and how it creates dynamic challenges to constitutional governance.

You started this book thinking about the aftermath of 9/11 — most notably, the legal justifications for torture — but the use of emergency to justify policies that skirt the Constitution didn’t start with the Bush administration. Why that focus?

For a lot of people — maybe it’s just because it happened in our lifetimes — 9/11 is the most salient event. Also, the Bush administration used the crisis to advance a particular expansive conception of presidential power and was very self-conscious about it. It wasn’t accidental. They were doing things like torturing detainees and then legally justifying them, thereby advancing, if you will, an ideology about the role of the presidency that downplayed congressional and judicial checks and balances.

Which is very different from what Lincoln, for example, did during the Civil War.

Lincoln’s concern was preserving the union. He wasn’t advancing an ideology about his own power. In fact, what he did at times conflicted with his own view of the limits of presidential power. And he felt obligated to go to Congress, in July 1861, to explain everything he had done since Fort Sumter, such as suspend the writ of habeas corpus, and exactly why he had done it — and then to ask, after the fact, for permission to have done what he did. President Bush, by contrast, advanced a muscular, robust view of unconstrained presidential power and used the occasion of an emergency to do things that are unconstrained, like a torture policy and program, but also to legally justify them without going to Congress. That’s very different than Lincoln.

The Constitution is open to interpretation, not just as regards executive power. Is that, in fact, where its power lies? In the vagaries and contradictions that keep the debate going? Is that how we figure out at any given time in history what the Constitution means?

Exactly. It frames a set of principles and concepts that we use to debate the scope and limits to government power. It’s not often going to give us solid, uncontested answers. It’s going to provide the mechanisms over which we can discuss the best approach.

But necessity, emergency, constraint — these are squishy terms. Most of us, I hope, would agree that preserving the union is necessary, but another president may think a much smaller threat is also a valid case for necessity. How do we wrestle with these concepts when the definitions themselves aren’t fixed?

Even the subtitle of the book, Emergency, Constraint and the Meanings of American Constitutionalism, employs these key terms, but I can’t set out to define them. In practice and in theory, they’re up for grabs to some extent. They set the framework for us to grapple with the ambiguities: What do we do in a crisis? What is a crisis? What is the scope of presidential power to respond to a claimed crisis? This contingency is why thinking in advance about the relation between presidential power and necessity is so important for the next crisis.

You emphasized the S on “meanings”: "the Meanings of American Constitutionalism." There are many, and any one of them could be brought to bear. If you’re not a constitutional scholar — or even if you are — it’s enough to make your head spin.

To make everyone’s head spin! But it also reminds us of our responsibility to enter these debates in good faith because it’s our Constitution, the meanings are our meanings.

In broad strokes, what do you hope to contribute to this ongoing dialogue?

There’s a view that when push comes to shove, you do whatever is necessary. But that kind of thinking undermines our commitment to constitutional values. It’s constantly looking for the escape clause. This is an attempt to give readers the tools to reject that way of thinking, to instead recognize that constant tension you mention, and to resolve it through the framework of constitutional thinking.