College life has been a quite a ride for Ismael Delgado, who switched campuses, changed majors, flipped his bike, broke his collarbone, fell in love with scuba diving — and studied abroad in South Korea during the pandemic.

And if all of that weren’t enough, Delgado managed to turn his passion for laboratory research into a regular job in a COVID-testing lab and developed career plans for after graduation this December. It all started when he transferred to the University of South Carolina after his first freshman semester at a private institution in Virginia. 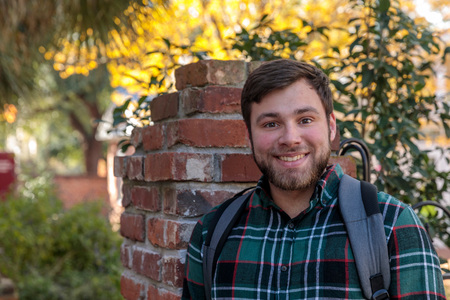 Ismael Delgado is part of the university's fall 2021 graduating class.

“I wanted to go out of state but found out that was expensive — life happens,” says Delgado, who had moved all over the country in a military family but has lived in South Carolina since seventh grade. “So I ended up transferring back home with some military benefits. I knew research was something I wanted to get involved in early on, and a family friend put me in touch with Dr. [Phil] Buckhaults in pharmacy.”

In Buckhaults’ lab, Delgado learned basic laboratory procedures before being taught the fundamental steps of polymerase chain reaction testing. Those skills would come in handy a few years later. Academically, Delgado was doing fine in chemistry but decided to give chemical engineering a try. That major turned out not to be a good fit, and he returned to the chemistry department to pursue a bachelor’s in biochemistry.

Because he was commuting to save money, Delgado knew he needed to push himself to meet more people and become more immersed in his college experience.

“I tried to get involved with a different club, basically every year,” he says, “and I started with Snaps, a music appreciation club. After that I did the American Institute for Chemical Engineers, and I met my roommate for the next two years there — I wasn’t doing too well with the commuting.”

After he switched back to being a chemistry major in his junior year, he dropped the chemical engineering club and joined a triathlon group. It was during a group bicycle ride through Table Rock State Park that he rolled into a pothole, flipped over the handlebars and broke his collarbone. To rehab after surgery, he started swimming and became a scuba diving enthusiast.

When the COVID-19 pandemic hit early in 2020, Delgado was looking for a study abroad location, but his first choice, Costa Rica, didn’t work out because of the virus. Instead, he went to Yonsei University in Seoul, South Korea, that summer where he picked up a couple of courses and managed to do a little exploring. “One of the most memorable experiences was being able to get out of the city and participate in a temple stay for the weekend to explore the countryside and beautiful mountain ranges,” he says. “I also was able to gain a new perspective on the pandemic by living in a different country for two months.”

When Buckhaults’ lab — in collaboration with other university scientists here and around the country — developed a saliva-based COVID test, Delgado found that his laboratory skills were in demand. He began working in pharmacy professor Carolyn Bannister’s lab, which became the campus COVID testing facility. “So now I’m one of the COVID testers in the lab, and I plan on sticking with that after graduation.”

“I haven’t really thought too much beyond that, other than at some point in the future I want to try working in another lab,” he says. “I like to try different things.”

Considering all that Delgado has tried out in four years at Carolina, there is no doubt about that last point.