New Student Government president has past and present Carolina connections

Reedy Newton was exactly three weeks old when her parents took her to her first University of South Carolina football game— a bowl game, no less, that the Gamecocks won. And though she was blissfully unaware of what was happening back then, she became immersed in the university in the years since.

The newly elected Student Government president grew up attending garnet-and-black sporting events with her family, but her family ties to the university go much deeper. 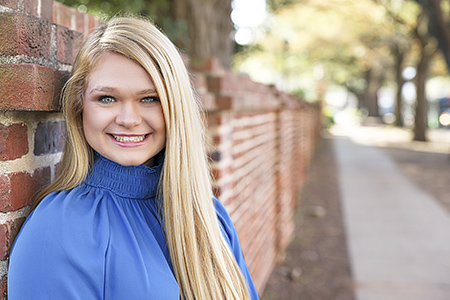 Reedy Newton's family has deep ties to the university, and Reedy and several other women serving on the Board of Trustees have their own unique connection.

“My family goes back four generations here — my great-grandparents actually met on the Horseshoe in 1928,” says Newton, a marketing major/mass communications minor who grew up on Hilton Head Island.

As Student Government president, Newton will be the student representative at the university’s Board of Trustees meetings, and that’s where more family ties emerge. Her mother, Rose Buyck Newton, was elected to serve on the board in 2018 — they are the first mother-daughter to serve on the board at the same time. Reedy Newton’s great-uncle, Mark W. Buyck Jr., served 28 years on the board.

Her grandmother, Frances Reedy Buyck, was the first woman at South Carolina to earn an MBA, in 1962. Rose Newton, a third-generation banker, followed her mother’s lead, earning an MBA from the business school in 1994. Might Reedy Newton join her mother and grandmother on that path? She plans to complete a master’s in mass communications degree on an accelerated track after graduating with her bachelor’s degree next year, but an MBA from South Carolina might be in her future, too.

“It would mean so much to follow in their footsteps, if that’s the path I want to take a little later on,” she says.

In the meantime, Reedy Newton has a Carolina student body to represent, and she’s excited about doing that in conjunction with the arrival this summer of the university’s 30th president, former university provost Michael Amiridis.

“Through my last three years here, I’ve been growing in confidence and resilience during the pandemic and learning so much about myself,” she says “I realized this is something I could do, and I’m passionate about seeing the direction the university can go in, especially with the new president coming in.”

Newton points to a long line of effective Student Government presidents who have preceded her and is grateful for the mentoring she’s received from several individuals during the past few years. In her position on the board, she’ll join another group with strong mentoring ties, as well. Rose Newton points out that four of the women who currently serve on the board were participants in Palmetto Girls State, a one-week leadership and citizenship training program.

“Molly Spearman [state superintendent of education and ex-officio member of the board] was director of Girls State when Leah Moody, Emma Morris and I were there,” Rose Newton says. “My mother, Frances, was one of the counselors at Girls State when Molly was a participant. And Reedy was at Girls State, too.”

Reedy Newton answered questions from the editors of UofSC's student email about her passion for Student Government and her priorities for the coming year.