Herman Phillips has always loved movies, but growing up near cattle farms in White Oak, South Carolina, the nearest movie theater was 50 miles away.

Movies became an escape for him, and one film in particular set the course for his future. The first time Phillips watched Star Wars at 7 years old, he says he immediately identified with Luke’s character — a kid living on a farm in the Outer Rim of the galaxy who gets swept up into a great adventure. 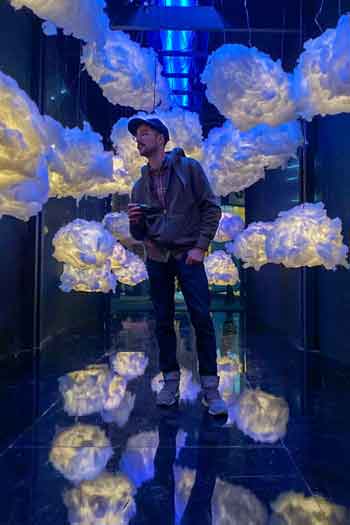 South Carolina alumnus Herman Phillips has worked on award-winning productions including Lucasfilm's The Mandalorian and The Book of Boba Fett.

“Movies and TV were my own little virtual window into other worlds, ways of life, cultures, experiences,” Phillips says. “I could go anywhere, including to a galaxy far, far away. It was pure magic.”

Watching that film awakened his sense of adventure, but it was Ken Burns’ Empire of Dreams about the making of the Star Wars trilogy that inspired Phillips to become a filmmaker.

Shortly after seeing that documentary, he got his first camera and started making stop-motion animated short films, writing scripts and diving into the world of Hollywood.

To realize his dream of becoming a filmmaker, Phillips enrolled at the University of South Carolina as an English and film and media studies double-major in the College of Arts and Sciences as well as the Honors College. He worked on productions with HBO, Hulu and Netflix. And he started his own production company to pay his way through school.

While still at UofSC, and with two years left before graduation, Phillips was recruited as a set production assistant on HBO’s Insecure in Los Angeles. One of the show’s assistant directors asked Phillips if he’d be willing to drop out of school to start working full-time. That wasn’t an option for Phillips, so he compromised.

“I knew I needed to finish my degree, so I dropped my English major, wrote my thesis, graduated a year early, then moved out to LA,” Phillips says.

That date turned out to be serendipitous, though, as May 25 was the 41st anniversary of the release of Star Wars, the film that started it all for Phillips.

Since then, Phillips has worked on award-winning productions including Lucasfilm's The Mandalorian, The Book of Boba Fett, HBO's Euphoria, Silicon Valley, Insecure and more.

And recently, he’s been recognized by Forbes for co-founding Cinapse, a film and television production management app that is revolutionizing the way studios handle production — by cutting paper out of the process.

We talked with Phillips about his time at UofSC and in Los Angeles and how both have contributed to his success.

What has making the Forbes 30 Under 30 list meant for you and your company?

It was a big surprise and a huge honor to be on that list. It feels a little out of place to be on it, especially with some of the other people who are on the list; there’s someone on the list who is revitalizing the drive-in movie experience; [actress] Miranda Cosgrove is on the list. I’m a very behind-the-scenes person, so getting on the list was kind of jarring in that way. But being recognized for the value we are bringing to the industry was a validating momentfor our company.

Tell me about your company and how the Cinapse app supports digital production management.

Cinapse makes it easy for a film or television production to organize the flood of information, documentation and production paperwork that is generated on a daily basis. Everything in the film industry still runs onpaper or on spreadsheets, and when you’re managing a 500-person crew, that comes out to be about 1.5-2 million sheets of paper or more on a given production. What we’re hoping to do at Cinapse is make it so you never have to use a sheet of paper for your production, saving trees and saving everyone time. And we collect metrics. We take this information about the schedule and what’s happening on the set right now, and we generate a statistical breakdown of how much time you’re spending in each category.

What was your vision at the start of your company?

I’ve seen first-hand just how archaic and chaotic production is when everything is done on paper, and I wrote my undergraduate thesis at UofSC about production management software and labor relations in the film industry. So, I’ve always had an interest in solving this puzzle of logistics, communications and on-set operations.

How would you describe your company’s success?

A lot of our success so far has been connecting with crew members, from props to hair and makeup, special effects totransportation departments. We have done hundreds of user interviews with crew members. Taking their experiences very seriously [and] having empathy for the users of our platform is critical to making a product that works and solves our customers' problems.

How would you say your time at Carolina prepared you for entering the film and TV industry?

The Honors College and Carolina in general prepared me to network really well and to interact with all kinds of people from all walks of life, which is a huge part of my job now.

I took a class as part of my film and media studies major called Ward One Critical Interactives with Duncan Buell and Heidi Cooley that helped me in a way that I never thought it would. The class was a human-computer interaction class. We developed an app on the history of urban renewal in Columbia and the process of urbanization and gentrification of the Ward One District in Columbia. We researched Celia Dial Saxon and worked with software engineers, creatives and others to help tell the story. And now I’m building an app for the film industry, so that was a cool connection.

Also, through the Honors College, just having the opportunity to do what I wanted to with my own thesis was really helpful. I got really interested, after spending two summers working in Los Angeles, in the hierarchy of our labor structure and how it hasn’t changed in the 100-year history of the industry.

Why study filmmaking at UofSC instead of a dedicated film school?

I have a bunch of friends who went to those film schools, and I don’t think it would have actually made a difference for me. What matters is what you do with the time and opportunities of whatever place you find yourself in.

Do you have a favorite memory from Carolina?

Really it was just forming those relationships with my classmates who have now become my closest friends. I met my partner at Carolina, and a lot of my close friends who I went to school with moved out here with me; several are literally my neighbors now. Having that community of friends would have to be my favorite part.