Give Fabio Matta and his team a pile of dirt, a little cement and some recycled plastic, and they can build a wall capable of withstanding the destructive power of an EF3 tornado with 160 mph wind gusts.

For the past 10 years, Matta, an associate professor of civil and environmental engineering, has been engineering earthen building blocks made from local soil. Up close, the blocks don’t look like anything special, but their simplicity is the appeal — the blocks don’t require firing in energy-intensive kiln furnaces and can stand up to the worst Mother Nature can throw at them.

“We’ve taken a material that is cheap and locally sourced and used science and engineering to make it extraordinarily resistant to hurricanes, tornadoes and possibly earthquakes,” says Matta, whose earthen block research was inspired in Colorado at a 2010 NSF workshop on sustainable construction materials.

The idea for the material came to me at the dentist’s office while leafing through a copy of National Geographic Kids. There was an article about plastic water bottles in landfills, and I started thinking about non­biodegradable PET plastic.

Working with undergraduate and graduate students in his research group, Matta began by analyzing house structures to define strength targets for the blocks, then testing combinations of soil and water with different amounts of cement for the blocks and the mortar to hold them together. The team found that only a small amount of cement — about 6 percent by weight — was needed to make blocks with the desired strength.

In collaboration with Ece Erdogmus at the University of Nebraska and Ester Obonyo at the University of Florida, Matta’s initial NSF-funded project was to develop an earthen masonry capable of resisting the wind pressure caused by an EF3 tornado, which accounts for about 90 percent of tornadoes recorded in the United States. His team used a hydraulic press to manufacture the blocks, and prototyped an earthen masonry system capable of resisting the target wind pressures. Then another question came up: Can the earthen masonry be further enhanced to become suitable for safety shelters by resisting high-energy impact of flying debris? 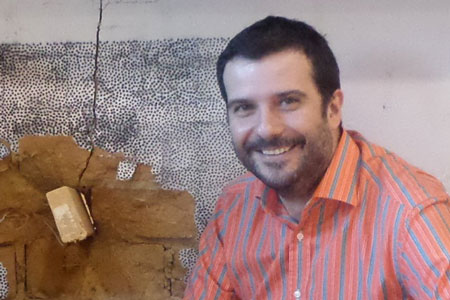 Fabio Matta is an associate professor of civil and environmental engineering at UofSC.

The team got to work and used off-the-shelf parts to build a cannon capable of hurling a 15-pound piece of two-by-four lumber at 100 mph, which mimics the destructive force of an EF3 tornado as required by FEMA.

Initial test results were not encouraging — the two-by-four shot out of the cannon and sliced through the earthen brick wall like butter — but Matta devised a clever solution. “The idea for the material came to me at the dentist’s office while leafing through a copy of National Geographic Kids,” he says. “There was an article about plastic water bottles in landfills, and I started thinking about non­biodegradable PET plastic.”

Matta and his team, led by former doctoral student Mabel Cuéllar-Azcárate, cut sheets of recycled PET plastic into narrow strips with a pasta machine and embedded them into the earthen blocks to enhance damage resistance. They then incorporated cheap microfibers into the mortar, prototyped a modified earthen masonry with fiber reinforcement and load-tested specimens to verify a radical change from a strong but brittle material into a stronger and damage-resistant one. At this point, the team was ready for more impact tests. Another two-by-four board was loaded into the cannon, aimed at the plastic-strip-reinforced earthen block wall and — voilá!

“We stopped the two-by-four with a 7-inch thick wall, which is much thinner than we would ever use for a structural wall,” Matta says. “We shot the same size two-by-four at standard concrete masonry walls, and one of them collapsed and the other one basically exploded.”

Matta says it’s been fun and intellectually rewarding to demonstrate the power of science and engineering in transforming unfired dirt into a building material that can resist the extreme pressures and impacts experienced under a strong tornado. Recently, the International Building Code has introduced a chapter on adobe construction, but adoption of earthen blocks for residential or commercial construction is many years away, Matta says. 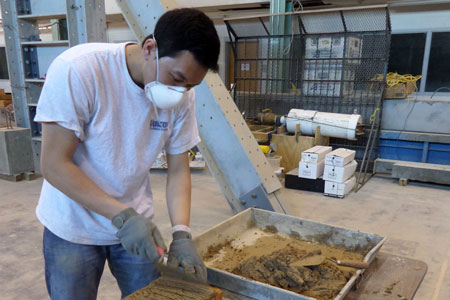 “There is no comprehensive code of practice to build with earthen masonry, so there’s no incentive for builders to take the risk,” he says.

But Matta, in collaboration with Michele Barbato at the University of California, Davis, has been pushing on with more research sponsored by NSF and the University of South Carolina’s ASPIRE funding, which could strengthen the case for earthen block construction and the commensurate building codes. For now, the team is working on earthquake-resistant earthen masonry houses,  and looking at the possibility of dry stacking blocks with no mortar, which would make wall construction easier and faster.

“So can we disrupt a market? Can we disrupt an established way to build? I think we are at the point where we can actually make meaningful steps toward this because of all the research done in the past few years, not only by us but by other researchers around the world,” Matta says. “The literature is accumulating, and we are at the point where, in my mind, we can actually push realistically towards establishing a building code for these materials.

“It’s not like a pie in the sky dream. It’s a dream that is rooted in the tangible results we have obtained through rigorous research, in large part thanks to the work of smart and gritty graduate and undergraduate assistants.”