Sarah met the man who would become her sex trafficker at a club on the West Coast. (In order to protect her identity, her last name is not being used.)

Her friend was a singer who’d recently made a CD, so the man’s claim of being in the music industry was appealing. Before long, her friend “got a weird vibe and had no interest in working with him,” she says — but Sarah didn’t pick up on the same signals. After a month of his persistence, she agreed to a date. It was the start of a difficult period in Sarah’s life.

The man, who was nearly twice her age, introduced Sarah to people he said were part of the music industry. He also urged her to connect him with people she felt had money and influence. She attended meetings with them, believing the purpose was to establish business ties. But eventually an unspoken expectation became clear: She was supposed to sleep with these men. When she told them sex was not part of the agreement, they responded with, “That’s not what we were told.”

Feeling scared and confused, Sarah left the man — but was soon unable to support herself and depended on him again. When he pressured her to use drugs, she found it took her mind to a different place and cemented his hold on her.

Having spent most of her adolescence in the foster care system, Sarah had weak family ties, something that is common in the background of trafficking victims. Combine that with being a young woman in her early 20s navigating an unfamiliar city, and it is a perfect recipe for a trafficking target.

One day, Sarah’s trafficker claimed to be pursuing a real estate venture that would make a lot of money. But he had no intention of bringing Sarah along to a better life. In his mind, she was no longer useful to him. He left and never came back.

Alone with nothing and facing withdrawal from drugs, she had no direction.

“I wanted to die,” she remembers thinking.

Coming out the other side

Unable to afford rent, Sarah sought refuge in a shelter, through which she attended group sessions, stayed off drugs and got a job. These achievements earned her entry into a new shelter program that gave her a private room and amenities.  After hearing Sarah’s story, a counselor recommended she leave the state for her own safety, as traffickers are sometimes retaliatory. Sarah moved to a North Carolina shelter and eventually returned to her home state of South Carolina. 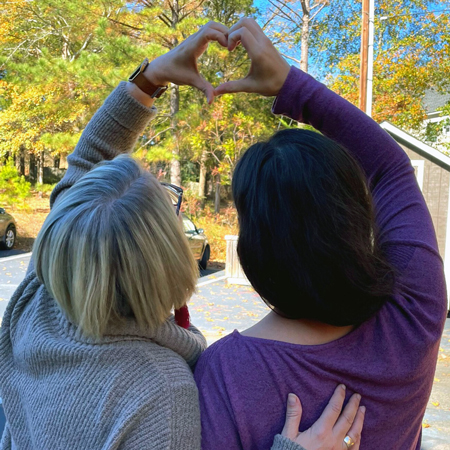 “It’s really difficult when you’ve been through a lot of trauma because it all seems to kind of mush together, the good stuff and the bad stuff,” she says. “And that’s what makes it so hard to see someone you thought was your partner as a monster — because you still want to be with them.”

At Pathways to Healing, Sarah received counseling. She struggled with feelings of guilt and naivete, thinking what happened was her fault. She didn’t feel her situation was that important because it seemed mild in comparison to other victims’ stories. But Sarah learned that trafficking has different forms.

“It sounds cliché, but my limited knowledge of trafficking could have been compared to the Taken movie. That’s what I thought trafficking was. But in my case, nobody put their hand over my mouth, dragged me into a room, beat me, chained me up, and took me to a different country.”

According to the National Human Trafficking Hotline, sex trafficking is a form of modern-day slavery in which individuals perform commercial sex through the use of force, fraud and coercion. And the Polaris Project states that while abductions can occur, the majority of traffickers use psychological tactics to force their victims into performing commercial sex. In 2020, there were 10,836 sex trafficking victims identified throughout the country. That number does not account for the victims who did not report or those who were victims of other forms of trafficking.

Years later, Sarah has a new life. She’s studying human services through Palmetto College at the University of South Carolina Beaufort, loving on her dog and spending time with her son and fiancé.

Sarah always wanted a career in social work, and her trafficking experience steered her to pursue a career in counseling as she hopes to make a difference in the lives of others. She volunteers at Lighthouse for Life, a local human trafficking nonprofit, helping the organization build and maintain nationwide resource contacts. She’s arranged to do her internship there and plans to work there after she graduates. In fact, she hopes to be its first in-house counselor.

This is the first time Sarah has shared her story for publication. She says talking about it is part of the healing process and she hopes that by telling others what happened to her, and through her volunteer work, she can help shed light on sex trafficking and bring hope and healing to people going through similar experiences.

“It heals me to heal other people, knowing that I can give back what I know to someone else.”

The journey to healing is not an easy one. But the reward on the other side is the new life.

The psychology of survival

UofSC College of Social Work clinical assistant professor Patrice Penney has more than 30 years of experience as a clinical social worker and clinical supervisor. She says a state of fear when a person is trafficked can cause human instincts to shift. The brain gets good at survival, but it doesn’t have the resources in those moments to think, reflect, stop, ponder or plan.

“Our thinking brains really shut down and our survival brains kick in, which means we’re going to feel emotionally fried, completely overwhelmed,” Penney says. “The brain stem, which coordinates all of our bodily functions, just kicks us into flight, fight or freeze mode, so we really don’t have the opportunity to use our full brain competencies.”

According to Penney, victims learn helplessness and feel out of control because of the coercion they experience. And when they go to family, but their support isn’t available, it reinforces for the victims that there are no options. Traffickers often encourage drug use as it makes the victim dependent and sometimes in debt to them.

“It’s not cognitive activity; it’s more a felt sense of trying to speak up or trying to escape won’t do any good. The fact that (Sarah) did is remarkable,” Penney says.

UofSC School of Law associate professor Aparna Polavarapu says the U.S. legal system focuses on punishment and sometimes the needs of victims and survivors are overshadowed as a result. She stresses the importance of proper training for all service providers to help ensure positive support is available for those who seek help.

“The truth is we don’t have a system that is very supportive to survivors of many types of harms,” Polavarapu says. “We ought to be thinking about that as we’re asking why people don’t report, why they don’t seek help. Are we offering the kind of help that people need?”

Sarah was fortunate she got the help she needed and was able to turn her life around. She says everything in life had more meaning once she escaped trafficking and she developed an appreciation for the things she had once taken for granted. Sarah had always put UofSC on a pedestal and, after encouragement from a family member who was a Gamecock, she decided to make education part of her new life.

“I always saw UofSC as the staple big college of South Carolina that had higher standards,” she says. “I knew I’d be proud to say I graduated from here because you have to work for it, not everyone is admitted. I respect the level of education I’m getting. It’s something I’m proud of.”

She’s graduating with a bachelor’s degree in human services next year and plans on pursuing a master’s degree so she can become a certified counselor. She has a fiancé who’s supported her throughout her studies. That support, along with the understanding and guidance she’s gotten from Lighthouse for Life and Pathways to Healing, has given Sarah the courage to forge a new life for herself.

“The journey to healing is not an easy one. But the reward on the other side of it is the new life, the life you always wanted, the one where you are happy and fulfilled, the life that never comes in trafficking,” Sarah says. “There is salvation through the healing.”

“If you’re a serviceperson out there making deliveries or doing electrical work at people’s houses and you see someone behind a window who then disappears, call and report it,” Penney says. “There are people who will listen to you. We need more awareness about what trafficking looks like and it’s not an abduction in broad daylight.”

Several websites provide information about the trauma leading to and resulting from human trafficking, including how to report suspected trafficking and where to seek help to escape trafficking.

You can call the National Human Trafficking Hotline at 888-373-7888 if you or someone you know is a victim of human trafficking. Calls are confidential and are accepted all day every day.