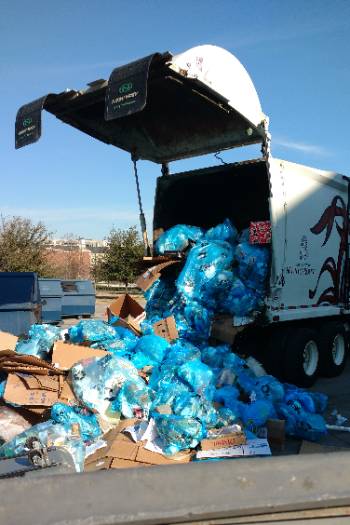 The Gamecocks and the Tigers will compete over just about anything — not just football, basketball and the many other intercollegiate athletics — but also who donates the most blood and now, who does the best job of recycling and waste reduction.

This year’s Race 2 Zero Waste, previously known as Recyclemania, saw South Carolina take the lead in the competition with Clemson for the first time in the 16 years South Carolina has been participating.

“For the first time ever, our ranking is slightly higher than Clemson in several categories,” says Larry Cook, the director of the Office of Sustainability on campus. “That’s kind of a gratifying thing for us as we work to improve our program and kind of catch up to the investment that institutions like Clemson and others have made in waste diversion.”

Cook says UofSC’s collection program is actually modeled on Clemson’s. He says even with the rivalry, the Tigers have been supportive of Carolina’s waste-reduction efforts.

While this progress in waste reduction on campus was documented during the eight weeks of Race 2 Zero Waste, it really is just a snapshot of the year-round waste-reduction efforts being made at UofSC. This year’s approach to the competition was simply maintaining regular services and collecting the data.

“In the past, we’ve had events just to raise awareness,” says Cook. “The idea with the competition is not that you actually recycle more during that period — it would be really hard and kind of silly. If there was a way that we could strategically get more material for those two months, why wouldn’t we strategically get that material for the rest of the year?”

The materials Carolina’s waste and recycling collection program deals with range from typical curbside recyclables and trash to desks and mattresses from residence halls.

The key to improvement has been getting dedicated personnel, says Dameon Hopkins, a waste and recycling manager on campus.

“To have an actual supervisor on site now that understands, that knows what our end goal is, it helped a lot,” he says.

The campus may never reach the ultimate goal of zero waste, but this year’s success is evidence UofSC is heading in the right direction.

“We will probably never reach a point where we have the perfect system and everything is wonderful,” says Cook. “This is going to be constant work.”