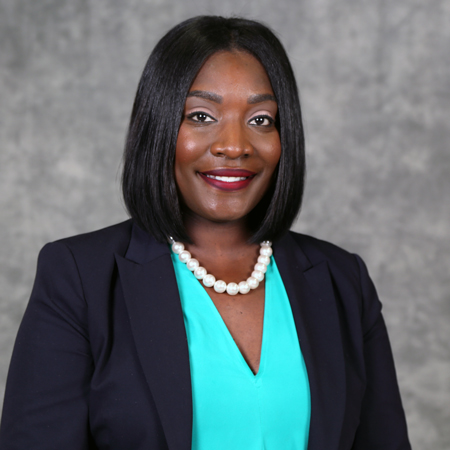 Rushondra James, assistant dean for students services in the College of Information and Communications, begins her term as staff senate president.

Rushondra James never planned on being staff senate president. When she first joined the University of South Carolina staff in 2009, she didn’t even plan on being here long.

But a lot can happen in 13 years. A temporary position working with undergraduates in the College of Social Work expanded to a full-time gig, an adjunct instructor role and more and more responsibility. Then, in 2017, she moved to the College of Information and Communications, where she has spent the past five years as an assistant dean for student services.

By the time staff senate formed as an official university body in 2021, James was committed to using the institutional knowledge she had acquired to improve employer-employee relations across campus. She also looked forward to making new contacts from other units and collaborating with them on new initiatives.

“Being a longtime staffer, you see a lot of changes, you hear a lot, you see people come and go, and you begin to see areas that you can help improve upon,” she says. “You have a perspective that's unique.”

So when she was tapped to be vice president during the senate’s inaugural year, she naturally answered the call. And when she was subsequently tapped to be president, succeeding Shelley Dempsey, she may have been a little more hesitant, but she was still ready for the challenge.

“I initially was just going to do the VP role, I didn’t want I want to be the president,” she says. “However, I'm always a believer that if it scares you, do it. That's when you lean in.”

Besides, the role suits her personality and capitalizes on her skillset. As an undergrad at Howard University, where James earned a bachelor’s in journalism before earning a master’s in social work and a Ph.D. in educational leadership and policy studies here, the Orangeburg, South Carolina, native developed the skills to lead and the confidence to be a vocal advocate for her peers and constituents.

Being a longtime staffer, you see a lot of changes, you hear a lot, you see people come and go, and you begin to see areas that you can help improve upon.

“I'm not one to shy away from talking and speaking my mind,” she explains. “I figure, ‘Well, if I'm going to say something, I want it to be in a place where it could be most effective, and I think the most effective place is in a staff senate environment.”

As outgoing vice president, James is proud of the work done during the senate’s inaugural year. In addition to passing resolutions relating to covid mask protocol and diversity, equity and inclusion, the newly-formed staff senate began the push for better representation on university-wide job searches and established a foundation for the body’s future.

“The challenge of the inaugural year was just having to create a process,” she says. “You don't have a blueprint.”

Now, as the body’s second president, she wants to build on that blueprint — “to ride the momentum,” as she puts it — by advocating on behalf of fellow staff and amplifying staff voices and staff presence on campus.

“I hope a year from now to have achieved to at least two things,” she says. “One is professional development of staff senate, to help all senators feel empowered in their current work. The second is to continue to see staff and the staff senate inserted in the conversation. When people think 'faculty and student,' they should also, automatically, think 'staff' — we need that inclusion in thought, word and deed.”