The University of South Carolina has announced David Banush will lead the University Libraries, effective Nov. 1.

“We are pleased to welcome David to the Carolina family, where his extensive experience and his commitment to encouraging creative and inclusive partnerships will enhance the work of our University Libraries,” President Michael Amiridis says. “I look forward to his leadership in this role, which impacts so many areas of interest in our university and the greater community." 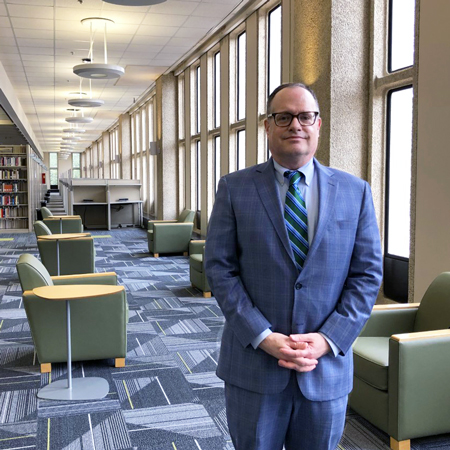 “The renovation of the South Caroliniana Library, the nation’s oldest free-standing university library building, is a perfect metaphor for all libraries today: preserving and honoring the best of the old while adapting for the future." — David Banush

Banush currently serves as dean of libraries and academic information resources at Tulane University, a role he assumed in 2015.

“David is a world-class addition to the University of South Carolina,” says Donna Arnett, provost and executive vice president for academic affairs. “He is a respected and thoughtful leader within the larger libraries’ community, and his previous success at Tulane shows the positive effect he can have on an organization. The University Libraries are essential to this university’s teaching and research missions, and David’s leadership promises to further heighten the libraries’ already tremendous impact on campus.”

Before joining Tulane Libraries, Banush served as Associate University Librarian for Access Services and Collection Management at Brown University in Providence, Rhode Island. Prior to that appointment, he held several positions of increasing responsibility at Cornell University Library in Ithaca, New York.

Banush will succeed one of the university’s longest serving deans, Tom McNally, whose term has spanned more than 13 years. McNally has been at the university for 30 years and will return to a faculty role.

“I am thrilled to be joining the University of South Carolina at this important juncture,” Banush says. “The renovation of the South Caroliniana Library, the nation’s oldest free-standing university library building, is a perfect metaphor for all libraries today: preserving and honoring the best of the old while adapting for the future. The leadership of President Amiridis and Provost Arnett, along with the deans and other senior members of the administrative team, is inspiring. I am delighted to be a part of it.”