Can’t stand the heat? Give it a sec. It’s even worse around the corner.

If you live in a hot urban environment like Columbia, South Carolina — a city infamously branded “famously hot” — you know how it goes. One minute, you’re merely sweating your way down the sidewalk; the next, you’re ready to melt. Or straight up combust.

You just entered what’s known as an urban heat island, where heat captured by buildings and roads increases local temperatures. And in the age of climate change, these areas of elevated temperatures are not only uncomfortable; they can be downright dangerous.

How dangerous? According to the National Oceanic and Atmospheric Administration, which released a study on heat islands Nov. 17, extreme heat kills more Americans than any other weather event.

Longtime University of South Carolina geography professor Kirstin Dow has devoted much of her career to understanding climate impact, vulnerability and adaptation. In other words, she recognizes the problems posed by our warming planet and is determined to help mitigate them, most recently by mapping heat islands so that urban planners can make better decisions about where to plant trees, generate more shade or support investment in affordable renewable energy and energy efficiency.

Last year, Dow and colleagues did just that when they were approached by a group from the Charleston Medical District to map the heat risks due to concern that vulnerable patients were at risk just moving between campus health care facilities on hot summer days.

“We just can’t take Southern heat for granted, especially when it comes with tremendous humidity,” says Dow. “People with pre-existing health conditions, like some of the patients at MUSC, are at substantial risk.”

Of course, it gets even hotter in the Capital City, which is what prompted Dow to pursue a similar project closer to the University of South Carolina campus. On two days this past August, Dow, graduate assistant Grant Farmer and volunteer citizen scientists began traversing the Midlands in search of the heat islands that help make the City of Columbia and surrounding municipalities so famously hot.

Using sensors attached to PVC pipe extended from a car’s passenger side window, 16 teams of two volunteers each collected data in the morning, afternoon and evening. All told, the volunteers canvassed 190 square miles in Columbia, Forest Acres, West Columbia, Cayce and urbanized parts of Richland County.

The team also deployed stationary sensors to extend their understanding with more complete measurements of temperature and humidity throughout the day. These data sets were then processed along with satellite imagery to give a more comprehensive, fine-grained picture of hotspots throughout the canvassed region.

“The way people usually talk about heat islands, and the way they show them in your introductory textbook, makes it look like some big dome sits over the city, but it’s actually not like that,” says Dow. “These are micro islands. You can feel them. You can tell the difference between one stretch of road and the next. It’s really a dramatic experience.”

The final GIS dataset will facilitate a range of analyses and could impact the planning, placement and landscaping of bus stops, bicycle routes, pedestrian corridors and communal spaces like parks and plazas throughout the Midlands.

The City of Columbia’s Tree and Appearance Commission encouraged Dow’s research and is particularly interested in how it could help them in their quest to make the city more livable and attractive year-round. The Richland County Conservation Commission and Columbia Green are also on board and provided additional funding.

“There’s lots of opportunities to understand where we have heat exposure, and that’s why people are so excited about doing it,” says Dow.

And the potential for fruitful collaboration extends beyond City Hall. Dow’s research could also dovetail with other important cross-disciplinary research at the University of South Carolina, which could in turn lead to better outcomes in other areas.

“There are so many ways that people can work with this data, whether we’re talking about public health or sociology or community education,” she says. “We’ve got terrific faculty all over this university who might be interested in collaborating. We’re excited to share the data and help make those connections.” 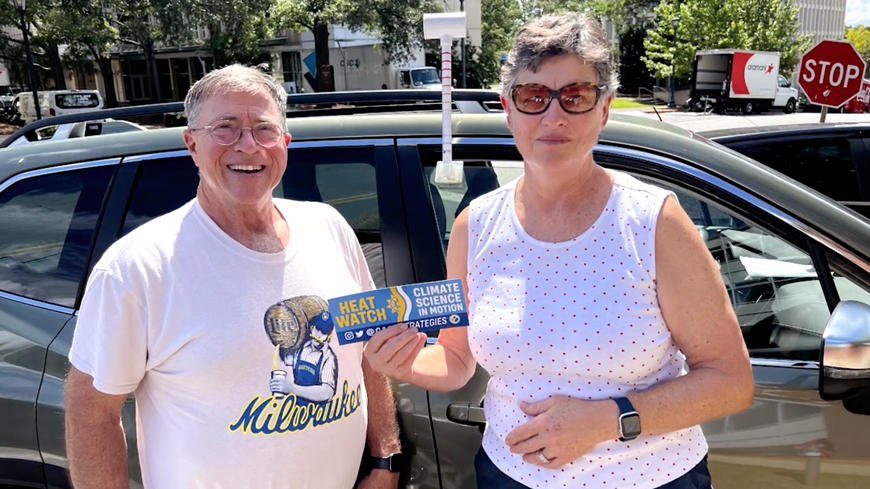