There is transformative power in a college education. In South Carolina, bachelor’s degree holders earn, on average, $15,000 a year more than those with only an associate degree. Moreover, a person with a bachelor’s degree will earn, on average, $1.2 million more during their working career. At a time when some question the value of a college degree, it is more evident than ever that education is a universally recognized distinction that enables upward mobility and expands opportunity.

Just a few years after its launch, USC Palmetto College is flourishing. Between the Fall 2013 and Fall 2018 semesters, we served nearly 6,000 students each year, reaching every county in the state. This includes an associate degree program enrollment of nearly 5,000 per year at the campuses. Of the over 1,300 online courses offered since its inception, more than 33,000 seats have been filled and Palmetto College Online has awarded over 1,600 bachelor’s degrees as of Spring 2019.

Ryan West has served in the military for 20 years, and he was trained to tackle any challenging situation. A conversation with his then ten-year-old son presented him with a different kind of challenge. His son declared that he would earn his own bachelor’s degree before Ryan could do so. He accepted the challenge, enrolling in USC Palmetto College. He completed a B.A. in Organizational Leadership, with honors, from USC Columbia in 2016. Now, he’s planning for a career post-military service.

Nicole Ramsey completed a B.A. in Elementary Education full-time through USC Columbia while working 50-plus hours a week managing retail. She is also raising a young son. Completing her degree in 2018 allowed her to achieve her dream of becoming a teacher, and she was recently named “Rookie Teacher of the Year” at the Moncks Corner, S.C. school where she teaches fifth grade.

As a state trooper, Dirk Bron Jr. didn’t work the kind of schedule convenient for earning a bachelor’s degree. His work sometimes required long nights and early mornings in different locations throughout the state — not the ideal when planning semester-long academic commitments. Prior to enrolling in online classes through Palmetto College Online, Dirk attended two Regional Palmetto Colleges: USC Salkehatchie and USC Union, and earned an associate degree from the latter. Completing a B.S. in Criminal Justice from USC Upstate through Palmetto College made a career transition possible. In July 2017, he was appointed an associate chief magistrate in Laurens County, S.C. — an appointment that wouldn’t be possible without a four-year degree.

Chan Samreth is a registered nurse in Spartanburg who needed a bachelor’s degree to advance in her profession, while juggling a busy work schedule and family responsibilities. Completing USC Upstate’s RN-BSN Program through Palmetto College has made all the difference in the world.

Andrew Verma worked in finance for 12 years when he reached a point from which he would not have been able to advance much further. After completing an associate degree at his local technical college, he entered Palmetto College and earned a B.S. in Business Administration in 2015. Today, he manages a team that encompasses more than 700 within a global financial institution.

Their stories are emblematic of the promise and potential of a college education earned through Palmetto College and its online partners at the University of South Carolina’s Columbia Campus, USC Aiken, USC Beaufort and USC Upstate.

Learn more about Palmetto College and our first five years of success. 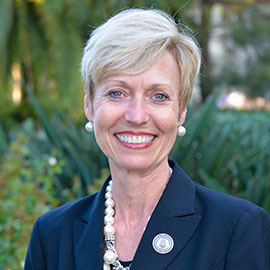