Congratulations to Dr Nathan Senner and his lab for his quote in the NYT today article  focusing on new instrumentation for tracking bird migrations. See  article . 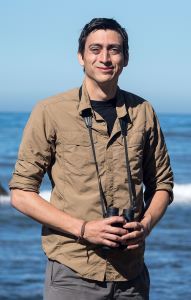 Elizabeth S. Davenport has been named the winner of the William A. Mould Award by the South Carolina Honors College.  William A. Mould was the founding Dean of the SCHC, and a strong proponent of the senior thesis requirement.  Each year, the award is given to recognize the research, creativity, and impact of the best honors thesis submitted to the SCHC.  Davenport completed her thesis, “The Temperature-Dependent Effects of Spontaneous Mutations on Life-History Traits,” in the lab of Biology professor Jeff Dudycha with the help of more than 100,000 individuals of the microcrustacean species Daphnia pulex.  Her thesis juxtaposed evolutionary biology, genetics, and climate change, testing whether mutations have more negative effects on fitness when expressed in warmer environments.  She will be continuing her studies of evolutionary biology using Daphnia this coming Fall as a Ph.D. student in the Department of Ecology & Evolutionary Biology at the University of Michigan. 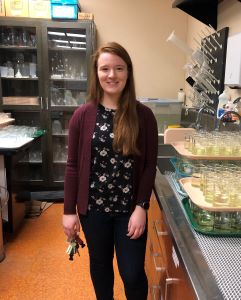 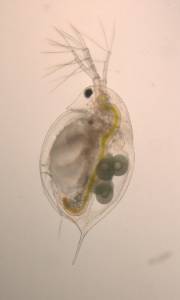 The Office of Undergraduate Research announced that two faculty in Biological Sciences, Dr. Dan Speiser and Dr. Jeff Dudycha are co-recipients of the 2020 Distinguished Undergraduate Research Mentor Award.  The Speiser Lab operates at the intersection of physiology, evolutionary biology, and neuroscience to understand how complex visual systems evolve.  The Dudycha Lab studies evolutionary processes using a combination of genetic and ecological approaches to understand diverse topics including reproduction, phenotypic plasticity, photosynthesis, and vision.

Congratulations to Georgina Anderson for being awarded the Dean's Award for Excellence in Leadership.  The award is given to graduate students who demonstrate leadership, on campus, in their academic discipline or in the community.

Congratulations to Dr. Hexin Chen and the Chen Lab for receiving a National Cancer Institute (NCI)/NIH grant for their upcoming study on "Nanoparticle-delivered miR-489 rejuvenates anthracycline-based chemotherapy." The award is for $115,045.00.

Although 2020 has brought its share of challenges, we are pleased to announce some uplifting news.  Below is a list of graduate students in Biological Sciences (including several who are joining the Department in Fall 2020) whose achievements in their field have been recognized with the awards listed.

We congratulate each in their outstanding accomplishments!

Congratulations to Alan Waldman and his research team for their new NIH grant, "Lamin A and the Fidelity of DNA Double-Strand Break Repair”!, funded at $74,500 for year 1 of 2 years.

Congratulations to the Strattman Lab

Congratulations to Professor David Reisman who was awarded a grant, entitled "Mechanism of Action of a p53 Intron-encoded lncRNA in Myeloid Leukemia Cell Differentiation”, from the the Children's Leukemia Research Association!

Alissa Armstrong's research is shedding light on links between nutrition, obesity and diseases such as diabetes or cancer.